Last Monday night I went to Mazza restaurant in Salt Lake City’s 9th and 9th neighborhood. (There is another Mazza in the 15th and 15th area) I have known the owner Ali for some time and he is a customer of mine at the Wine Store. I have several Lebanese wine offerings at the store, and I’m quite a fan of these affordable wines, which pair well with Middle Eastern food. 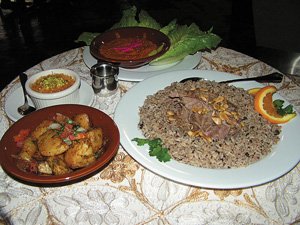 I took two of my students from Ecole Dijon to Mazza — Sally Hoffman and Melisa Geneaux. We had a lot of fun and really enjoyed the evening. Let me tell you about it.

Mazza is on a prime corner in 9th and 9th neighborhood, and its welcoming feel, décor and ambiance are very, very nice. Ali has combined contemporary styles with Middle Eastern accents in a tasteful way. Sometimes, I think, restaurants with a very distinct theme tend to overdue the decorating, but not here.

As for the food itself, Mazza was a nice surprise, and I ate several things I had never tasted before.

We asked our waitress to bring us three authentic appetizers we could all share. She brought us some potatoes “harra,” which are sautéed or perhaps oven-cooked with garlic, spices and olive oil. I thought they were a little dark in color, but that may be the way they eat them in Lebanon. Overall, they were tasty and quite unusual as an appetizer. We also had two “dips” served with excellent homemade flatbread. Hummus, the house favorite, was white, lemony and delicious. It was so much creamier than the one I make, I almost thought it had been passed through a sieve. We had another dip called Mahamra which we all just adored. I’ll quote from the menu to tell you what is in it.

We were all delighted at the thought of spreading the Mahamra on romaine lettuce. It’s so rare when I taste something so entirely new. The Mahamra on the crisp, fresh lettuce was by far the “cleanest” flavor of the night, and we all thought it was awesome.

With our appetizers, Melisa and I had requested a glass of the Kafra Rose du Chateau, (the Wine Store carries this wine as a special order item). When we tasted it, Sally got a glass, too. It’s a European-style dry rose: delicious and light peach in color with a green apple finish. We loved it and it went well with our food choices.

Our waitress said there were a few falafel balls left so we tasted those also. Falafel are veggie meatballs that are made from a batter of chic peas (or garbanzo beans, as we call them in the United States) and are deep fried (I have prepared them myself in the past). Although these were nicely made, again, I thought they were a bit dark and over cooked. Falafel is usually served in a pita pocket and topped with a yogurt/dill/cucumber sauce.

I then ordered the Lamb Dolaa, which is braised lamb taken from the shoulder part for its leaner cut and flavor. The lamb is then slow-cooked in a mixture of nine different spices and served on a bed of rice cooked in lamb broth. The dish is then garnished with fried pine nuts and almonds and served with a side of cucumber-yogurt sauce. I really liked all the flavors of this dish, but I have to say, there was really no attention to the appearance or the plating of such nice food. The lamb was tender but a bit dry and looked a little lonely and misplaced on top of the rice — but I loved the crunchy almonds! There was also a small amount of the traditional cucumber dressing on the plate and serving was ample. I was full from eating it.

Melisa and Sally had chosen “sandwich” items which, as it turned out, were something I would have wanted more for lunch. Melisa’s dish was more like a panini with toppings like fresh tomatoes, and Sally’s choice was more like a pita pocket. But they both enjoyed their selections.

Then it was time for dessert, which we all enjoyed. The pastries we had were very Greek in nature — or, maybe the Greeks stole their pastries from countries to the East. We so loved the filo dough cannoli with a custard-like filling that we ordered another one. The baklava was also delicious and homemade. All the desserts we tasted were laced with syrup flavored with orange-blossom water. Ali served us a beautiful, sort-of Lebanese crème brûlée — a light and creamy, pot-de-crème topped with a streusel made from tiny vermicelli. This, again, was a totally new experience for me.

But you know, I have to say, after visiting some of the best dining places in Salt Lake City, that I was disappointed with the presentation of the food at Mazza. And, like I said, I thought the fried items we had were too dark — almost as though they had been cooked in “old” fryer oil. This may not be the case — and, again, it may be that these fried foods are truly like this in the Lebanese tradition, but I would have liked them to be more golden in color and cooked less time in the oil.

Also, the art of plating is so important now. The lamb, although perfectly prepared, was not plated in an appetizing manner. It just looked like a large plate of brown rice and shredded lamb with little or no art shown in how it went together. The Lamb Dolaa costs $18, so I really think Mazza could step it up a notch with the presentation.

As a chef, I really want Ali to know that I liked the cuisine and this dining experience, but I wish the dishes I’ve mentioned could be more artfully presented and that some of the flavors could be updated with some fresh ideas. I’m not saying Mazza needs to go more “Western,” but I would be happier if some of the dishes were fresher, brighter, crisper and more beautiful to look at.

In looking at the menu, I realize that there are many, many dishes I would like to try at Mazza, so I hope to do a re-visit in the next few months.