The road to Oakdale is fraught with danger and excitement.

The world has turned 30 times since my last column appeared here in QSaltLake, and my soul is left with a gaping chasm of longing, homesickness and nostalgia. After more than half a century, As the World Turns aired its last episode during this last month, and now I’m able to give my television remote a much-needed rest. 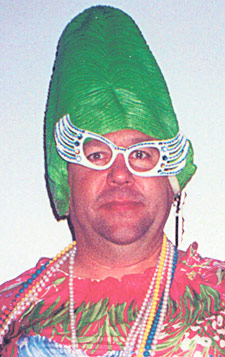 I am a television addict of the highest order. It all began when I was just a little princess and my mother would place me in front of the TV while she cleaned the house. I would sit there for hours without fussing. Having been raised in the potato fields of Idaho, it was only natural that I had grown up to be a couch potato extraordinaire.

Our first TV was an ancient black and white set that, if left on for more than two hours at a time, it would overheat and blank out. Often at the worst times imaginable. On Friday nights during Nightmare Theater, just when Godzilla would be beating the crap out of Mothra and stomping on Tokyo, the TV would go off. It seems like I was an adult before I saw a Godzilla movie from beginning to end.

When I was a teenager, we had bought a new, more modern TV. It was still a black and white set and did not have a remote, but it had a nifty push-button channel changer, so I could lay on the floor in front of it and change channels with my big toe. That technological advancement just left me as giddy as a school girl. Of course, there were only three channels to choose from.

I would race home from school each afternoon to watch Dark Shadows and see what the vampire Barnabas Collins was up to. In hindsight, you could clearly tell I was going to grow up to be a queen by the shows I enjoyed. I was totally mesmerized watching Julia Child pounding the dickens out of a chicken; likewise, I was fascinated by watching Joann Castle play the honky-tonk piano on The Lawrence Welk Show. And for the pièce de résistance, I begged to stay up past my bedtime every Saturday night until after the June Taylor dancers had performed on The Jackie Gleason Show. I loved when they would do a camera shot from above while all the dancers would lie on the floor and make kaleidoscopic designs.

Of course, I had my childhood TV crushes. Major West on Lost In Space just gave me the vapors. Not to mention, Robin in those tight tights on Batman. And we won’t even mention the Man from Atlantis! He was the stuff wet dreams are made of and the reason I took swimming lessons.

As a princess-in-training, I was totally devoted to I Dream of Jeannie, Bewitched and The Flying Nun. I’m sure I developed my keen fashion sense from Endora’s fabulousness, or was it all those over-the-top Bob Mackie costumes on The Carol Burnett Show? I still covet the curtain rod dress Carol wore in “Went With The Wind.” And the very first time I attempted any kind of drag was when I tried to fly by constructing a Flying Nun’s habit out of cardboard, strapping it to my head during a stiff wind and jumping off the swing set in the back yard. I crashed to the ground in a most unladylike heap, spraining my ankle. I’m just lucky I didn’t break a nail. That truly would have been a great tragedy.

I was the first one in my circle of friends to buy a VCR when they came on the market in the late 1970s. It was one of those huge old top-loading things that I purchased “used” from a video rental store for $350. It weighed a ton — even more than my makeup kit — and did not even have a remote control. Nevertheless, in order for me to be able to record “Who shot J.R.?” and watch Krystle Carrington and Alexis Colby have a catfight, any price was worth it. The advent of the DVR has made my addiction much more manageable. It is indeed the best invention since the Twinkie and more valuable than even glitter!

I have made a hobby of trying to record most shows that include a gay story line or character. In order to accomplish this, it has become necessary to watch TV armed like Marshal Matt Dillon from Gunsmoke, with a weapon/remote in each hand ready to fire. I’ve had to become very quick on the draw of the pause button, in order to cut out the commercials. This is most challenging during soap operas because of the rapid change between story lines in each episode.

After recording and editing the gay story line on As the World Turns for more than five years, I have amassed 64 hours of following the travails and adventures of Luke and Noah. I’m sure all that editing is the reason I have carpel tunnel syndrome.

1. Is the gripping of remotes the cause of carpel tunnel syndrome?
2. If I wiggle my nose like Samantha Stevens, will Gayle Ruzicka disappear?
3. If I had added glitter to my nun’s hat would it have flown?
4. Are Batman-style capes in vogue this season for the fashionable queen?
5. Do the Emmy awards have a category for Outstanding Couch Potato?

These and other important questions to be answered in future chapters of: “The Perils of Petunia Pap-Smear.”

A tale of water buffalo

The tale of pride and service