After a failed bid for the state’s attorney general’s office in 2008, Libertarian Andrew McCullough thought that his days in politics were over.

And then he learned that his party needed to put a candidate in a statewide election if they wanted to stay on the ballot. As the party chairperson, McCullough accepted the responsibility.

“I didn’t want to run for Governor but my party called,” he said.

McCullough, a Utah County attorney whose clients have included members of the adult entertainment industry, is a member of one of the country’s fastest growing political parties — and one of the state’s most colorful; its candidates have, at various times, included professional hypnotists, outspoken fans of marijuana and Dell “Superdell” Schanze, the former owner of Totally Awesome Computers (who made a failed bid in 2008 as the Libertarian candidate for governor, and who ran as a Republican this year).  It is also a party that overwhelmingly accepts gay, lesbian, bisexual and transgender rights; for example, Utah Libertarians include Willy Marshall, the openly gay former mayor of the Southern Utah town of Big Water.

“We have plenty of gay libertarians, but the beauty of our party is they don’t need a separate organization,” said McCullough, saying that both major parties do have gay, lesbian, bisexual and transgender caucuses and that neither does a particularly good job of supporting gay and transgender rights. “If you’re a Log Cabin Republican [a member of the Republican Party’s gay-friendly caucus], you’re trying to fight, in my opinion, a losing battle to get your party to acknowledge and recognize you. Gay Libertarians don’t have to ask. They’re part of the party. We don’t discriminate against them.”

Libertarianism has gained popularity since 2008 as its platform of what McCullough describes as fiscal conservatism, “lower taxes, smaller government and more freedom” was embraced by members of the Tea Party movement. However, McCullough said the two shouldn’t be confused, even if they share certain beliefs.

“[The Tea Party] started as a tax protest,” he said. “Unfortunately, it got taken over by religious rightists who have turned it into an anti-immigrant, tow the mark, the Bible is our watchword group. We kind of see ourselves as the Tea Party minus the intolerance.”

While some Libertarians focus mainly on issues of taxation and government downsizing — and some, said McCullough, hold to a political philosophy that is close to anarchism — McCullough said he is a more “liberal” Libertarian when it comes to issues like public schools and roads. For example, while he supports publicly funded education, he thinks that people with more children should pay more education taxes than should people with smaller families or who do not have children. But while he is against having government invest in such projects as museums (as Proposition 1 seeks to do this year), he does not oppose public transportation.

“I’m not going to say I’m going to whack the government back into the 18th century, but I am going to nip and cut at taxes,” he said.
A huge cut that McCullough said he’d make if he is elected is against the so-called War on Drugs — a war he says that the government has not only lost, but which has lead to overcrowding in prisons, and therefore unnecessary expenditures on law enforcement.

“Sixty percent of prisoners are there on drug offenses. It needs to stop,” he said.

However, McCullough admitted that he is more interested in Libertarianism’s social policies, and in particular how those social policies can help Utah’s gay, lesbian, bisexual and transgender citizens.

“I do have a veto. And there are certain things I can do to wield a veto,” he said, including that he would veto any attempts by the Legislature to slap down county and city ordinances protecting gay, lesbian, bisexual and transgender people from employment and housing discrimination.

“I think the Governor can have a great deal of input into that,” he said. He is the head of state and he can say, ‘This anti-gay business should stop.’ Right now, if I knocked on Sen. [Chris] Buttars’ door [a Utah Senator who has voiced anti-gay opinions in the past] and said, ‘Cut this out,’ he’d say, ‘Go to hell.’ But if I was the Governor and had that bully pulpit, he’d have to listen respectfully, wouldn’t he?”

Although McCullough does not expect to be sworn in as Utah’s first Libertarian Governor in 2011, he does hope that his campaign gets more gay, lesbian, bisexual and transgender Utahns — and the groups who fight for their rights — to consider what his party has to offer.

“I get frustrated that Equality Utah’s political action committee is firmly arm-in-arm with the Democratic Party,” he said. “They say, ‘We’re just looking for winners.’ Well they’ve got to know they’re looking in the wrong place for winners. They can huff and puff about [Democratic gubernatorial candidate Peter Corroon] who hasn’t got a chance of a snowball in the hot place, so why not support people who are really with you?”

“The Libertarian Party is growing,” he continued. “Sure, we’re third right now, but second isn’t much of an improvement. We think our message is more pure and certainly if you are a member of the LGBT community and a fiscal conservative, which is not impossible, there’s really no where else to go but us.” 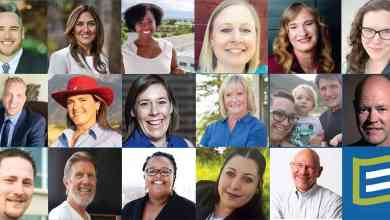 The Equality March for Unity and Pride – Utah 2017