A couple of weeks ago, I was invited to the Tin Angel just one day after returning to Zion from the Cote d’Azur in France. Talk about a culture shock and jetlag to boot! Nevertheless, my dining partner Brad di Iorio and I had an excellent dining experience and it was such a treat to be served by the chef, Jerry Leidtke. 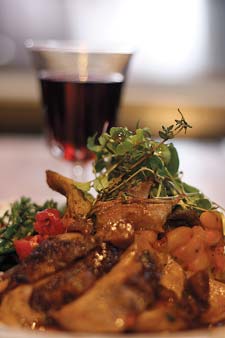 Jerry told us about his father who recently passed away and how, many years ago in the early days of bars and saloons in Salt Lake City, the senior Leidtke had a hole-in-the-wall place called the Tin Angel. This was an establishment where casual folk and people who wanted a drink in a social setting could go and be themselves. I’m sure that imbibing spot was fun, interesting, and quirky! The restaurant that goes by the same name on 400 South today follows in the footsteps of this old idea. And while I think I would have liked the old place, I KNOW I like the new one.

Tin Angel is located across from Pioneer Park to the south. You enter from an old, but clean ally that speaks of Salt Lake’s past. The building is a 1900 wooden-shake house adorned with folk art and fantasy. This may not completely prepare you for a fine culinary experience, but it does prepare you for the charm, relaxed atmosphere and lovingly presented food.

The chef explained to us that the mission of Tin Angel is to make really good food out of local and fresh ingredients and to use classical cuisine as a basis for everything they do. I believe him and this is what we ate.

Both times I have been to Tin Angel, I have been served delicious French bread that has been broken by hand into large chunks and then toasted in a hot oven. I find this so delightful and tasty. The bread comes on a platter with butter, sliced pears and hot almonds that have been sautéed. (By the way, the first time I went to Tin Angel I had a butternut squash soup swirled with some vibrant local cream; I loved it and have made it on my own several times since.)

Next we were served a series of “bites.” Having just returned from my trip to France, I was amazed at how similar these appetizers were to so many things I had eaten abroad and how fun it is to taste small “bites” with wine. The waiters at Tin Angel tell you about the wines they chose for their fare and guide you through a nice experience. We had a glass of white wine to go with our tiny shrimp salad on one small plate, blue marlin sashimi serve on a plate shaped like a fish — which I just loved — and a cube on Tenderloin that was laced with an espresso glaze. With the darker meats we tasted Peter Grisley’s Mirado Iberico — a very nice little Spanish wine — and then a heavier and very smoky WolfTrap from South Africa. The pairings were great and for the first time in Salt Lake, I really felt like I had found a place where food and wine are married in a proper ceremony! The tenderloin, although small, was tender, juicy and perfectly cooked. I could tell great care had been taken in choosing this meat which, in my mind, is not as easy to find as it was back in the day.

What I enjoyed about our experience was how easy it was to sit across from a chef and truly be walked through his creative process. Chefs are artists, and you can really tell when cuisine is driven by a good chef in the kitchen. It’s hard work, I can attest to that, but it’s also an artistic endeavor. That is what I like to see and feel when I’m dining out.

Brad, who has Italian heritage, was very happy to enjoy gnocchi for the first time. The tiny potato dumplings, an Italian delicacy, were tender and drizzled with an excellent cream sauce flavored with gorgonzola cheese. They practically melted in our mouths. This hard to do, but very yummy!

We were also recipients of a very flavorful roasted beet salad. The beets were still a little crunchy, which I find to be the case when you cook them in the oven and opposed to in a pot on the stove. I can always tell when fresh beets are used and I was not disappointed this time. Being old fashioned, though, I love the pickling flavors in beets my mother and grandmother used. Angel’s beet salad, although nicely done, lacked a bit of “twang.”

Our favorite dish was still to come. Jerry had made a plate called “Duck-on-duck.” He said it was a “confit,” which means “cooked in its own juices.” The confit, pronounced “cohnfee,” was a mound of tender and soft braised duck, served on a bed of beans a la Cassoulet, then topped with a freshly grilled duck breast drizzled with a pomegranate reduction. Brad and I both thought the flavors were excellent and the plate was garnished with beautiful broccoli spears which brightened up all the dark flavors. You might say that this seems like too many things going on, and I’m usually one to point that out, but here it worked. Every item came from a classical idea, just put into a new conception.

By this time jet lag had set in, and I wasn’t sure where I was, so I’ll have to cover the delicious desserts another time. We also, I think, had some house-made chocolates which I was very interested in because I have a line of chocolates I’m working on.

When I’m invited to a restaurant, it’s difficult to do a rating, because when a chef sits in front of you, impresses you, and really pulls everything off, it’s different from just walking in and taking your chances. But I have been to Tin Angel twice now, both announced and un-announced, and I have to say, they know what they’re doing. I give Jerry and his staff a 91 rating for a great salute to the past in a new and lively setting. For me, the “Tin” Angel has the golden touch! 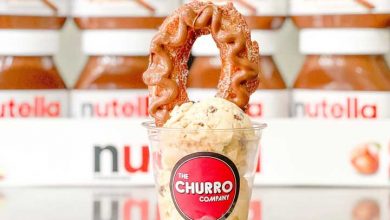