Happy Halloween, muffins! Or, as I like to think of it, “Happy down low Gay Pride Parade for straight folks.” Seriously kittens, how many straight men do you know who can’t wait to squeeze themselves into a dress for Halloween?  Sure, they may shred it up a bit and be a zombie or the Bride of Frankenstein or something, but underneath it all, petals, they’re still in drag, and that silky slip with the spaghetti straps feels good! 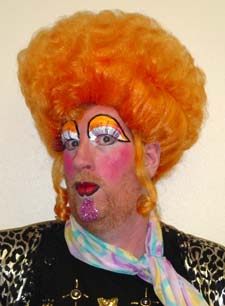 I remember making the rounds of a few bars and Halloween parties a while back, where so many young, svelte little twinks were dressed up in camp drag like us. If imitation is the sincerest form of flattery then I should have been honored, but pumpkins, it was appalling. Despite the gaudy neon wigs and clashing animal prints that make us look like Macy’s Thanksgiving Day Parade balloons, these anorexic little bastards looked more couture than camp. You could wedge three of them into one of our bras and still have room for a snack. It was totally depressing.

My only consolation was that one day gravity, entropy, age and diet would inevitably turn these perky little stick figures into middle-aged men with nose hair issues.

It’s been really interesting, because there are so many gay and lesbian-related stories right now that even the Deseret News can’t ignore them anymore. The rash of bullying suicides; the latest Boyd K. Packer debacle; The Don’t ask, Don’t Tell novella; the bizarre anti-gay rants of the Tea Party candidates; and Neil Patrick Harris birthin’ babies is all too much for the D News comment trolls, and they are coming off the rails.

Mercifully KSL euthanized its comments section, so the trolls, now denied their usual venue, are either swamping The Salt Lake Tribune boards with invective bile, or adopting this fake pious “church-speak” to couch exactly the same points on the Deseret News’ boards. Predictably with its new mandate for LDS Church-affirming celestial fluffiness, the D News censor is having a field day swatting down most of the pro-gay/equality posts (although suspiciously, some of the most prolific, worst-written, pro-gay, straw man arguments seem to be allowed, which inevitably end up being squashed and discredited. Hmmm…coinkydink?  I don’t think so.

I tried to get a cogent post on the Deseret News boards a few weeks back. It was short and salient, and despite coming from me it was remarkably free of snark. Naturally, it didn’t make it. I mentioned that the resistance to the D News article from the gay community was about the “You can and you will change” theme of Packer’s Conference talk, not about his or the LDS Church’s views on marriage (which everybody knows already).

I vented to a few of my more liberal and politically active LDS friends, and they had the exact same experience during the Boyd K. Packer “gays can change” debacle. If their post didn’t have something to do with marriage then it was purged. I could see that happening once or twice by accident, but the tin foil hat-wearing bunker dweller in me wasn’t convinced. So I looked at other gay and lesbian stories on the D News site, and lo and behold, it sure seems like someone, somewhere, at the D News wants everything gay-related spun about “the sanctity of marriage” and nothing else.

Test my hypothesis for yourselves, cherubs. Read any gay-related article and its comments on the D News website, no matter what the topic, and see how quickly the comments spin into focus group-tested talking points about the defense of traditional marriage. That kind of frequency can’t be coincidental! I really hope this censorship and coordinated message spinning from the new Mormon media isn’t the shape of Salt Lake “journalism” to come.

Resolution for the year: pay attention!