Utahns paying careful attention to the race for Utah’s 3rd Congressional District may have noticed that the candidates include Republican incumbent Rep. Jason Chaffetz, Democratic challenger Karen Hyer and a third person who was not present at the debates: a man who goes by the name Professor XS, or “the world’s most dangerous hypnotist.”

Off of Utah’s stages, Professor XS is more commonly known as Jake Shannon, the vice chairperson of the state’s Libertarian Party. Like many of Utah’s Libertarians, Shannon hopes that his colorful image will help him and his party get more recognition among the state’s voters.

“Libertarians tend to be very logical thinkers, that’s why there’s a lot of nerds, computer programmers and attorneys in the party,” said Shannon, who as a hypnotherapist, stage hypnotist, financial analyst and self-defense expert — admits to being a bit of a nerd himself. “But the problem is, those are the same guys that used to go play Dungeons & Dragons and don’t have any social ability whatsoever. I think it’s important to put a face on the party that is responsible but approachable and real, a face that someone might want to have a beer or a coffee with.”

Shannon, who moved to Utah in 2007, said that he learned to appreciate the party’s stance on lower taxes, limited government and social liberalism as an employee of Laissez Faire Books, San Francisco’s “biggest Libertarian direct mail book source before Amazon killed everybody.”

“Back then I had to make the case in San Francisco that the Libertarian perspective is going to be the one that actually protects gay rights,” he said. “It’s not that we care about gay rights per se, or women’s rights or African-Americans’ rights, but we care about individual rights. As long as you’re an individual, you should have rights, and that right does include the right to contract.”

Because Libertarians believe that forming contracts is “a basic human right,” Shannon said that he supports same-sex marriage. As proponents of small government, he added, Libertarians also typically support such things as ending the country’s war on drugs, and cutting taxes. And while some Libertarians, such as Utah gubernatorial candidate Andrew McCullough, prefer the party because of its liberal social policies, Shannon said he is a Libertarian because of the “unemotional” way the party looks at taxation and spending.

In a Libertarian utopia, said Shannon, government would be smaller and more efficient, not non-existent as some Libertarian critics suggest. The redistribution of power would also not be to corporations (which Shannon opposes), but to individuals, which he describes as the basic unit of society.

“If you look at the amount of money that goes to the IRS, that’s a gigantic chunk of your paycheck, and it goes to stuff you may not support like military bases like Guantanamo Bay,” he said. If progressive income tax and the IRS was downsized or done away with completely, he added, “That would take us back to the size of government we had under [President Bill] Clinton in 1997, when it was still huge and that’s just getting rid of the IRS.”

This also holds true for welfare programs, Shannon said, noting that overspending on bureaucracy has made these programs fail to help end poverty, and that cutting them back would make them more efficient.

“In the 1960s, 80 percent of [welfare] revenues went to people who needed help,” he said. “In only 20 years that ratio has flipped; only 20 percent of those funds go to people and 80 percent go to bureaucracy.”

“We do believe in markets and they’re always going to exist — for example black markets and prostitution, and this is where we get a bad rap,” he continued. “But what people don’t realize is that for every service that the government provides there’s no competition. That creates a monopoly so you get horrible service. You get horrible Department of Motor Vehicles-quality service in everything government does.”

While Shannon said he has “no illusion I’m going to win,” he said that he was inspired to run by Libertarian Ron Paul’s 2008 Presidential campaign.

“He didn’t win clearly, but by simply running and discussing his platform and getting into the press, he was able to shape the debate,” he said. “As a matter of fact, once he was done the Republican Party fractured. In my mind he single-handedly destroyed the Republican party, and it took them two years to regroup.”

Shannon encouraged Utahns across the political spectrum who are tired of both mainstream political parties — queer Utahns in particular — to check out his party and his campaign.

“I would hope that people in the lesbian, gay, bisexual and transgender movement really take the time to look into the Libertarian Party and to challenge themselves to think about not the emotions involved, but what has the Democratic Party done for you lately, and would you be better served under the banner of Libertarianism?” He said.

Karen Hyer’s campaign did not respond to QSaltLake’s interview request.

Most commented Q stories of 2012 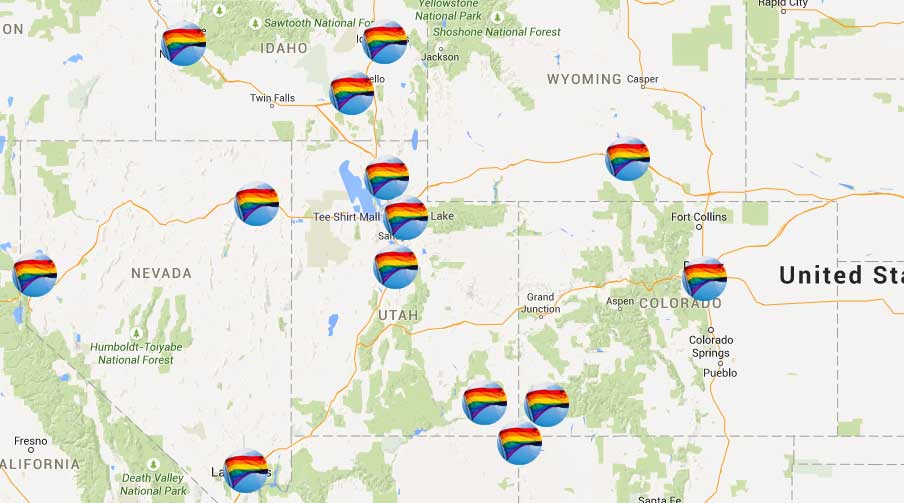