When Brian Beckstead was just 14, he was sexually assaulted by another man. Like other male survivors of rape and sexual abuse ( gay and bisexual male survivors in particular), he said the experience played havoc on his sexuality as he matured.

“As time wore on and I started thinking about it, I thought, ‘Did I entice him? Did I turn him on?’” he said.

It also played havoc on his life in general. For 27 years, Beckstead said he didn’t seek help and coped with the pain through “alcohol addiction and sex addiction, and fighting in clubs and almost getting arrested.”

“At 41 I was going to commit suicide, I had planned it all out,” he said. But instead of going through with his plan, he said he called the Utah Pride Center. Within hours he had an appointment with a counselor at the Rape Recovery Center.

That was three years ago. Since then, Beckstead has helped found the Rape Recovery Center’s male survivor group and has joined MaleSurvivor, a group dedicated to helping male survivors of rape, incest and sexual assault, and in which local therapists Jim Struve and Lee Beckstead (no relation) also work. Although far more women and girls are victims of sexual violence, the National Institute of Justice & Centers for Disease Control & Prevention found in 2003 that one in 33 men have experienced an attempted or completed rape, and that 2.78 million men in the United States are survivors of sexual violence. In 2003, males also constituted one of every 10 rape survivors.

This month, Beckstead is taking his quest to raise awareness of male survivors to the national airwaves. Also, Beckstead was one of 200 male survivors of sexual violence who appeared alongside actor, director, writer and Madea creator Tyler Perry on a special two-part episode of Oprah.

The genesis for the episodes, said Beckstead, came when Perry discussed his own history as a survivor of sexual abuse on Oprah Winfrey’s show.

“He said, ‘Why don’t you do a show about male survivors?’” said Beckstead.

After that show, Beckstead said that Winfrey’s producers contacted MaleSurvivor. Out of the thousands of applicants who wanted to share their stories, the producers selected Beckstead and 199 other men and flew them to Chicago for the taping. These men make up the entirety of the audience for the show.

Of these men, eight, including Beckstead, appeared on segments that segue into Winfrey talking to her guests. In his segment, he said, he talks about his plan to commit suicide “and about how 80 percent of people who are molested consider suicide.”

The topic was so important and had so many aspects, said Beckstead, that Winfrey ultimately decided to spread it over two shows.

“She had no idea, I think, what she was getting into,” he said. “She said that [these are] two of the most powerful shows she’s done in 25 years. I think she’s really interested [in pursuing this topic.]”

Before the taping, Beckstead and the rest of the audience sent producers pictures of themselves at or around the age at which they were molested. Of these, producers selected Beckstead’s picture and several others to enlarge to poster size and place on the wall behind Winfrey’s stage. They also asked the men, he added, to hold the large pictures in front of themselves as the camera panned the audience.

“Oprah came in and looked around and the tears just rolled down her cheeks,” he said. “It was the most incredible experience. She said, ‘This has nothing to do with you as men, this is about the innocence lost in all those faces.’”

Following the taping, Beckstead said that Winfrey challenged them to “go back home and let our media know what’s going on.”

“I want some wife or sister or brother to walk past the TV and hear Oprah talking about this issue,” he said. “I hope someone looks at the TV and goes, ‘Oh my God, this happened to me or my brother or dad,” and they know that resources are available. If it’s just one person [who gets helped by the show], that’s one more person that’s not going to suffer.”

Three years after his near-suicide attempt, Beckstead said that helping young gay male survivors not reach that point is his passion.

“Three years ago I was going to shoot myself, and three years later I’m mentoring youth,” he said. “I’ve got my own business going. I have my first novel coming out. I would have missed out on so much of my life because of the selfishness of some prick.”

Anyone, regardless of sexual orientation, gender identity or physical size and strength can experience sexual violence. If you are a survivor of sexual violence, the following resources can help:

The first part of the Oprah special aired Nov. 5. The second part will air Nov. 12 at 4 p.m. on KUTV Channel 2. For more information about the episodes, including a lengthy article about the first segment, visit oprah.com/oprah_show.html. 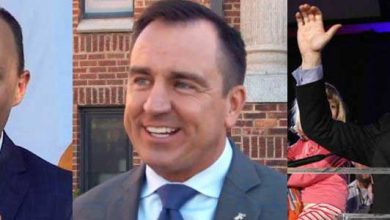