After Thanksgiving, Jennifer Nuttall will be working at a new job, seeing new people—much younger ones than she’s used to seeing as the Utah Pride Center’s adult programs director.

On Nov. 30, Nuttall, who started at the Center as a volunteer in 2002, will start work as the development director of Neighborhood House, which offers day-care services for children and adults, and has cared for her own children, Skyler and Anjelika since 2006, when Nuttall, their biological aunt, received permanent custody of them. 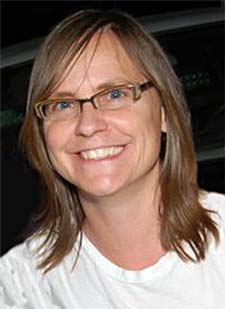 “When I got my kids four years ago, I got them quickly and abruptly and I didn’t have a lot of resources, and I was scrambling to find out what I’d do with them during the day because  they weren’t school age yet,” she said. On the recommendation of a neighbor, Nuttall enrolled her son, who, having faced neglect before coming to Nuttall, was not ready to begin school.

“They got him with a wonderful teacher and got him kindergarten-prepped that year,” she said.

Impressed both by the day care’s tutors and its sliding-scale fee, Nuttall kept her son there and enrolled her daughter when she reached school age. But although she loved Neighborhood House, she said that she initially balked at the idea of applying when the position of development director opened up and staff encouraged her to apply.

“I’m a programming person,” she said. “But the more I thought about it, the more it became an interesting idea because my office would be there for my kids after school and all day during the summer. Everything just started falling into place, and I feel it’s the right move for me to make in my life at this point. [This job] brings my priority of being a mom and my passion for nonprofit work together in one position.”

Eight years ago, the position of adult programs director did not exist at the Utah Pride Center. But there, as at Neighborhood House, Nuttall moved into the place where the community needed her. In 2002, then-Executive Director Paula Wolfe asked Nuttall, then a volunteer, to assist with grant management. One year later, the Center leveraged money from its anti-tobacco grant into creating the full time position that Nuttall would hold until this year. During this time, the Utah Pride Center would drastically increase the number of programming options for adults to the diverse track it offers today.

“The position did not exist before I was hired, and so I was fortunate to have the opportunity to build that programming from the bottom up,” she said. “This position has truly been my dream job, and has afforded me unparalleled opportunities for growth, both personal and professional, community engagement and hands on knowledge on so many fronts.”

For Center regulars worried about how her departure will affect the programming she and they have worked so hard to put in place, Nuttall said that services will not be interrupted.

“There’s always so much to do here, so I’m a little afraid for the staff!” she joked. “But we have a plan for the interim time when someone’s not in the position.” This plan, she said, will include parceling out the responsibilities of running the programming track among the staff.

“[Executive Director] Valerie [Larabee] is on top of making sure those gaps are filled so no one has to worry about programs and services being provided for the community,” she said. “Those will stay in place thanks to the fabulous staff and volunteers we have.”

Further, she added, the Center will also be looking to fill a volunteer programming intern position—and to restructure the adult programs director position after her departure.

“Valerie is going to be looking at how she wants the re-organization to look and the position as more than one position in the near future,” she said. “So if people in the community are interested [in applying], they could keep an eye on our website.”

In some ways, however, Nuttall said that her new job will be like her old one. As Neighborhood House’s development director, she will once again be writing and managing grants. However, she will also attend to fundraising for the day care’s programs and developing its donor base.

Another thing that will not change, she added, is her commitment to Utah’s lesbian, gay, bisexual, transgender and queer community.

“I want to give a huge thank you to everyone in the community for supporting me, and for their friendship and for the community work we did together,” she said. “I’m proud of our community and excited for everything that’s still to come.”

How Salt Lake City, of all places, built America’s most impressive Pride celebration