The Royal Court of the Golden Spike Empire’s biggest and glitziest annual drag show is coming just in time for the holidays, and appearing on the stage of Studio 27 in all the smokey, snarly glamor of 1920’s cabaret. 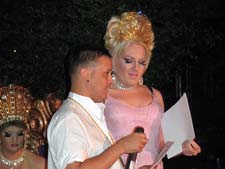 “It’s a more elegant evening compared to our normal events,” said Jesse Henninger, aka Princess Royale XXXV Jessica Debonair Christie, who is hosting the ball along with fellow royal Prince Royale XXXV Dega Giovanni Christie. “We go to great lengths to prepare for this event,” which includes dinner, an open bar, auctions, door prizes and a drag show featuring  local performers who include past princes and princesses, members of the Imperial Rainbow Court of Northern Utah, and community members who are not part of the court.

“What we’re going for is really a quality show, not your average drag show,’ Henninger continued. “They’ve put extra time into the set and everything like that to make it as glitzy as possible.”

The glitz is not only for fun, but for a good cause. Proceeds from the ball go to the charitable drag group’s annual People with AIDS Christmas Fund. When the ball has ended, the court’s prince and princess divide the proceeds from Snow Ball into $100 checks for as many Utahns living with HIV/AIDS as they can.

In order to stretch the dollars, the prince and princess begin soliciting donations of money and supplies months in advance. It’s an exhausting process, said Henninger, and one he could not accomplish without the prince.

“I think the two of us were meant to work together,” he said. “He’s adorable and I couldn’t do any of this without him.”

Including, of course, the fabulous décor for the evening. While reluctant to give too much of the set away, Henninger did say that the evening’s colors would be blue, silver and white “with a lot of Christmas trees present.”

“The Studio 27 décor is red and gold, so I thought blue and white and silver would offset that nicely,” he said.

Confirmed performers for the evening so far include Systeen Chapelle and former empresses Sheneka Christie, Paris Silver, Clariss Cartier and Yvette Malloy. But don’t expect to see all of them strutting like Lotte Lenya or Liza Minelli. Popular karaoke DJ Kade Steel will also be on hand to sing.

“As far as performances are concerned, [the cabaret theme] is going to be open to interpretation,” said Henninger. “But the music between performances and at the beginning will have a mostly ’20s and ’30s smokey, speakeasy cabaret feel. Fringes and beads and feathers and all that.”

Snow Ball 2010: A Cabaret Christmas will be held Dec. 18 at Studio 27, 602 W. 100 South, beginning at 6 p.m. Tickets are $20 in advance or at the door and can be purchased at the club during business hours or by e-mailing [email protected] or [email protected] For more information about the Royal Court of the Golden Spike Empire, visit rcgse.org.