Happy New Year kittens! As Senior Drag Matriarch and loving Den Mother to you all, my first official act of the year is to hereby decree that 2011 shall hereafter be known as the “Year of Reality and the Possible.” And here’s why. … After all of the election year bullshit that was 2010 (dishonest ads, scare mongering, and the living nightmare that was Sarah Palin with a Twitter account), it is imperative that this year be based in facts, pragmatism and the real world. Sadly cherubs, given the slate of new ideological conservatives filling legislatures and offices nationwide, I think keeping our politicians and community leaders grounded is going to be a full time job for all of us. So we really need to pay attention. 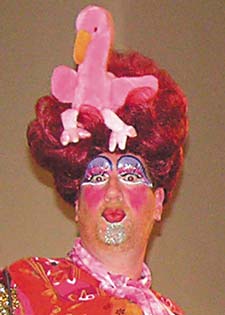 Just this morning (the first business day after the New Year’s break), I read four separate articles about how Representative Chaffetz and Senator Lee were going after the Obama administration. Not about what they wanted to build, accomplish, or collaborate on in government for the benefit of the American people, just what they wanted to tear down and their plans for revenge. Then there were all of the articles about their Republican colleagues who plan on opening up all sorts of investigations and budget hearings to scuttle last year’s health care reform and discredit the president before the state of the union speech. Nothing about immigration reform, the costs of the Afghanistan War, or the crippling levels of unemployment and financial insecurity. Nope it was all about hammering the president’s popularity in preparation for a Republican run at the White House in 2012. Really? Is that the Republicans idea of “Country First?”

I still need someone to talk me down off the ledge after Orrin Hatch blamed the Democrats (mainly the President) for not passing immigration reform last year. Seriously Orrin? And how many decades have you been in the Senate? How many administrations both Republican and Democrat have come and gone, while you sat on your hands doing nothing about immigration? But after Senator Bennett gets bumped off by extreme right wingers, you suddenly get indignant about Mexicans? How conveeeeenient!

Now petals, I know I am a big time nerdy policy wonk who gets totally revved by local, federal and international politics, but darlings you really need to get excited about this stuff too. OK, I’m not going to force you to be excited about all of it, but at least be aware of the issues that impact us and our allies.

Might I suggest that your first object of interest be the Utah State Legislature who are fast tracking some type of immigration message bill this session. At this point we don’t know what it’s going to look like, but petals we need to be vigilant that it doesn’t devolve into some hateful law that simply targets a powerless minority just to keep the ultra-conservative ideological fringe happy, while doing nothing practical to solve the problem.

We should never forget that the LGBT community in Utah was that targeted and powerless minority for decades, and we should never forget how dehumanizing it was, and how bleak and hopeless it sometimes felt. So when it comes to any issues of equality and fairness, like race, orientation, poverty, or whatever, we of all people should be the first ones in there standing beside those minorities and standing up for what’s right and what’s possible.

OK, I shall now descend gracefully and regally from my soap box and put a burrito in the microwave, because all of this conviction and optimism has given me the munchies. Ciao, babies!
You can see Ruby Ridge and the Matrons of Mayhem in all of their polyester glory at Third Friday Bingo (every Third Friday of the month at 7pm) at First Baptist Church (777 South 1300 East).