Every year, the messy milieu of Utah culture and politics presents us with several heroes and villains who challenge the state’s lesbian, gay, bisexual, transgender and queer community to be strong, cohesive and vocal about their rights. Rarely, however,  has QSaltLake seen such a dynamic year as 2010, and never have there been so many possibilities to choose from when naming ‘Person of the Year.’ So, after receiving dozens of suggestions and scores of Facebook comments on Q‘s nomination post, it became necessary to also name several honorable mentions and other persons of notability.

First, QSaltLake‘s Person of the Year. The lesbian, gay, bisexual, transgender community’s most significant victory of 2010, the passage of 10 local ordinances forbidding housing and employment discrimination based on sexual orientation or gender identity, was not only the work of one person, but of many people from Equality Utah’s dedicated staff and volunteers, to hundreds of residents who attended council meetings on the ordinances. Yet, the face and much of the drive behind them was Equality Utah Executive Director Brandie Balken. 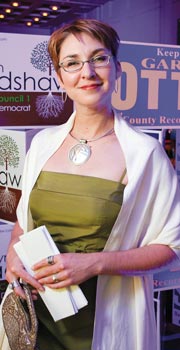 When Balken learned that she was going to be named Person of the Year, she said that she was elated — but surprised. Nonetheless, in her first year helming the state’s largest gay and transgender rights organization, Balken not only helped many Utah communities begin difficult discussions about sexual orientation and gender identity, she was also instrumental in getting many of those communities to turn discussions into action. Just days before Christmas, Balken and Equality Utah saw their dream for 2010 become a reality: the passage of 10 ordinances protecting lesbian, gay, bisexual and transgender Utahns from job and housing discrimination. According to estimates published in The Salt Lake Tribune, these ordinances protect a fourth of the state’s population.

“I think it was a huge undertaking to do this kind of groundwork,” said Balken, a former Interiorscape Specialist with Cactus & Tropicals, and who penned a gardening column for this newspaper in 2006. “We found ourselves out among the state more than we’d ever been, and it was some of the most rewarding work we’ve ever done. Sometimes it’s easy to get disenfranchised working with the [Utah State] Legislature, but working on a local level with councils and mayors [to pass protective legislation] gives people more direct access to politicians, and their voices do make a difference. ”

Balken was quick to add that she alone could not have made such a difference for so many Utahns; rather, she said that Equality Utah’s staff and volunteers were instrumental in getting city and county governments to consider such protections. Staff, she said, worked together in holding town hall meetings and talking about the ordinances with fair-minded members of city governments, and EU board members frequently took time out of vacations in Southern Utah to discuss workplace and housing equality with councilmembers in Moab.

Stephanie Pappas, outgoing president of Equality Utah’s board of directors, praised Balken’s leadership and said that the relatively new director would take the organization in an inspired new direction.

“I am excited to see what Equality Utah can accomplish now that Brandie is really getting her stride,” she said.

Balken also commended residents in cities from Moab to Logan who often took the initiative to see these ordinances put in place.

“You don’t have to look any further than Ogden to see the incredible difference that residents have made,” she said. “Not only has it been an immense amount of work, it has also been incredibly satisfying to see residents get involved in a meaningful and impacting way.”

Had only nine, or seven, or just three municipalities agreed to protect all citizens from discrimination, Balken said that the goal of bringing 10 communities on board was never about the number itself.

“Even if Grand County [the 1oth to pass the ordinances] wouldn’t have passed them it would have been a win,” she said. “It was less about the numbers and more about, for me, would we have the conversations and do the work we had set out to do.” 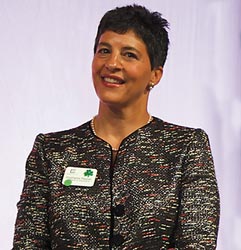 Often, board members are the unsung heroes of any organization. They put in long and unpaid hours doing everything from organizing fundraisers to soliciting donations. Sometimes, they even take time out of their vacations to convince a mayor that his or her city should protect lesbian, gay, bisexual and transgender residents from discrimination. Such was the case with some members of Equality Utah’s board, which has been lead for three years by the incomparable Stephanie Pappas. Under her watch, the organization has pushed for statewide housing and employment protections, adoption laws and domestic partner arrangements that would not exclude people on the basis of sexual orientation or gender identity. It also hired Brandie Balken as executive director following Mike Thompson’s departure, which Pappas said was “a stroke of genius on the Board’s part.”

“During my time as Chair, I participated in the development and launching of the Common Ground Initiative. It was wonderful to be a part of something so visionary,” said Pappas, whose tenure has now ended. “We took a very difficult situation and turned it into something positive that created hope for many people.”

The Common Ground Initiative was a package of four bills co-written by Equality Utah and sponsored by gay or gay-friendly legislators during the 2008 general session. While all failed to make it out of committee, Equality Utah structured its current municipal government strategy on the initiative’s groundwork.

“I have found that most Utahns are fair-minded and goodhearted, and it gave us an opportunity to build relationships,” Pappas continued. “It is through our relationships that we realize just how much we have in common. When people are given an opportunity, in large measure, they will move toward fairness.”

Pappas called her tenure at Equality Utah “some of the most fulfilling, inspirational and best work I have ever done,” and said that she was glad to be leaving the organization at such a good time in its 10-year history. 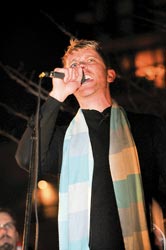 A joke by Jim Dabakis to a Salt Lake Tribune reporter appointed RadioActive producer, playwright and activist Troy Williams “the gay mayor of Salt Lake City” in early October, much to Williams’ chagrin.

“When did I run for office?” asked Williams, who writes the QSaltLake column “Queer Gnosis.”

While Williams takes a rather lighthearted view of his unofficial title, the brand of activism in which he is often involved can reach equally absurd levels. As the general legislative session wound to a close in March, Williams and several other activists lead several Utahns—including members of the press — down a political theater rabbit hole reminiscent of Sacha Baron Cohen’s Borat and Jonathan Swift’s A Modest Proposal. Under the banner of “Patriots for a Moral Utah,” Williams and several friends, including actress Tamara Johnson-Howell, staged a press conference to draw attention to a bill that sought a Nazi-like solution to the “problem” of gays in the state: forcible relocation or internment in a reparative therapy camp. Johnson-Howell played Nora Young, the group’s president who spouted lines taken from a number of anti-gay panegyrics from the extreme right.  Williams described this character, who resembled the bête noir of the beloved drag character Sister Dottie S. Dixon, as  “a composite of every hateful legislator and anti-gay organizer up on The Hill.” And while Williams doesn’t ultimately think the stunt was successful thanks in part to the press’ confusion, he nonetheless admires the radicalism behind the faux press conference.

“I don’t think the LDS Church would have ever met with Equality Utah, the Pride Center and [Milk screenwriter] Dustin Lance Black if we weren’t all out there with our kiss-ins and temple marches.  That’s all integral to the fight,” he said, referring to a kissing protest held in 2008 after LDS security kicked a gay couple out of its Main Street Plaza.

“But radicalism is more than just angry marches,” he added. “Radicalism is a worldview of systemic change.  It’s radical to stand against war.  It’s radical to dismantle patriarchy.  It’s radical to fight for fair wealth distribution to benefit the poor and working classes.  This was the spirit of the first queer radicals that comprised  the Gay Liberation Front and Queer Nation (and so many other groups).  They wanted more than just marriage and military service.  Those were the institutions of global oppression that needed to be fought.” 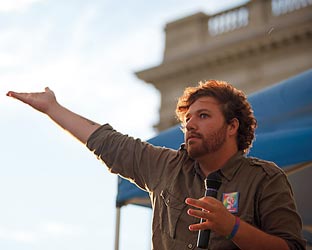 Activist Eric Ethington’s blog PRIDE in Utah has quickly become a hub not just for information on rallies and protests around the state, but an up-to-the-minute source for information on social justice issues from the latest developments in the Proposition 8 case to anti-gay discrimination in international sports. But Ethington isn’t content to confine his activism to information-gathering. After LDS Apostle Boyd K. Packer told attendees at the church’s Fall General Conference that homosexuality was “impure” and could be changed, Ethington organized a large-scale protest around Temple Square. The rally, which drew thousands, made national news and lead CNN to name Ethington as one of its most “intriguing people” for the week of Oct. 4. Not one to rest on his laurels, Ethington and several friends surprised Utah’s leading gubernatorial candidates during a debate by loudly calling for Gov. Gary Herbert to support legal protections for lesbian, gay, bisexual and transgender people. The group responsible for that protest, Justice Vanguard, is the creation of Ethington and several other Utah activists, who formed it for the purpose of publicly and vocally confronting politicians on issues pertaining not only to gay and transgender rights, but immigrant rights, anti-racism and economic justice.

A month before a wave of suicides brought about by anti-gay bullying rocked the country, Utah’s lesbian, gay, bisexual and transgender community was shaken by the suicides of three young gay men. To memorialize them and to call for an end to anti-gay bigotry and violence, a teenager named Turner Bitton called for the community to join him on Capitol Hill for a Rally for Equality. There,  speakers as diverse as PFLAG parents and QSaltLake editor and publisher Michael Aaron discussed the need for community cohesiveness and gay-straight alliances in high schools. At the same time, Bitton was also working diligently not only to help students in Northern Utah create such clubs, but to start a PFLAG chapter in Logan. Although the chapter did not get off the ground, Bitton’s tireless and outstanding efforts in helping the youngest and most vulnerable members of our community empower themselves made him an up-and-coming leader to watch.

Other up-and-coming leaders include a number of Utah students who are still in high school, and some who have just entered their freshman or sophomore year. Utah has come a long way since 1996, when the Salt Lake School Board banned all non-curricular school clubs in the district to prevent East High School from forming a gay-straight alliance. Today, GSAs are flourishing in Utah — and largely in rural areas — thanks to the efforts of students of all sexual orientations and gender identities. These brave, compassionate and thoughtful teens include: