The road to Hardware Ranch is fraught with danger and excitement.

The names in this story have been changed to protect the innocent.

Many eons ago, if my memory serves me, just at the beginning of the Paleolithic Era, my reparative therapist/torturer and my bishop encouraged me to set a new year’s resolution to go on at least one date a month “with a girl.” Yuck! But against my natural instincts, I played the part of the good little return missionary and asked my home-evening sister, Elaine, to go snowmobiling on New Year’s Day. I figured this was a totally safe date that wouldn’t really compromise my standards, and would even still be fun. 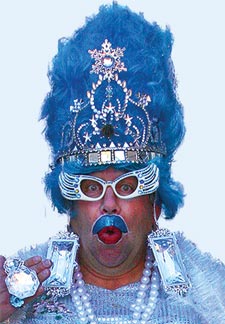 I should have seen the signs that all would not go well right at the beginning of the day, when instead of a stylish tiara and opera length driving gloves, I needed to wear a stocking hat and down-filled mittens. Oh, the shame of it all. My grand itinerary was to drive to the trail, head up Logan Canyon, ride the snowmobile over the mountain to Hardware Ranch and see the legendary elk herd.

After I was a “butch thing” and unloaded the heavy snowmobile, we paused and had some chili and hot chocolate to warm us up before the ride. There, I did give in to my instincts just a bit as I set a formal table setting complete with lace tablecloth, linen napkins, china bowls and stoneware cocoa mugs. Of course Elaine believed that I was trying so hard to impress her, when in reality I was just trying to survive the day with a little bit of style and grace. Then off we raced, me driving, and Elaine, a Southern California native unused to snow holding onto my waist for dear life.

Due to a tragic failure of planning on my part, I totally underestimated the “God given” effects of the chili beans and hot chocolate. Before long, as we relentlessly bounced up and down over the miles and miles of snow drifts, I could feel a massive build up of methane gas in my stomach, and my bladder was filling to explosive levels. Even though I knew that Elaine would not be able to hear me fart above the noise of the snowmobile, I was afraid to “let it fly” for fear of possible emissions containing more than just gas, and the oh-so-embarrassing trauma of “skid marks” on my underwear.

After a while, the laws of physics being what they are, the pressurized methane overpowered the strength of my sphincter, and with each bump, a small cloud of greenhouse gasses erupted inside my snowsuit. Before long, Elaine tapped me on the shoulder and begged me to stop. I guess that she also had held everything in as long as possible, but had reached the point of no return and had to pee. As a guy, who owns male plumbing, peeing in the woods is no big deal. We can even artfully write our names in the snow if we please. But as a woman wearing a one-piece snowsuit, Elaine practically had to get naked in subzero weather in order to do her business. Poor Elaine was so embarrassed as I watched her trudge off the trail through the waist-deep snow to find a tree for privacy. It was certainly a far cry from the beaches she was used to. Meanwhile, on the back side of a drift where Elaine would not see, I wrote my name in the snow while quietly singing:

“My penmanship is just frightful,

But the color is so delightful,

and since there’s no place to go,

(As a point of interesting trivia, by the way: I do have one lesbian friend, Kathy, who is very proud of the fact that if she uses the tailgate of her truck for a balancing platform while performing some rather limber and creative gyrations worthy of Cirque du Soleil, she can spell her name in the snow.)

After we were moving again, the day continued in a downward spiral of misery and despair. We rounded a sharp corner too quickly and Elaine became a victim of centrifugal force, losing her grip on my waist and flying off the machine headfirst into a large drift. I stopped and dug her shivering, snow-covered body out of the drift, and decided that it was not that important to see the elk. To complete the disaster, as I yanked on the pull cord to start the engine for our return trip, I inadvertently hit Elaine in the mouth with my fist, cutting her lip into a bloody pulp.

That was it. I had had enough. After sacrificing poor Elaine on the altar of reparative therapy, there would be no more hetero dating for me! In later sessions, my therapist was very impressed with the dating stories that I invented and/or stole from books.

The moral of this story is that you can date a woman some of the time, but you can fool your therapist most of the time.

1. Would Miss Manners ever deem it proper to serve chili on a date?

2. Is “yellow snow” the reason that lemon is not a popular flavor for snow cones?

3. Is being able to pee anywhere the real reason women have penis envy?

4. Where can I buy a sequined snowmobile suit?

5. How does one best remove “skid marks?”

6. How many decibels does it take to totally mask a fart?

7. Is there a way to capture the methane to power the snowmobile?

A tale of someday my prince will come

The tale of a river runs through it