Jeff Lubsen has a dream to create and build Utah’s first gay and lesbian hockey team, and has been promoting the idea to Salt Lake City’s gay sport groups, non-profits, and assorted queer and straight media and bloggers. Because of his efforts, the first skate-and-meet was well attended with about 14 female and male skaters. Only half of those expressed an interest in actually learning or playing on a Utah gay hockey team. The others were there to support Lubsen and take a skate on the ice. 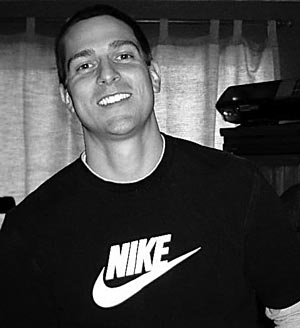 “According to my contact with other gay teams in the United States, it usually takes up to a year and a half for a new team to get established,” said Lubsen. “I would like to get this team together in four months.”

As a founding member of the Colorado Gay Ice Hockey Association, Lubsen estimated it took about four to six months to get enough players to be able to rent a ice rink to have a team-only practice. Most ice rinks are open to the public. Reserved ice rink skating requires teams and coaches to rent the rink privately for practice and play.

“So this is a work in progress, my goal is to develop leadership here — people who are interested in forming the organization and who can actively help build a team,” said Lubsen. “We hope to encourage as many straight allies to become involved with the team, drawing from those who are already playing hockey who also believe in playing in a non-discriminating and culturally diverse environment.”

Because Utah is an active winter sports state, there are many amateur hockey leagues already in existence. “There are multiple levels of play from A being the best, to D being beginners. We will start by playing in a D recreational league and go from there,” said Lubsen. “Many of the recreational leagues that are considered men’s leagues still incorporate women. There are also leagues that are specifically designated as co-ed.”

Lubsen acknowledged an unspoken rule, where some women wear pink on their uniform, on gloves or a helmet, to let men know that they are a female playing in a largely male group. “With adult recreational leagues, the hockey is non-check, less aggressive and with being fully padded, even getting knocked down or pushed, is less of an issue when you are equally padded,” added Lubsen.

Women playing in the USA Hockey League play by the same rules as men. All Utah Gay Hockey team members will eventually join USA Hockey to be eligible to play in any league or national tournament. A complete set of rules exist on the Utah Gay Hockey Association (UGHA) website.

“Skating is indeed a primary skill, however, skating naturally develops once the player is in full gear, because there is less fear of falling.  Beginning skaters will see their skills quadruple in the first year,” said Lubsen. “All practices will involve skating drills, puck-handling drills, shooting drills, strategic coaching and a scrimmage.”

To start, the Utah hockey team will practice at public ice skating rinks, where renting the skates and time on the ice can be as little as $4 for two hours. The general public will be using the rink also so learning to skate with others on the ice is the first lesson.

“I plan on coaching some of the basics to get the group started,” said Lubsen. “After that I have already been in touch with some advanced players/coaches in town who are interested in helping me.”

There are equipment costs and ice rink reservation costs to consider. Equipment required include an official helmet with faceguard, skates, a stick and gloves. Lubsen suggests getting a mouth guard mentioning that falling on one’s chin or getting hit in the mouth is the most common injury when starting hockey play.

Locally, the Players Bench is a dedicated hockey retail location in Murray where beginners can buy used equipment and try out specific gear. Gear can also be found online, but fit is the major concern for some of the equipment, and experts at local retail stores can better steer beginners to the correct size & fit.

“Our goal is to make hockey affordable for all walks of life. League play is usually $150 per person. Our goal is to have 14 to 16 players per private practice so that ice time will run $10 a session,” said Lubsen. “Ideally we will start practicing at least twice a month, possibly once a week if there is enough interest. The dues would simply be a pre-payment to x-number of private ice sessions.”

For more information on the Utah Gay Hockey Association go to www.utahgayhockey.com or e-mail [email protected] The next skate-and-meet is scheduled for Wednesday Jan. 26, 2011, from 7-9 p.m. at the UofU Steiner Aquatic Center & Ice Rink, at 645 S. Guardsman Wy (1580 East).

Video: Gus Kenworthy on being one of the first openly gay U.S. winter Olympians