For a very long time I’ve been wanting to go to Fratelli Ristorante in the south end of Salt Lake Valley. A few weeks ago, my long-awaited visit came to fruition.

Brad di Iorio and I drove out to a new retail park located in Sandy’s old quarry district. For someone who grew up thinking that there was really nothing south of Murray or Midvale, I was proven wrong once again. Salt Lake has grown into a huge new metro area where people can shop and dine without ever venturing out of their neighborhoods. Fratelli is proof of this fact. 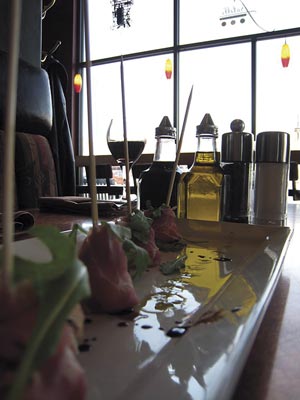 Although located in a strip-mall, the restaurant is modern and elegant. You’re greeted in the entryway by a soothing water feature and high ceilings. The floors are stained concrete slabs arranged in various color patterns, and there is a nice configuration of tables and booths. Modern lighting fixtures has been hung from the ceilings, sporting beautiful Italian glass shades that added good light where you need it — and romantic light everywhere else. The restrooms, or at least the men’s room, were spacious, immaculately clean and decked out with lots of travertine marble and darkly painted walls. I was impressed. One thing, though, that Brad and I both noted was a sort of noisy din during the busiest part of the night. We were seated next to a man with a booming voice and we heard every bit of his conversation. You know, there are two thoughts about noise in a restaurant: sometimes it’s what you want because it does make you feel like you’re in a happening place, but sometimes it’s just annoying. It was Saturday night and Fratelli was busy, which is a good thing.

Brad and I chose two drinks from the cocktail menu while we were waiting to be seated in a booth. Brad enjoyed a martini laced with Chambord and I had a White Tuscan, an Italianate version of the White Russian. Both drinks were delicious and calmed us both down from a very busy day at work. There was a long bar with plenty of swiveling chairs available as a waiting area. I really liked this idea because in many popular places, the waiting area is never big enough on a busy night, so you all have to stand or sit uncomfortably crammed together. For me, this distracts from the experience of dining out. Thankfully, Fratelli’s seems to have solved this problem.

Fratetlli is owned by Dan and Pete Canella who are the children of Salt Lake Restaurant Royalty. They are the nephews of the Joe Canella, who passed away a few years ago, and cousins to the Canella clan, which is famous for the downtown eatery now run by Joe Canella the younger. (By the way, Canella’s is another place in downtown Salt Lake City where I love to go.)

I was impressed by the wine list which had shown a lot of thought, and I was happy to see many Italian wines choices. I brought an elegant Planeta Syrah from Sicily which was light, luscious and could not have been more appropriate for our food. I hope this wine will come back to the state soon since it was discontinued a few years ago. Brad and I drank it throughout the meal.

Dan and Pete were preparing several sample appetizers for us, so while we were waiting for those we enjoyed some house-bake bread. There was a jar of very special extra virgin olive oil on the table with thick and sweet balsamic vinegar for dipping. We were also served a delicious salad of organic arugula in a light, citrus vinaigrette topped with shaved fennel, hand-cut orange sections and really tasty shredded Parmesan — a very nice beginning.

After our salad we were treated to a amuse-bouche plate with a sample of Fratelli’s signature tomato bisque laced with creamy mascarpone cheese, and tasty bite of a cheese focaccia. But what really got our attention was a trio of house-made gnocchi which, in my view, was the highlight of our meal. Gnocchi are the soft, creamy potato dumplings that are hard to make because they can easily turn doughy and gummy. You have to come up with just the right consistency for the little darlings to hold together, while keeping that melt-in-your-mouth quality. Fratelli got it right. The trio plate also had three delicious and quite classical sauces which dressed the gnocchi. Bolognese sauce is a tomato and meat sauce topped with fresh herbs, gorgonzola/cream sauce with fresh spinach and walnuts, and beautifully made pesto. Yummy!

Ken, our waiter, had interested us in the pork tenderloin entrée which was lightly ladled with a honey glaze and served with Brussels sprouts in pancetta. The pork was also plated in a pool of polenta which was creamy, cheesy and flavorful. But I have to say that, although I loved the sprouts, I thought they were a little overpowering for the pork. I may have liked them more as a side dish.

Our second entrée was veal Marsala — tender, pounded scaloppini in a dry Marsala sauce with porcini mushrooms served over linguini. From my perspective, the seasoning was off on the veal dish; it was flavored with cinnamon, lemon juice and capers which, I thought, took away from the flavor of the mushrooms. In my view, there were just too many flavors here. I would have liked the mushrooms and the wine flavors to dominate and they didn’t.

For dessert, we were served a very nice sampler plate of Italian gelato and sorbet, which was a lovely and refreshing end to our evening.

In spite of the mild criticism, Brad and I enjoyed our experience and were greeted with warmth and enthusiasm. Fratelli is truly worth a visit. The menu is extensive with pizzas, pastas salads and classical Italian entrées, and I really need to go again soon. If you live in the south end of the valley, Fratelli is certainly a place you’ll need to go to again and again. Many plates were in the $11–$13 range.

End of Summer Party and Recipes