The 2011 General Session of the 59th Utah State Legislature began on Monday, Jan. 24. As one would expect, the Capitol was filled with lobbyists, special interest advocates, business people and activists. One group of activists was at the Capitol to call attention to the need for continued and expanded housing and employment protections for the lesbian, gay, bisexual, transgender and queer community.

Seated upon the marble steps leading from the floor of the rotunda to the upper galleries, a few dozen silent protesters held signs representing communities throughout Utah. The signs read “I am Draper, and 70 percent of us say no more discrimination.” The demonstrators were silent, except to provide a round of applause for Sen. Ben McAdams (D-Salt Lake City), when he arrived to show his support for equality in Utah.

McAdams has drafted a bill, expected to be released the first week of February, that will extend protections similar to those enacted by Salt Lake City and 10 other municipal entities last year. McAdams said he is “not naive” about the chances of his bill passing the Utah Legislature successfully. He indicated that while he certainly hopes the bill will pass, he feels that this is an issue that merits serious discussion.

On the other side of the issue, however, stands Utah’s GOP majority with a long history of anti-gay stances. Senate President Michael Waddoups (R-Taylorsville) and House Speaker Becky Lockhart (R-Provo) have both intimated that an attempt to pass statewide protections could result in the Legislature attempting to reverse the 11 ordinances in place throughout Utah already. When asked about this, McAdams said that it is something he “worries about” but that he hopes his colleagues realize the scope of the support for this bill. Communities from every part of the state have passed housing and employment protections, and the people overwhelmingly support it.

“Every possible constituency of this legislature supports non-discrimination. Why is the legislature still hesitating?” Eric Ethington, the event organizer, asked. Also, according to Ethington, there are voters from every community, every religious and social background, and every ethnic background that support statewide non-discrimination protections. That is the message he wanted to convey, that 70 percent of Utahns believe that it is time to extend protections to everyone.

Ethington plans to maintain a presence at the Legislature during the session, sponsoring citizen lobby days on his own and in cooperation with Equality Utah. According to him, “we have a lot of momentum.”

Mo’s vs. ’Mos: The battle between Mormons and Gays 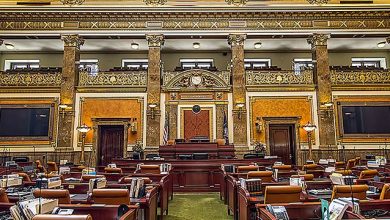