A bill is moving through the Iowa Legislature to authorize a public vote on amending the state constitution to ban same-sex marriage, civil unions, domestic partnerships and any other legal recognition of gay or lesbian couples.

A House committee approved the measure 13-8 on Jan. 24, and it is expected to pass the full House, where Republicans hold 60 percent of the seats.

However, Senate Majority Leader Michael Gronstal has vowed to block the measure in the Senate.

“This bill intends to forever strip basic protections from loving and committed gay couples,” said One Iowa Executive Director Carolyn Jenison. “Now is the time for Iowans to come together and send a clear message to their legislators that discrimination has no place in Iowa’s Constitution.” (See tinyurl.com/4sam5cf for more from One Iowa.)

Iowa is one of five states, plus the District of Columbia, where same-sex marriage is legal. Internationally, it is legal in Argentina, Belgium, Canada, Iceland, the Netherlands, Norway, Portugal, South Africa, Spain, Sweden and Mexico City. 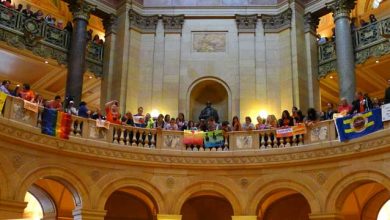