To most sport-enthusiast Utahns, the Queer Utah Aquatic Club is just that: a club for people who love swimming, water polo and all things related to the pool. But starting this year, the club will put its toes out of the water and onto not just the ice of its annual Ski-N-Swim, but onto the track and bike path. 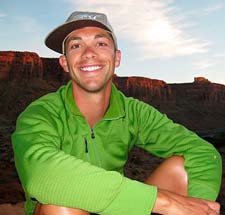 QUAC’s Multisport Division will allow members to participate in events where swimming is just one part of the equation, said Devin Hirschi, the division’s current leader. Multisport, he explained, are events where participants do more than just one activity, such as swimming, mountain biking and relay or marathon racing. Some Utah multisport events include the Cache Valley Classic Triathlon, the Echo Triathlon and the Utah Valley Half Marathon, which he describes as “half iron man and half marathon.”

Although QUAC members have enjoyed and excelled in such events for years, the club did not start focusing on them until 2010, under the guidance of Charlie Ward, a member of QUAC’s board of directors.  As 2011 approached, Hirschi said he began talking to Ward about the many events that QUAC triathletes and iron-man enthusiasts could participate in, a process which eventually lead the club to name Hirschi as captain of its fledgling team.

While Utah has its share of lesbian, gay, bisexual, transgender and queer-friendly sports groups including the Mountain West Flag Football League,  SkiOUT Utah and teams from everything from baseball to bowling, Hirschi said that no one had really tried to put together a multisport group.

“There’s a lot of people with an interest, but they don’t know where to start,” he said.

“Hopefully I can organize teams,” he said, noting that he himself is planning on competing this year in Emmett’s Most Excellent Triathlon in Idaho, and in similar events in Logan and Hyrum.

“Currently, I’m creating a blog where I’ll post events, and where we’ll reach out to QUAC and [Utah’s] multisport community,” he said. At press time, the blog was under construction.

“I feel like the guinea pig as far as organization goes, because nothing’s been put out there before, really. It’s kind of exciting,” he continued.

Although people of all skill levels are welcome to attend the multisport group, a fact which is in line with QUAC’s focus on inclusivity, multisport events are intense, nonetheless. It’s this intensity that Hirschi said drew him to these sorts of competitions.

“I’ve always been a fan of participating in sports,” he said, noting that he began swimming and running in high school and took up biking and triathlons as a college student. “I get adrenaline out of it.”

So far, Hirschi said that he has received a lot of interest from QUAC members and non-QUAC multisport participants of all sexes and sexual orientations.

For more information about the multisport team, visit quacquac.org, and click on the “multisports” tag.

Abode Brightens Up Any Abode

Literary Issue: An Evening Such as This

8: The Mormon Proposition: An Interview with Director Reed Cowan