The expanse of the Utah arts community is, in some ways, mind-boggling; thankfully, the community includes many queer artists who, through their chosen mediums and tasks, continually strive to help open the minds and hearts of all people through hard, dedicated work.

But how accessible has the arts in Utah been for gay, lesbian, bisexual and transgender artists and issues over the last 30 years? Decades ago in Utah, a stipulation that male ballet dancers had to adhere to was to be married.

“Oh sure, everyone knows that controversy sells, but in the ’80s, and certainly before, it was fraught with serious issues,” says Pruyn.

Certain concerns, according to Pruyn, include: How do you get the money to put it up on the stage?  Public granting organizations are always getting their hands slapped for giving money to “profane artists;” what will this show do to my audience base?  The seats are full for this show, but will more conservative audience members steer clear of the next one? Will the reviewers embrace it because it is brave, or dismiss it because it isn’t in line with community values; certainly, the out queer community will come, but can you get the attention of the “legitimate theater” audience members, or would they be too scared to sit in the seats? What would doing it say about you – especially in the newspaper? Pretty much, you gotta be “out” to do queer theater.

Several queer artists, whose time in the Utah arts scene ranges from as little as five years to as many as 30, share similar experiences, mostly positive, of queer inclusion and influence in the arts. And each share hopes for the future of queer arts and of the whole spectrum of the arts community.

Once a concert choir vocalist, Baigue first felt the acting itch when he was 16 years old. He attended acting classes at the Salt Lake Community College, then entered the University of Utah Actor Training program. Over the following 20 years, Baigue has performed in numerous stage productions. Two of the more well-known gay-themed plays he’s performed in are The Boys in the Band and Angels in America.

According to Baigue, the theater community has always enjoyed a healthy population of queer people, at least over the last couple of decades.

“I would like to excite more people to participate in the abundant art in Utah, both as consumers and creators, whether the material is easily accessible or challenging and experimental,” says Baigue on the future of the arts.

Beecher is known as the “fiddle preacher,” which is fitting for a person who has been “playing the violin for 26 years.”

“Which is strange because I’m only 25,” jokes Beecher.

A graduate of Loyola University, she has been playing professionally for 10 years. She has played the Utah Arts Festival, Helper Arts Festival, Pride Day and the Women’s Redrock Music Festival.

“One of my favorite [gigs] was when I played the role of a musician in a Pygmalion production of Sordid Lives,” says Beecher. “Fun, fun.”

During her time as a professional musician, Beecher says that queer inclusion in the medium has not been an issue, but rather the mindset is “if you can play, you’re in.”

“It would be great to spend some time and money educating the general public about art, music, dance, etc.,” says Beecher about the future of the arts. “If people aren’t totally turned on by the brilliance of our local arts scene it’s because they don’t know enough about what they’re experiencing – what they’re hearing, seeing, tasting and smelling. It is also the job of artists and those who support artists to let people know how to have a relationship with the arts.”

Only a five-year addition to the Utah Arts community, Geertsen is a native Utahn and studied broadcast communication at Southern Utah University before moving out of state. He has an extensive background in television.

“Upon leaving television I began working as a stage manager, eventually becoming a member of Actor’s Equity Association,” says Geertsen. “Prior to my current position I stage managed for Utah Contemporary Theatre, Egyptian Theatre Company and Salt Lake Acting Company.”

Geertsen admits he is somewhat unfamiliar with the history of theater in Salt Lake City, but believes “it is impossible to remove the influence of the LGBT community from the performing arts.”

“Queer artists, designers and performers are evident and strong voices in every theater I have been a part of here,” explains Geertsen. “Exploring the LGBT experience is not in short supply with what is produced here.  It’s impressive that the dialogue is so strong and continuous.  Every professional theater company here has beautifully contributed to the conversation.”

“From Charm and Angels in America at SLAC to PTC’s gorgeously staged A Chorus Line and upcoming Rent, producers here are not afraid to not only touch upon queer subjects but embrace them fully,” continues Geertsen.  “Even the local universities create great pieces of theater that are known for LGBT themes such as the University of Utah producing Rocky Horror Show and Weber mounting a beautiful Laramie Project. They are wholeheartedly open and exciting.”

In regard to the future of gay influence on the performing arts, Geertsen believes it will remain “assured and solid.”

“Queer individuals not just contribute to the arts; many of them are respected pillars of the wider community as well.”

“In the future I think it’s time to move beyond making being gay extraordinary.  The conversation needs to shift to queerness being ordinary, average and well … just like everyone else,” says Geertsen. “It would be an amazing shift for there to many more stories about homosexuals where the focus isn’t on homosexuality.”

A 14-year veteran with Odyssey Dance Company, Johnson has “thrilled” and awed many dance enthusiasts since his Odyssey debut in the inaugural season of Thriller (ODC’s most popular show). For the past two years he has also been the company’s associate director.

“Over the years I feel that the biggest change in the arts community has been a more informed, and wider audience,” says Johnson. “Thanks to exposure from TV shows, such as So You Think You Can Dance and Dancing With the Stars, a broader audience has re-learned to appreciate dance in its art form. Although I would say that these shows do not set a great standard for what dance as an art form really is, they have definitely sparked interest in those who may not have been interested before.”

The world of professional dance has, since its beginning, been believed to be riddled with homosexuals, even in Utah, according to Johnson.

“I think that it’s probably harder for a straight male dancer to defend his sexuality, at times, in this medium of arts, then for a homosexual dancer to be out,” Johnson says. “The hard part for most gay dancers is maintaining a sense of who they are without being forced to act like someone they are not.”

Hopefully the future will be full of acceptance and full of art in every form,” continues Johnson, “Whether it’s dance, opera, painting or acting, art is the truest form of self expression. With that self expression, comes diversity, and with that diversity, comes so much beauty.”

As the resident set designer for Pioneer Theatre Company for more than 30 years, Maxwell believes change is happening in regard to lesbian, gay, bisexual and transgender influences in the arts, especially in the upcoming summer months.

” There’s Paul in A Chorus Line, Christopher Wren was played as gay in The Mousetrap and Steven Fehr’s choice to play the stage manager as gay in White Christmas,” remembers Maxwell. Pioneer is producing Rent this summer which has several gay characters.”

“The best queer theater is when being queer is not the source of drama,” says Myhre. “It is just who the character is, like in boom.” (The character of Jules is a gay man, but the story is not about his homosexuality.)

“Over SLAC’s 40-year history, it has been at the front line in presenting plays with queer characters,” continues Myhre. “Our audience is built with warm, smart, open-minded and accepting individuals.”

Myhre believes, however, that “there are so many queers out there who are missing out on great theater.”

“I would propose a ‘bring-a-queer-to-the-theater drive.'”

Over 15 years, Parsons has been showing her art where ever she could until she got into galleries and art festivals, which included, among other places, in restaurants and courthouses.

With admittedly minimal training, Parsons has made a name for herself. Her emphasis has been on oil painting – particularly figures and portraiture. “I developed my ever-changing style art intuitively,” she says. “I have always spoken the visual language of art easily and fluently.”

Parsons describes herself as a rebel artist, one who doesn’t play by the rules. Her subject matters have ranged from therapeutic need to environmental activism to animal suffrage.

“I’m very sensitive to the suffering of animals and environmental degradation due to our insatiable, self-centered, meat-addicted, rapacious way of life in civilization,” Parsons explains. “Whether or not there is a place for an artist like me in the Utah art market, I’m here, and I’m not afraid to speak out anymore.”

“My role as a queer artist in the Utah art scene is to be unique, and to stand out as different in order to bring attention to the issues that I care about,” she continues. “My gender-queer lifestyle gives me an interesting perspective on the world that I might not have otherwise, which I am grateful for.”

Though Parsons admits she hasn’t felt excluded by the art community in Utah, she believes that it is “continually getting more and more progressive and inclusive of queer issues.”

Her hopes for the future of the arts is to return to its roots as “a service, an expression” rather than a commodity, a blatant act of consumerism.

“I would like to see more artists daring to speak their truth, even if it isn’t sellable,” Parsons says.

Thorell is a Utah native who says his profession is that of a “theatre-maker.” He’s been the Props master with Ballet West for 12 years and before that, a 10-year stint at the Utah Opera.

But to become a “theatre-maker” one must perhaps follow in his footsteps: “I have worked for theater, dance, opera, rock ‘n’ roll, radio, installation and Gorilla Theater,” says Thorell.  “I design sets, lights, sound and foley effects, and I direct some, act some. I used to be a rhythm tap dancer, and an African hand drummer.”

Thorell agrees with the others that queer influence has always been evident in the Utah theater world, at least during each of their times in it. And, as with several of the others, he’d like to see the theme of “homosexuality” itself removed from the future of arts.

“I have done many “queer” shows, gay plays, drag, new works, etc. for different companies and myself,” he says. “I’m kind of tired of it when it is just that … who cares!  However, if it’s a human piece with some queer themes … way more interesting.” 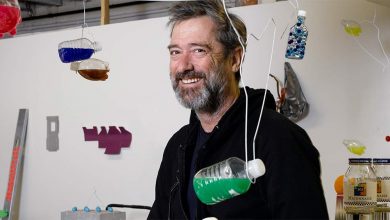