Thou shalt not get gay married

Another New York state senator, Carl Kruger, is being investigated by the U.S. Attorney’s Office for setting up shell companies to fund a home for a Manhattan gynecologist which Kruger has “an unusually close and intimate relationship with,” according to public records. The New York Post reported that Kruger, who voted against legalizing gay marriage in 2009, is in a gay relationship with the gynecologist.

Thou shalt not hold gay parties

Thou shalt not commit adultery

Possible GOP presidential candidate Donald Trump stated adamantly that he is “not in favor of gay marriage.” Trump has been married three times – once to a woman with whom he was having an extra-marital affair.

Another anti-gay thrice-married adulterer, Newt Gingrich, was publicly called to the carpet by a college student at the University of Pennsylvania. Gingrich is also being touted as a possible presidential hopeful.

Thou shalt not steal

New York State Sen. Shirley “The Gays Are After Me” Huntley is being investigated by the state’s attorney general for funneling some $400,000 in taxpayer monies to non-profits to which she is affiliated. A Huntley campaign mailer claimed that she had received death threats from gay marriage supporters, but local media and activists are extremely skeptical and call it a ploy to get support in her election efforts. 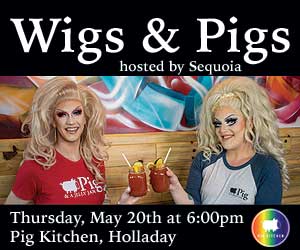