Nova Starr is a creature. She was contrived by the mind of a drag genius. She has gone on to win two national drag pageants, Miss Gay International Pluss 2010 and most recently the Miss Gay United States at Large 2011.

Working with Nova is a wonderful experience, and in addition to being a fabulous person and entertainer, she has huge administrative talent and brings professionalism to the stage, said J.P. Gulla, the event coordinator for the Miss Gay United States Pageant.

“What an incredible individual,” Gulla said.

Nova is a competitor and one of the most famous divas in the nation, Gulla said. 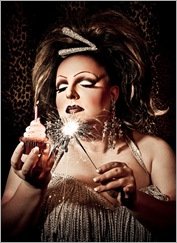 “Nobody wants to see a skinny, little sweet thing come out on stage,” said John Griffin, the performer behind Nova Starr. “Nova is a loudmouth. Think Rosie O’Donnell in her early career.”

Nova depends on Griffin for life and creation, not the other way around, he explained.

“There’s a huge misconception out there that the drag persona is who I am; that’s simply not true. But Nova has taught me a lot of lessons I use in my adult life, and I’m not just talking about the many uses of duct tape,” Griffin said.

But Nova wasn’t just born out of nowhere, Griffin said.

“I started doing drag in a little coffee shop in Colorado when I was 14 years old,” Griffin said. “It was the only way for me to escape an unstable home life.”

Griffin said he always admired the fabulous queens and divas. Watching Joan Crawford flipping her feather boa around her neck, and other beautiful women, fascinated Griffin.

“It started as an escape, but it turned into an art form. It gave me something to look forward to. Being gay in Colorado was not cute,” Griffin said. “It was a healthy way of expressing who I was.”

Griffin went to Dad’s Coffee Shop every Saturday night to hang out with all the other kids that hung out and to put on drag shows.

“My first drag name was Pump Tisha,” Griffin said as he laughed. “I don’t know that I should have admitted that.”

While Griffin said he never officially came out at school, he did not try to hide who he was. His high school didn’t have a gay-straight alliance and he faced almost constant bullying. He even spent almost a week in the hospital after other kids followed him home from school and beat him with pop cans in socks. The beating lead to a discussion with the school board and the national director of PFLAG.

“I think all the bruises and bumps I got growing up really molded me into who I am today,” Griffin said. “I can honestly look into the eyes of young gay teens and tell them that it really does get better.”

What started as a simple coffee-shop drag show led the performer to pursue a career in fashion and Griffin studied at the Fashion Institute of Technology in New York City.

“Every time you see Nova walk out on that stage, you’re looking at more than $1,000 per outfit,” Griffin said. “From the rhinestones to the outfits, I have everything custom made.”

But through all the glitter, glam and local-celebrity, Griffin said Nova’s shows are about more than just the drag.

“My main show has always been, and will always be for the 18 and over crowd,” Griffin said. “Even if for just five minutes, I want to provide an escape for young gay people. I want them to have a place where they feel safe and feel like they belong.”

One of Nova’s defining moments was when a grandmother and grandson approached her after a show at Club Axis. The grandmother told Nova that she was grateful for her help in creating a safe place for her grandson after he came out to his parents and was disowned.

“It was so touching,” Griffin said. “She told me that it was rough growing up in this state and that my show helped him. I knew it was tough for him, and he took his own life six months later.”

Despite the glamour and glitter, drag is an escape, an art form and a way to bring the community together, Griffin said.

“Everyone does drag,” he said. “Whether it’s the leather daddy in a harness, the twink in his skinny jeans or the bears woofing at each other. Baby, it’s all drag.”

Griffin said he plans on keeping Nova in the spotlight and he hopes to continue to compete in pageants. He has traveled the nation representing Utah as Miss Gay United States at Large. Grifin was also recently featured in the books, 100 of the Most Influential Gay Entertainers and the Official Drag Handbook.

“To win a drag pageant takes dedication and training, just like any other pageant or competition,” he said. “For my last competition there was an interview, a talent section, a formal wear section and a patriotic-themed section.”

Griffin said no matter what pageant he competes in or where he performs, he’ll always be grateful for the love and support he’s received in Salt Lake City.

“It takes a village to build a queen,” Griffin said. “I’ll always be grateful for everything and I love Salt Lake.”

Jon Jepson: Working from the Shadows

Christine Johnson: A Progressive Voice on the Hill