One of my earliest memories is of my father coming home from work, setting his green and white lunch box, that my mother so dutifully prepared for him earlier that day, on the counter and giving her a big kiss. At the time my father worked nearby and my mother was staying at home with the five boys, a regular old basketball team.

But no matter the day of the week, the time of the year or what else was going on in our lives, my father would come home from work, wrap his arms around my mom and lay a big one on her. I didn’t think much of it because it was so normal. The love between the two was something that anyone with eyes could plainly see. My father loved my mother and my mother loved him back. There was something there. A chemistry that was immeasurable.

As I started to get older and made my way through the awkward stage of life that is high school, I too, started to date girls. I tried dating all kinds of girls; white girls, Latina girls, big girls and small girls. But there was never a connection. I thought that I just needed time to reach a point where girls were as interesting to me as boys were. I was patient and dutiful.

I still remember my first kiss. I tried to copy the people I saw in the movies, and Jenny was a willing participant. I was young with blonde, curly hair and blue eyes, and I had a swimmer’s body. While still awkward, I swam four hours a day and barely had an ounce of fat on my six-foot tall body. As we sat in my car in her driveway listening to, “The Places You Have Come to Fear the Most,” by Dashboard Confessional, we only made it to track two, “Screaming Infidelities,” before we started kissing. My mind was racing. Here I was smooching a girl as she rubbed her abnormally large breasts against my chest and all I could think of was how annoying her boobs were and how much I liked the song.

“I hope I don’t think of Jenny’s boobs every time I hear this song in the future,” I thought to myself as she locked her lips with mine and began slipping in tongue.

The experience was traumatic and just as I had predicted that fall evening, every time I hear Chris Carrabba scream out the lyrics, “Your hair is everywhere!” all I can think of is poor Jenny’s boobs and how obtrusive they were.

The realization that I would never have that same connection with a woman that my father did was slow to come by and hard to swallow. It took years of fighting and praying that god would make me fit in with everyone else. I wanted to do just like I was told and fall in love with a woman.

Marrying a woman was never on the table for me. Not really. I knew that I would never be able to give her a kiss when I walked in the door, her boobs would probably be too much in the way. I knew that I would never have that immeasurable chemistry and I knew I could never get excited about kissing a girl. But I certainly knew the pressure to conform and take a sweet young girl to the Mormon temple. But I also knew it wouldn’t be fair for either one of us. If I did that to some young woman, I would be denying her the opportunity to have that chemistry with someone who didn’t mind her abnormally large breasts. And I knew I wanted to make a connection with someone I could be attracted to. So I am a sucker for big arms and a beard, instead of boobs and long hair. The connection is still the same. The chemistry is still immeasurable, even if it’s a little different.

A year of bridges 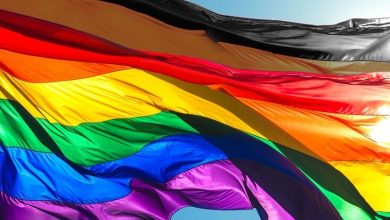