It finally happened, another boy at school called Gus “gay.” No, the kid wasn’t referring to sexual orientation; he was throwing it out as an insult. It happened about the same time that Los Angeles Laker Kobe Bryant called a referee a “faggot.” That’s the last time you’ll ever read that word in my column.

The school handled the incident perfectly: it wasn’t acceptable and if it happened again there’d be more than just a trip to the principal’s office. We did our part too: we invited the offender to Gus’ birthday party. As a matter of fact, he’s jumping on our trampoline as I write this column. We figured putting faces to his “insult” eventually will help him choose better words.

But we have to take it one step further, we have to choose better words ourselves. As we celebrate Pride, I’m ashamed to admit I’ve called other gay men the same word that Kobe Bryant did. Nobody ever demanded that I apologize.

I’m of an age where I remember a movement to “reclaim” words of hatred. Honestly, I never really understood that argument. When anyone uses a hurtful word as a way to cause one group pain, reclaiming it won’t diminish the hatred, it simply increases its usage.

And the reverse is true too. The more we use positive words, the more they become accepted. I recently learned this lesson from a total stranger.

In May I was at a conference where the keynote speaker was former President Bill Clinton. The woman sitting across from me was very excited to hear the president, and we struck up a conversation.

During our chitchat, I mentioned that I have a partner and kids. She inquired about what life was like for gay men with kids in Salt Lake. I told her although we were a pretty rare breed, it was surprisingly a non-issue.

She leaned in and nearly whispered, “Can I ask you a really personal question?” Um, OK. … “Would you guys ever consider getting married?”

I explained how we are married. In fact, I said, we got married twice.

Then she asked, “If you’re married, why don’t you call him your husband?”

I didn’t really have an answer, so I finally stuttered, “It sounds strange.”

My new friend pounced on my lame excuse, arguing rather convincingly that so long as I didn’t use “husband” to describe the man to whom I am a married, no one else would. And she continued by telling me something that I already know: the more gay people use the word, the more accepted by everyone it will become.

She’s absolutely right, of course. The more we as a community use words, the more accepted by everyone they will become – and not just the positive words.

I’m incredibly thankful that my sons’ principal made it very clear to the young boy that using “gay” as a derogatory term was unacceptable. Honestly, I’m not sure how many principals in Utah would have done the same.

But that’s just the start of the battle. We need to make sure that everyone everywhere understands that using derogatory words for gay men and lesbian women is wrong. And the place to start is in our own community.

I don’t want my sons to be angry some day when they hear the “f-name” used because they know it refers to their dads. I want them to be angry because it’s an unacceptable word, period. In the same way I hope they’ll understand that the “n-word” is unacceptable. We need to recognize that we can’t have it both ways: it’s simply hypocritical to demand Kobe Bryant apologize for using a word that we ourselves banter about.

To me Pride isn’t a festival held on one Sunday in June; it’s about celebrating ourselves as a community every single day of our lives. Celebrate ourselves, not tear ourselves down and pretend it’s empowering.

And just as my new friend, Nancy, taught me the reverse is true too. If I married another guy, he’s my husband, not my partner. If the rest of the world is going to start recognizing that fact, I need to start using the correct term for him. It may take me a while, but I need to do it.

A single word may seem like a minor issue, but it has great impact. Just the other day, thanks to some fabulous educators, Gus told us he knew what “gay” means. He said, “It’s when two men love each other and get married.”

And I know that when two men get married, they’re called husbands.

Of parking spots and kids 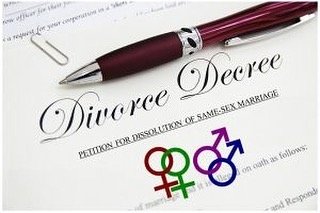