IGLA is held usually in July, combining with the Gay Games every fourth year, as IGLA runs the aquatics at the Gay Games. This year, the West Hollywood Aquatics team, with the University of Hawaii Aquatics, Life Foundation and the Family Equality Coalition, will host gay and lesbian athletes from all over the world at the four-day meet: an open water, ocean swim race, a couple of water polo tournaments, and diving and synchronized swimming competitions, at the University of Hawaii Kahanamoku aquatic complex.

The Pink Flamingo, a trademark IGLA event that QUAC has won in the past and arguably helped perpetuate as an annual event, will be held on the final day of the competition, Sunday, after the final water polo match.

“QUAC’s entire water polo team is going along with 12 to 15 swimmers,” co-captain Jeffrey Wood said. “Most of us will be staying in a hotel together, as it’s much more fun that way.”

“Sterling and I became team captains in the fourth quarter 2010. We are responsible for a few things, which include, but are not limited to: building team spirit, social functions, fundraising, marketing, promoting QUAC, and designing this year’s banner and IGLA/QUAC team suits,” Wood explained, who is also hoping to develop many new friendships with fellow gay, lesbian and straight allies at IGLA.

Also attending IGLA this year following a three-year break is Masters QUACer, Barbara Nash, who has attended past IGLA Championships in 2005 in Atlanta, the Chicago Gay Games in 2006 and IGLA in Washington DC in 2008.

“I specialize in breaststroke because I really like the technical aspects of the stroke,” said Nash, who joined QUAC in 2004.

“My best race was a loss in the 50-meter breaststroke to Dale Barnhard from DC Aquatics at the 2008 IGLA Championships,” reminisced Nash, a past board director member of the Pride Center. “She beat me by almost three seconds – that’s a humongous blowout at that distance. But even so, it turned out our times were first andsecond in the U.S. in our age group, and she ended up first in the World Masters and I was ninth.”

“The rewarding aspects are the camaraderie, enjoying a wonderful event where regardless of the times or points, all the swimmers understand that everyone wins just by participating,” Nash said.

Attending his eighth IGLA competition, Val Mansfield explained that swimmers do not need to qualify to participate at IGLA. Each individual can register up to five events, not including team relays.

“I will be competing in the 50- and 100-meter freestyle as well as the 50- and 100-meter backstroke,”  said Mansfield, who has also attended two Gay Games/IGLA championships. “My personal goals are always only to do better than my last. I think that may be a lowered expectation from doing better than my best, but my age may be catching up with me.”

“One thing that may be to my advantage is I will be moving into the next age category beginning this year, so I may be competing against mostly different people than last year in Cologne,” added Mansfield, referring to the Germany Gay Games. “There are some other events, like a dance, a luau and an awards dinner.”

Mansfield remembers attending his first IGLA in San Diego in 1997.

“One of the things I remember from that year was the team winning the Pink Flamingo, which is a water ballet/synchronized swimming routine, usually in drag,” Mansfield said. “I remember the audience shooting to their feet at the end of the performance with the loudest, longest and most spontaneous applause I’ve ever seen.”

QUAC will have no competitors participating in the diving competition this year but will be sending a water polo team who will be the team to beat after their gold medal win at Gay Games VIII in Cologne, Germany in 2010.

QUAC’s water polo team first attended IGLA in 2004 in Ft. Lauderdale, starting out in last place and finishing in seventh. At the Atlanta IGLA in 2005, the QUAC team played for the silver medal but lost to take fourth place. At the 2006 Chicago Gay Games, QUAC A team took silver while QUAC B took fifth place, while at the Paris IGLA in 2007, QUAC A took the gold while the QUAC B took fifth.

At the 2008 Washington DC IGLA Championships, QUAC A took silver, while QUAC B took eighth place. QUAC didn’t send a team to the 2009 Copenhagen IGLA, only sending a few team members to compete on a combined US team, but QUAC took the gold in 2010 against a Melbourne, Australia team, at the most recent Gay Games.

“If we have enough players and they will let us, we may field two teams in the trophy division,” Heaps said.  “We are going to have a women’s team this year too, something I’m quite excited about.”

Lisa le Duc, QUAC vice president and water polo member, said that IGLA has only hosted a women’s water polo tournament once in the past.

“They have only had a woman’s tournament at the DC IGLA and now,” le Duc said about QUAC’s women bronze medal finish. “There needs to be at least four teams to have much of a tournament and there just isn’t always enough women interested.”

Le Duc will be competing on both the competitive QUAC water polo team and in the women’s tournament. “I hope to learn how to surf while I’m in Hawaii,” she said.

QUAC will return in mid July preparing for Aqua AID, a fundraiser for the Utah AIDS Foundation, serving drinks at the Pride Center’s Volunteer Dinner and hosting a table at Equality Utah’s Gala Dinner. And QUAC will host another car wash when they return. 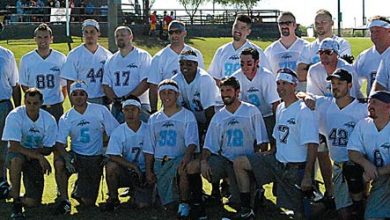