The road from a mission reunion is fraught with danger and excitement.

I just finished watching that most holy of all “family” events, The Tony Awards, and I must say Doogie Howser positively gave me the vapors. Now there’s a princess who has ripened rather nicely. It was especially moving that The Book of Mormon musical won so many awards.

When the very, very cute Elder Price so earnestly sang, “I Believe,” I was very nearly raptured right up into heaven, even though the official rapture date has been postponed until October.

(Side note to God: Please, please, please don’t let me get raptured while I’m wearing my Pride Day pink-sequined dress with the twirling beefcake breasticles. It may look fabulous with a capital F, and would send all the other angels into fashion hell, but it chafes and I don’t want to spend eternity chafing. Besides, it is next to impossible to sit demurely on a cloud while wearing a crinoline skirt without giving a very indiscreet presentation of the family jewels. Anthony Weiner would be so jealous.)

All those singing and dancing missionaries caused me to reminisce about one of my mission reunions a long, long time ago, very shortly after Utah attained statehood, when I had not yet traded in my necktie for a string of pearls, my briefcase for a purse, and my Mr. Mac polyester iron weave two pants suit for a polyester evening gown.

During LDS General Conference weekend, I was driving home from my mission reunion still dressed in my white shirt and tie, and noticed a movie theater marquee with the title XXX Samurai Dick staring Ron Jeremy. I thought to myself, that’s a movie that I’ve never seen, but since I went to Japan on my mission I might really like it, so in an effort to broaden my horizons, I stopped to check it out. I could barely get my wallet out of my pocket because my nervous hands were trembling so much. It was so dark when I entered the theater that I couldn’t see anything at all, so I sat in the very closest chair. There on the big screen, to my amazement, was “Man’s Search For Happiness;” I mean, oh my heck, it was sex! Of course it was straight sex, but there was a penis involved. Oh the thrill. Oh the danger. Oh, the boner!

In this heightened state of excitement, my “spidey senses” became electric.

I quickly became engrossed in the “intricate character-based plot lines” of the movie. After a while I realized that someone was sitting in the very next chair. Soon, I began to sense that his knee was pressing against my leg. I thought that perhaps I was encroaching on his personal space so I withdrew my leg further into my space. Soon his leg was pressing up against mine again and I finally caught on that it was intentional. I almost stopped breathing but I didn’t pull my leg away this time. All the while my eyes remained locked on the movie screen. Soon his leg was rubbing up and down against mine. Again I didn’t move, still staring at the movie, but I suddenly had an overwhelming urge for some “candy” to go along with this movie.

After what seemed like hours but was probably only five minutes, his arm pressed against mine on the arm rest. I was beginning to sweat. His little finger gently interlocked with mine and he slowly drew my hand toward his “candy counter.” My heart was pounding so hard that I could almost have passed out. There, in his lap, I felt the whole forbidden “candy store” — firm, warm and inviting, straining mightily against the restraining fabric. He rubbed my hand over his packaged sweets and placed my fingers gingerly on the zipper. I slowly, carefully tugged down on the zipper to free a large “Twizzler” from its package. “Oh sweet mystery of life, I’ve finally found you.”

Just then, a police officer entered the auditorium with a flashlight and began shinning it up and down the rows of the audience. I quickly withdrew my hand, and my neighbor placed his coat over his lap, thereby hiding his “candy” from prying eyes. All the while, our eyes were locked firmly on the movie directly ahead. After the “storm trooper” had finished his inspection and retreated to the foyer, my neighbor again drew my hand back to the Twizzler. Little by little, my fingers continued to explore and found two “Milk Balls.” Good things really do come in threes! Just as the treats were beginning to melt in my hands, not in my mouth, the “storm trooper” was back again, inspecting the audience. I lost my nerve and left the theater, vowing that I would return again to find more candy because my sweet tooth had now been awakened.

My only regret was that in the darkness, I never got a good look at “The Candy Man.”

Like always these events leave us with several important questions:

1. Must I dress appropriately for the rapture for the entire month of October?

2. Should I trade in my missionary name tag for a diamond broach?

3. Is licorice the iron rod onto which we are supposed to hold?

4. Is polyester the one and only true celestial fabric?

5. Was the police officer looking for lost children?

6. How is it that after starring in 1,246 movies, Ron Jeremy has not been given a lifetime achievement award? 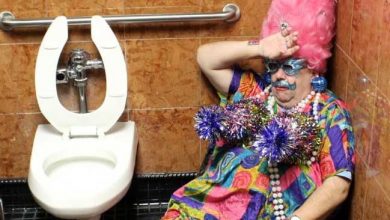 A Tale of Boobs

The tale of a potted petunia 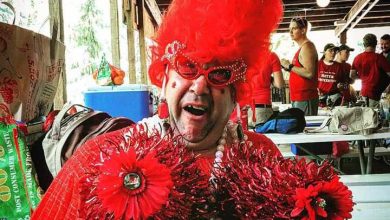 A tale of life on a rollercoaster