Driving up Emigration Canyon was such a trip into the past for me. When I was a little boy, my mother’s uncle Claude and aunt Mary had a cabin up there. It wasn’t the first time I checked out each little lane, wondering if that was the one we used to take to get to the small dwelling. I guess now I’ll never know since anyone who used to go up there has long since passed on.

Anyway, the drive up the canyon was cool and fun and you could hear the rushing Emigration Creek at every corner, a very pleasant, short drive to the Sun & Moon Café.

Carl Weyant and his wife, Marci, are the owners and a very hard-working couple behind the casual café. Carl is the chef and is a graduate of The New York Restaurant School, the other CIA, and is very meticulous about making all of his offerings from scratch. I heard a couple ask if they could purchase some of his barbecue sauce which they had so enjoyed.

Carl and Marci acquired the Sun & Moon eight years ago after Carl had finished a stint as the chef at Solitude Resort. The Sun & Moon is housed in three ancient cabins all conjoined into one large space and it is only feet away from the canyon road so you can’t miss it. The buildings are definitely showing their age as the floors and walls all seem to lean a bit. But this only adds to the charm of this Utah institution which has housed countless eateries over the years.

I have to say that the people-watching at the Sun & Moon is by far the most interesting I’ve experienced in quite some time. The café was full of young, casual couples but also biker dudes and chicks in outlandish attire as well as canyon folk in flip flops, shorts and other totally care-free outfits. I didn’t see one woman wearing makeup, and it was as if patrons went out of their way to dress down and appear as comfortable as possible.

I was led out to the patio, where nearly everyone was dining, and sat at a small table where I could see all the goings-on. I started with a glass of Silver Birch Sauvignon Blanc, which is one of my favorite inexpensive wines, crisp, clean and grape-fruity, it was a very good pairing with the mussels which suddenly appeared before me. The mussels were steamed in white wine, coarsely chopped garlic and grape tomatoes, certainly no frills here but the flavor and freshness were there. The broth was simple and delicious and I scooped it up and dunked my sourdough rolls generously into it. (To be quite frank, I didn’t expect to get mussels here.)

Next, Carl sent out his duck-filled wontons. He explained to me that he smokes the duck and then chops it into a filling for the wontons. The fried dumplings were topped with a delicious cherry-cranberry BBQ sauce and I ate every bite. (I should say that I’m overly sensitive to fried foods these days and to me, the frying oil had a tell-tale odor that was not totally fresh, he did explain that he had served more than one hundred covers at lunch, mainly burgers and fries I suspect, and the wontons suffered a bit from this overly-used oil.) I’m sure this is one of the trappings of a restaurant that has to be both a burger stand and a fine dining spot.

Carl sent out some deep-fried dates wrapped in bacon and stuffed with gorgonzola. They were quite rich and unusual but not my favorite. I washed them down with a fine, little pinot noir, which is a special order wine at the Sun & Moon, a Willenborg from the Santa Rita Hills in California. I was also treated to stuffed mushrooms filled with Italian sausage and broccoli.

For me the highlight of the meal came with a baked square of sea bass served in an orange-crème and Grand Marnier reduction. The fish was topped with shoestring yam fries which were crisp and gorgeous. The sauce was heaven! Creamy, smooth, subtle, perfectly flavored and I asked Carl if he used crème-fraiche and he said it was just heavy cream but the sauce had that unmistakable texture of a fine, French, a’la minute sauce that you just want to drink! With the fish I had a glass of Terredora Falanghina, an ancient Italian white wine which perfectly adapted to the orange flavors in the fish.

I had brought along a bottle of the new La Marca Prosecco and was treated to a small piece of house-made cheesecake topped with strawberries and a chocolate-bourbon drizzle. It was the perfect end to a very nice meal and a fun experience. The Prosecco, although not expensive, was full of gorgeous bubbles, an elegant pale-straw color and a fruity but dry finish. I was very surprised and can heartily recommend this wine.

Something that Carl is especially proud of is the patio jazz concerts which take place throughout the year at Sun & Moon. Offbeat, but well-known groups from all over, love to perform at the casual cafe.

You can receive notices about these concerts by going to the website, thesunandmooncafe.com. Carl also changes his menu often so he can use the freshest ingredients. Having cooked for a while on Fire Island, he is obviously a whiz at doing seafood and his menu is varied and trendy. I hope soon I can go up and enjoy one of his evenings of jazz. 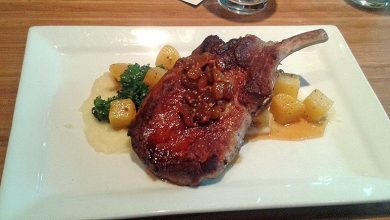