Superstar talks activism, her legacy and how being a gay icon is a ‘tall order’

Lady Gaga is one of the biggest superstars in the world. But speaking to her only briefly during this rare interview, she evades her larger-than-life image with affable charm, self-deprecating humor (take that, so-called penis) and a down-to-earth demeanor. She’s sweet, perverted, articulate and talkative. And she can’t stop gushing about how much her fans mean to her — and when I have to cut her off to get a few last-minute questions in, she doesn’t pull a diva trip. She’s cordial as can be. “I could talk to you forever, you’re so cute,” she says, almost in baby goo-goo, ga-ga talk.

Point is, Gaga doesn’t sound like someone who just scored the best first-week sales of the year so far with Born This Way, her opus that seems to position her as the Mother Teresa of music. Since we last spoke, nearly two years ago when “Just Dance” was charting, she was barely a blip on the pop scene. How quickly things can change.

This time, Gaga spoke about inspiring young gay people, why she cried for a week straight, what she’d do with an Ann Coulter-like kid and the legacy she wants to leave.

We have a lot more to talk about this time than your love for Italian sausages.

(Laughs) I love Italian sausages … as much as I love my own.

Don’t take this the wrong way, but as a fashion icon I have to ask: What are you wearing?

I’m actually in a black bra and underwear. That’s it. The top one is lace and the bottom one is just plain and silky. This is my daywear. I’m walking around my hotel room and I’m going to yoga soon, and I probably won’t change. (Laughs)

How did you spend your last day off?

I watched So You Think You Can Dance, and I’ve been planning my performances for the next few months for television and getting ready for the new tour.

(Laughs) I know, I know. I always do that. I’m sorry. I don’t really take time off. I try, but I think I find comfort in my creativity. It’s like a warm blanket for me, so I will end up in some sort of way creating something or writing something.

How do you feel about your role as a gay icon and a leader in the LGBT-rights movement? That’s a really, really tall order and quite a description. I never set out to be a gay icon or become one or be revered as one, and I’m just really grateful to all the people that have believed in me and my music and my work. The most special thing of all has been that my sort of assimilation as a public figure has very organically stemmed out of who my natural friends were in high school.

I had a lot of gay friends growing up, not even realizing they were gay. We didn’t really talk about it and I went to theater school and I did a lot of shows, so I guess it never really mattered to me if they were gay or straight, and we never really talked about it. We just loved talking about music and art and theater and fashion. So now it’s less about being a leader and more just about being a part of my generation and being part of the fight for equality that I feel is part of who I am and part of my childhood, and part of where I’m going.

The message you stand for as a public figure — about being yourself no matter who you are — is also a big part of Born This Way.

I wish I knew who you were when I was a teenager. Young people these days are lucky to have such a role model. That’s so sweet. Thanks for saying that. I hope that I can really be that, and I hope that they know that it’s so genuine and so authentic.

Which album gave you a sense of belonging and allowed you to be yourself when you were a kid?

I always talk about Green Day because Dookie was the first album that I went to buy on my own. I think because I got bullied in school there was something I really appreciated about punk culture. It allowed me to feel unified with something that was separate from my community at school. Even though I didn’t have a lot of punk friends or I didn’t go to punk shows … because when I was 13, my mother would never have allowed me to leave the house and go downtown to see a punk show — just having the album in my hands and reading the lyrics and listening to the music made me feel like I was a punk, feel like a Green Day fan, feel like I was part of a union that was separate from my situation. That’s really carried through into my music and my dream and my message. But what’s been so great is social media. Unlike when I was a kid, my fans now have a way to get to know each other and be connected through social media so that the culture can grow.

And you’re using social networking a lot as a political platform, urging fans to step up in the fight for equality.

Oh yeah. I was on Twitter and I was firing away like I was on the Senate floor. I couldn’t stop because I thought to myself, almost instantly, there are 11 million people who are receiving this message from me and they have to know what’s going on. Even if I just got five people to call in to New York, I made a small bit of difference.

If you had a daughter and you found out she was going to be the next Ann Coulter, what would you do?

Oh. I’d have to have a sit-down with her.

What’s been the most rewarding moment of your career so far?

So many different things. It was a very, very huge shock for me when I heard the album sales for Born This Way. I just cried for, like, a week straight. (Laughs) It was seven full days of rainwater tears. I think I could’ve filled an entire ocean of gratitude. I just worked so hard on the music and I cared so much that the fans loved it, and all that mattered to me was they loved it. The feedback on the music and on the videos has been so wonderful.

I sat down with the label and I talked to my team and we talked about the new album cycle and I said to them, “I don’t want the goal of this to be that we gain new fans. If we gain new fans, that’s wonderful. But the goal for me is to strengthen my artistic evolution and strengthen the bond between the fans.” That was the single most important thing to me. Not to sell more records, not to gain more fans, not to convert people that didn’t like me before to like me now. That was not what I wanted. What I wanted to do was to look out into the crowd and know that they were stronger than ever; and the thing that has been the most exciting for me is to watch that happen, because what we have, what I have witnessed so far with the release of this album, is that the super-fan section of my fans has grown.

This is basically a dedication to your Little Monsters, right?

It’s a dedication, exactly. It’s not fair-weather fans. These are real fans.

If you could be reincarnated as a real living monster, what would you come back as?

Myself. But I would have all my protrusions be real and I would be a real fairy monster.

How gay of you.

I know. But she would be mean and fierce, too. And have a fake mole. And I would be able to instantly change a wig with a thought in my mind or change my bone structure based on my thoughts.

Two of your songs are named after human features: “Hair” and “Teeth.” What’s the next body part you’ll write about?

Who knows. I didn’t even think of it that way. Where should I go next? I don’t know. I’ve already been thinking about the next album, though. Don’t shoot me.

Can you give us a glimpse into that one?

No, no. Stay on this one. We’re not done yet. (Laughs) I am planning on making the “You and I” video, though, and I’m really excited about that.

Everyone talks about overexposure when you’re as big of a star as you are. Does that worry you at all?

No. You’re just a right or left click away from the other direction.

Have you thought about the legacy you want to leave and what that might be?

Yes, I have. And it changes and grows. I would say that my wish is to be remembered as a cultural force, as someone who was fearless and unpredictable, who didn’t care what anyone thought about what I created but only cared that they thought about it. 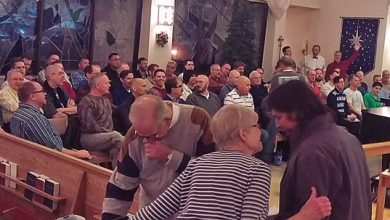 Get to know the Salt Lake Men’s Choir