Running for city office in a small town in Southern Utah may not be the most prestigious position in politics. But queer-rights advocate, and former president of the Southern Utah University Queer Student Alliance, Ben Smith, is in this race for the long haul and is looking for support from allies. He’ has some big ideas for improving the city, but can’t win the race alone. 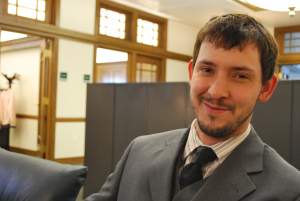 What made you want to run for office?

I’ve been involved in local issues for a while and I worked on the anti-discrimination ordinance that sadly didn’t pass the city council, although a resolution did. It put me in contact with a lot of people who had great ideas all across Cedar City. I wasn’t actually planning to run until a friend made me realize that someone had to find a way to make all these ideas realities and get them discussed in the public square. I’m running because the people I talk to don’t feel like their views are represented and they’re not in the position that I am; I have the time, support and energy to make things happen.

What are some of the most important issues for you and what would you like to see changed in Cedar City?

Most citizens only get a chance to make their views known at city council meetings, and they only get five minutes to speak per meeting. I’d like to see the city improve its online presence and social networking to reach out to people rather than waiting for people to reach out to the city. I’ll have an open-door policy, including walk-in office hours that are more convenient for people that work second-shift or have to be home with their children during council meeting time.

The city leadership has been dedicated to bringing in more jobs, and they’re innovative in their ideas. They are about to vote on bringing a winery to town, and they reduced impact fees to attract more businesses. I think we need to focus more on real careers, not just jobs. SUU graduates don’t stay in Cedar City because they can’t find good opportunities. I’d like to see small grants for local start-ups, and a focus on bringing in tech jobs.

We have a great community here, but as I’ve been speaking with people and I’m hearing that they are feeling disconnected. We have robust volunteer programs that the average resident has never heard of.

When did you first get involved in politics?

I started paying attention during the 2000 presidential campaign. I became involved on a local level as the president of SUU-QSA, and realized that I could do more by getting directly involved. It’s my first race, and everyone tells me that engagement is the key to success, so I’m knocking on every door in Cedar City and asking people for their votes directly.

Do you think your previous involvement in LGBT rights will make it more difficult to get elected?

Not really. The vast majority of people that I talk with are LDS, and the church has supported anti-discrimination ordinances just like I do. Most people believe in basic civil-rights protections for everyone, just like I do. I’ve talked to more people that appreciated my willingness to stand up for what’s right than I have to people who disagreed with those things.

How can people get involved in your campaign, and where do they go to donate?

I need people to knock on doors, make calls and register voters. I’m the only candidate not in a position to self-finance my race, so I also need your donation. We’re in the process of getting our online donation system up and running, so you will soon be able to donate at bensmithforcitycouncil.com or you can email me at ben@bensmithforcitycouncil or call me at 435-862-5552 to volunteer, or if you have any questions.