The California Supreme Court appears ready to rule that the backers of Proposition 8 have the right to defend the measure, which would clear the way for the group to take the initiative all the way to the Supreme Court.

During oral arguments, several judges appeared to express concern that only state officials could defend ballot initiatives, such as Proposition 8.

“So the attorney general and the governor get to pick the laws they want to enforce?” asked Justice Ming W. Chin, a conservative.

Even Justice Joyce L. Kennard, one of the court’s more outspoken liberals, appeared to side with the backers of the initiative.

“What we are going to hold is not limited to gay issues,” Kennard said. “Our holding will apply to any other circumstance when proponents of initiatives are asserting standing.”

The court will decide within 90 days whether or not ProtectMarriage, the sponsors of Proposition 8, have the right to represent the state in defending the appeal after a federal judge struck down the measure last year.

The National Organization for Marriage claimed victory after the hearing.  NOM, an anti-gay-marriage group rumored to have ties with the Church of Jesus Christ of Latter-day Saints, sent an email to their members saying the hearing could not have gone better for supporters of Proposition 8.

If the court rules that the group does not have the ability to defend the measure in court, same-sex marriage would resume in California and the federal appellate court would make no ruling. However, if, as expected, the backers of the proposition are allowed to defend the measure, the case could reach the Supreme Court by next year. 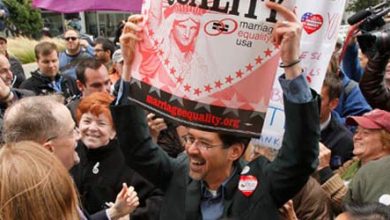 Same-Sex Marriages to Resume in California