Mattie Leyden, who served in the Marine Corps from 1989 to 1993 and was on the ground in the first Gulf War, said she is ecstatic for her gay and lesbian friends, but laments that the repeal could not be completely inclusive. While serving, Leyden, who is a transsexual woman, was in the closet and terrified of being found out she was different.

She had her first sexual experience with a man while serving, but there was something missing, she said.

“I was always trying to fix myself. I dropped out of high school because I thought the Marine Corps would fix me. I thought getting married and having kids would fix me. If I ever write my book, it’ll be titled, I Tried to be Gay. I liked men but there was always something missing. I had to come to terms with myself before I could move on,” Leyden said.

Leyden left her native California and came to Utah to transition.

“I know, people think I am crazy for coming to Utah to transition,” Leyden said while laughing. “But the trans community is really terrific there. I’d still be living there if my kids were closer.”

Reactions from friends in her unit were extremely positive at the 20-year reunion, Leyden said.

“A lot of guys from my unit have been really great. They’ve said that I’ve fought and paid the price to protect the right to be who I want to be,” Leyden said.

Even after serving, trans people often face discrimination and many medical-related expenses are not covered in health benefits plans. There is no reliable statistic for how many transgender service members are in active duty but the Transgender American Veterans Association, estimates there could be as many as 300,000 transgender people among the nation’s 26 million veterans.

While Leyden said she is excited about the lift on the ban for gay and lesbian service members, she looks forward to when trans people do not face any discriminatory barriers in the armed forces.

“I served, I fought, I defended my country. I am entitled to be who I am, I’ve earned that right and so have thousands and thousands of others,” she said.

LDS Church Backs Out of ‘Historic’ Meeting with Gays 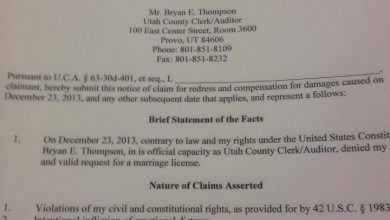