Current The X Factor contestants and Utah residents, The Anser, a pop trio, will perform at the Pink Dot event at Spring Mobile Ballpark on Oct. 11, 5 p.m.

The free Pink Dot event is being organized by the Support Love Courage Council, a group of community volunteers. The campaign is encouraging Utahns to show support for lesbian, gay, bisexual and transgender family members, co-workers, neighbors and friends by attending the Pink Dot event.

Kurt Bestor, ambassador and the emcee for this year’s event, stated in a press release, “Pink Dot is about coming together in a common wonderful place and that’s why I want to be involved. In Utah, we are known for our love and reaching out, it’s what we do.”

The Anser sailed through the first round of competition on the hit Fox television show The X Factor with their performance of Adele’s Rolling in the Deep. The band members are competing for the top prize of $5 million and a Sony recording contract.

For more information, go to PinkDotUT.org. 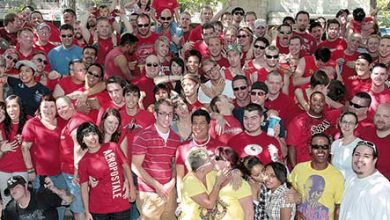