Hip-hop dance group and MTV’s America’s Best Dance Crew season five winner, Poreotics, has been featured in Justin Bieber and Bruno Mars music videos, seen at the Teen Choice Awards and have been nominated for a VMA for choreography. The all-male dance troupe are of Southeast Asian heritage and their list of accomplishments includes a first-place finish in 2009 and 2010 at the USA Division Hip-Hop Internationals and they were named the 2011 Team of the Year at the World of Dance Awards. The sexy, queer-friendly group is managed by Danny Batimana, an openly gay inspirational speaker and dance instructor. Batimana spoke with QSaltLake about what to expect at the upcoming show at Kingsbury Hall on Nov. 30.

How long have you been with Poreotics?

I joined the month after they got off (ABDC) in May 2010. It has been so great. I am the manager and chief financial officer.

When I joined, I had to make a really tough life decision between being a teacher and following the more stable path, or managing these guys. I decided to take a risk and I am so glad that I did. I have learned so much about myself and so much about the guys. I love what they stand for.

What do they stand for?

They stand for being who you are and not succumbing to pressure from society. They didn’t listen to what producers had to say on the show and if they had problems with music, they’d speak out. They were true to their brand.

They want to entertain and add humor, along with being great dancers. They’re really genuine guys who are down to earth.

What can we expect to see at their upcoming show?

It’s going to be a 30-minute full on production. None of the routines (fromABDC) will be incorporated. They really are taking it to the next level.

My favorite aspect of Poreotics is the ability to have fun and perform with so much energy. Can we expect that same level of energy at the show?

You can expect more. The show is going to have a real concert feel to it. The music is electro-house that’s inspired by some of the best DJs in Los Angeles. They have fun and even get a little inappropriate at times, but always in a humorous way. I just hope the University of Utah is more liberal and open-minded than BYU.

Don’t worry, it is. So, how has  your coming out process been? You mentioned in a YouTube video that you’ve never really faced discrimination, is that still true?

I really haven’t had many problems. There was a time in Arizona with my ex, where a guy in a pickup truck started yelling at us. But that’s the only time.

The fans and really everybody that I come in contact with has been so supportive. I think they get to know who I am first and the fact that I’m gay becomes secondary. I am giving a presentation as part of the TEDxYouth San Diego talk. I focus on being comfortable with who you are and overcoming fears. Coming out was my biggest fear and I think people can use that as an example and get from it whatever they can.

Most of the fans are very accepting and a lot put the no H8 tag on their Facebook profile. Most of the fans know that Poreotics supports the campaign and is very accepting. There might be a few that stop following us because of it, but I think that’s just due to a lack of life experience and exposure.

I think it’s a good thing that Poreotics puts equality on the foreground and gets it into people’s faces. I think we gain respect because of that.

What is the world of hip hop like for gay people? What have you seen?

I’m not quite sure about hip hop artists, but a lot of people behind the scenes,  the managers, tour promoters and other industry insiders are gay. There are so many LGBT people in the industry that if you’re not accepting, it could potentially hold you back and harm your career. It was so eye-opening for me to see that.

We recently did a show at Stanford University and all three promoters were gay. It’s becoming more mainstream and I think we need to bring that more to the foreground.

Do you have any advice for young gay people living in a conservative environment?

It’s tough. It’s gong to take some time. I think that educating parents and family is really important. A lot of people just don’t understand what it’s like. I think parents are worried about their kids and the discrimination and bullying they might face. Education can help them know that everything is going to be OK. Even though everyone is going to make mistakes, pushing through the tough times is the most important thing you can do.

Build self-confidence to overcome rejection and ridicule. If you don’t love and respect yourself, you’re not going to get that back from everyone else.

But it really does get better.

Anything else you’d like to tell us about the show?

We’re really excited to put it on and be sure to come up and say hi after for the meet-and-greet. We’ll have merchandise for sale so you can support Poreotics in that way too.

I understand the venue where we’ll be is pretty big, so we want as many people as possible to come out and have a good time. Even if you’re not a huge fan of dance, come out for an evening of fun. If you do, I promise you’ll have a new respect for artists and dancers.

RuPaul is hostess with the mostess 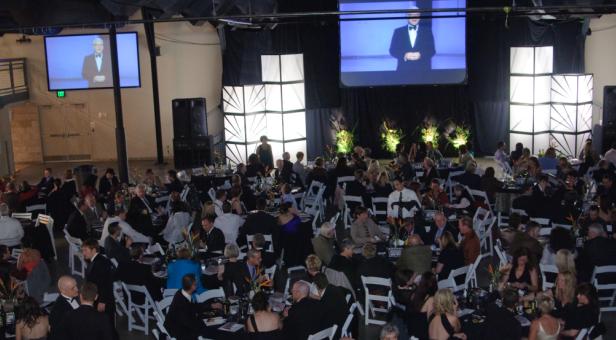