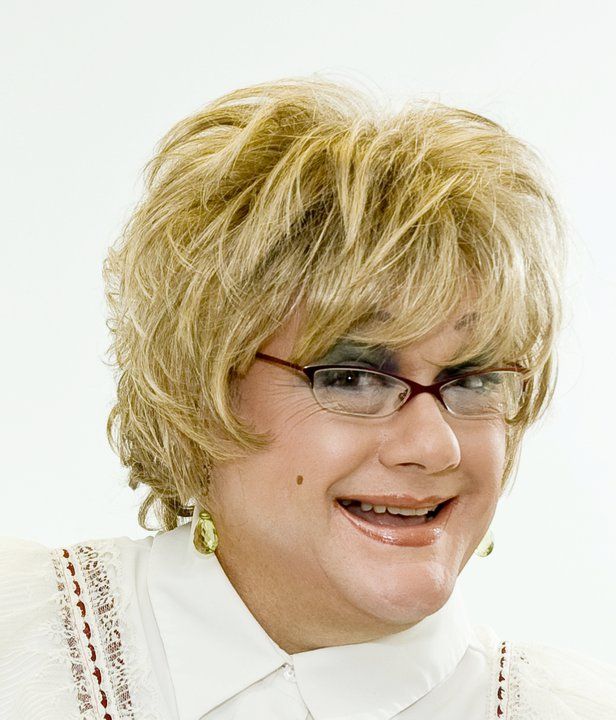 Charles Lynn Frost is an exemplar of reaching across boundaries. The actor, who’s well-known for his incarnation of Sister Dottie S. Dixon, is an award-winning thespian who describes himself as an unrepentant, liberal, queer-rights activist with a penchant for speaking his mind. He’s into leather, uniforms and staying well-informed through books and newspapers. Dottie, however, is on the opposite end of the scale; she’s more conservative, hyper-religious and she’s a woman. And she’s into big hair, homely dresses, and Jell-O.

“Dottie is the exact opposite of everything I am,” Frost said. “She is Mormon rural Utah and at the core, she’s based on my mama, with a few other inspirations.”

Developed as a part of a KRCL radio show called Now Queer This, Dottie is a Spanish Fork native who married after attending one year at Brigham Young University, and she has a gay son named Donnie. The segment was eventually canceled, but Frost was asked to participate as Sister Dottie in a video project for National Coming Out Day; the embodiment of the big hair, heavy makeup, buxom woman was born.

“Dottie embodies the love that Mormon mothers feel toward their sons. I wanted her to show that family comes first, no matter what,” Frost said. “I think there are other messages and goals, but Dottie’s main message is family unity above everything, and that’s something everyone can identify with.”

At first, no one knew who Dottie was, and many thought she was a real mother from Spanish Fork.

“Even my friends who saw the first video didn’t recognize me,” Frost said. “They were speculating about whether she was real or not. I think that allure is what draws people to her, in most cases.”

“My brother had just come out to me the day before. I was still unsure of how to behave around him. I was trying to be understanding and accepting, but it was so difficult,” Donald said. “I wouldn’t say that seeing Sister Dottie’s play made me totally understand why my brother’s gay. But I would say that it helped me realize that it doesn’t matter why he’s my brother and I’ll love him no matter what.”

Dottie served as the bridge between boundaries that Donald needed to love and accept her brother, she said.

“I think I was more intimidated by other things I saw on the news. It seems like whenever I see gay people on TV or the news, it’s the craziest, most outspoken individuals. That was so intimidating to me. Dottie was relatable, I felt comfortable with her and her message,” Donald said.

Donald, who is an active member of the LDS Church, is not alone in her admiration for Dottie; and Frost estimates that many of her fans are straight and religious.

“Why wouldn’t Mormons like her? She is them! She is their ambassador. She is a collective messiness of everything they are as a religion and people, especially rural Utah Mormons,” Frost said.

Dottie’s message, radio spots, and performances have launched her to local celebrity stardom, and in true Dottie fashion, she is a regular at worthy causes as a fundraising effort.

This year alone, Dottie has made appearances for fundraisers and drives at Moab Pride, The Ogden OUTReach Center along with co-host and X96 Radio from Hell’s Bill Allred, the Salt Lake Men’s Choir and the Youth Empowerment Summit. She also periodically appears on a segment called, ‘The Painful Circle’ hosted on X96’s morning show.

“We’re very careful to select worthwhile organizations and not to let people get tired of her,” Frost said. “But that’s tough, and I try to budget my time as best as I can.”

It’s fair to say that Dottie has taken on a life of her own and has even started to invade on Frost’s life. Half of his largest closet is dedicated to Dottie’s outfits and he estimates that she will soon be taking a hiatus so Frost can dedicate more time to his husband and grandchildren.

“My husband is very understanding. Not only does he support Dottie in all her many charitable outlets, he also supports me during the performances and helps with costume changes,” Frost said. “I just can’t believe how great he is and how lucky I am.”

The happy couple went to New York and was married on Sept. 15 and has been together for 10 years.

“I’m not afraid to take Dottie into new territory that might be a little more contentious. This time around, Dottie is going to be pushing for gay marriage,” Frost said. “Dottie’s also going to hit some new lows. It’s going to be tough for the audience, but it’s what has to happen for her to grow.”

The show, hosted by the Salt Lake Acting Company, runs Feb. 15-March 4. Tickets are selling fast and are available at saltlakeactingcompany.org.

“I’m so happy to see Dottie’s progression as a person. I hope that she continues to be a bridge and a conversation starter,” Frost said.

QSaltLake is proud to announce that the person of the year is Charles Lynn Frost, for his outstanding ambassadorship building connections between gay and straight, queer and family, and putting a smile on our faces while he does it.

As Sister Dottie would say, ‘We’re just sa proud of ya, sister!’

Utah Rebellion to harness its roots