The switch from a classically trained clarinet player to a Top 40 disc jockey at some of the hottest clubs in Salt Lake was a simple one for DJ Sergio V/.

“I’ve always been musically inclined. But it wasn’t until recently that I was introduced to house music and started to really love it,” Sergio V/ said. “I started learning in January of 2010 and it sort of consumed my life. Each week I spend hours preparing for my set.”

He uses the Billboard Top 100 and listens to various other deejays to prep for his regular nights as a frequently featured DJ at PÜRE at Club Sound, one of Salt Lake’s most popular gay clubs on Friday nights.

He got his start opening for DJ Mike Babbitt on ‘Blackout’ Thursday nights at JAM. His beats and reputation launched him into the resident Friday night DJ position at JAM and he began filling in occasionally on Saturday nights as well.

“I learned a lot at JAM. Every night is different and the Friday night and Saturday night crowds are like night and day sometimes. They’re completely different and a song that kills it on Friday might empty the dance floor on a Saturday,” he said.

Each set and each night is different and while there may be some predetermined direction of songs, Sergio V/ tries to let the crowd dictate a lot of the music and the request list is one of his most important tools.

The request list guides his set and pushes him to find ways to connect the dots between each song, which can be a challenge.

“I’m always thinking three or four songs ahead. I have to know how one song is going to lead into the next and make sure everything fits,” he said. “But finding the direction for the set to flow through the requests can be tough. I don’t just play each request immediately after I get it. I have to find a way to make it work.”

Another challenge he faces is blending his own darker, more brooding style into a top-40, more above-ground club mix. Finding just the right remix for the latest hit might take hours, but landing that perfect signature sound is worth the effort.

With inspirations and influences like Dave Audé, Tiesto, Paul Oakenfold, Thrill Seekers and many more, Sergio V/ has developed a unique sound that is unlike other deejays in Utah.

His stage name is inspired by his full name, Sergio Valentine Ramos, and his graphic design reflects his personal, unassuming but larger-than-life style.

“I would absolutely say performing is an artistic outlet. It’s awesome to have a chance to do something I love and share that. It can serve as a distraction from real life,” he said. “I was recently fired from a job because I’m gay, and while I’m still working on finding another, which is really tough, I’m so happy to have my DJ work to help.”

Sergio V/ has performed in Washington, D.C. for Capitol Pride at the Zigfeld’s/Secrets Complex during their pride weekend closing party. He also performs occasionally at PÜRE at Club Sound on Friday nights and has performed at other local gay clubs. To stay up to date on all his gigs, find DJ Sergio V/ on Facebook.

New student group focuses on a diverse No. Utah 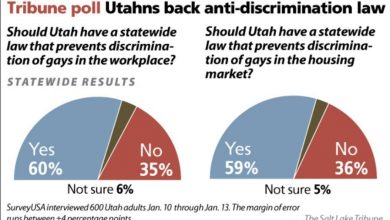