Did I mention I write in a park now? It’s organic and therapeutic until the old people and middle-school kids start 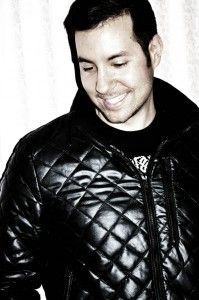 fighting over which homeless person smells the worst. Personally, I like the homeless people. There’s only one that pisses me off and that’s because he serenades me with a saxophone, taking a seat beside me each time I attempt to think. Who knew poor people could be so talented?

Wait. I’m poor. Oops. Let me restate that. Who knew the disadvantaged could be so amazing? Does that sound better? Good. I want to get in heaven and I already have the gay thing weighing me down. That’s why I try to see the best in people. Like in my friend Carey, who would have guessed him to be so crafty with a bowie knife? I would never have known if he hadn’t started a love affair with a beefcake bartender. I know, you’d think he’d know better. He is in the same field. I’m a bartender dating a bartender. The tale could never end well. But it would make for a good story.

So let’s flash back! Carey gets a dream job, slinging beer at a flashy downtown bar. Then he’s dating two, three, no four regulars at the same time. They each have a story, yet none of them is particularly tangible. There’s always some sort of scribble, a back story that’s never clear. One has cold balls. Another is an alcoholic. Another is a drug dealer. There’s always a glitch. But it’s attention that Carey craves, so he has his allowances. Besides, attention makes Jack, the beefy bartender, jealous. The problem is Jack shouldn’t be getting jealous. Why? Because Jack has a boyfriend. It’s just a little fact he forgets when he drinks.

He doesn’t really like Jack anyway. Well, unless they’re shitfaced, hooking up. Then he’s in lurrrve.

“It’s electric,” Carey explains, meeting me for sushi. Outside, the city is painted by jazz music, stringing lights. “It’s like he gets me. Like we have this connection.” Waiting on a table Carey romanticizes the situation. His eyes shine with insomnia. He picks at his bandaged hand.

He blushes, laughing it off. “Yeah…I um…pulled a skinning knife on Jack in the parking lot last night.” He looks off. “It’s funny, really.”

My limbs go still. “Are you serious?”

A host escorts us to a table while Carey explains it was a misunderstanding. He was filing a nail. It’s not his fault an argument broke out during a manicure in the front seat of his car. Besides, apparently it was cute. Jack sucked the blood from his wound. “Doesn’t that sound romantic?” Carey gushes.

“Why? I’m not diseased, you pervert!”

“Well some guys get off on that stuff.”

Behind a frown, Carey states he’s calling it quits anyway. He doesn’t want to be in a love triangle with Jack and his boyfriend. If only he could cling to that thought. You see, in no time, the two are back to their shenanigans except now Jack is flirting with other guys at the bar as well. Angry, Carey shoots me a text. “Can you believe the nerve?”

To which he replies, “I know. It’s bad. But you have someone. You don’t know what it’s like to be lonely, to hug yourself to sleep.”

I flash back, recalling the isolated confusion of being single — the long nights of writing my heart out, wondering if I’d ever love again. I wasn’t like Carey. Somehow I didn’t need four lovers to fill the void of one. In fact I hid, refusing to hook up with a single soul. Instead, I’d have play dates with fast friends, hosting emotional affairs. Who knows? Perhaps I didn’t do ‘single’ well either. Who does? Therefore I bite my tongue, trying to understand why Carey engages in such behavior. What is he getting from it? Would he still be interested if Jack were available?

To this day, Carey pleasures Jack when the opportunity arises. Then he shoots me a text, sensing it’s wrong. Perhaps it is. Perhaps it isn’t. Who am I to judge? As a friend, I’m just supposed to steer Carey down the path of being single even if that means admitting there might be more than one visible route.

What doesn’t kill you (makes you stronger)