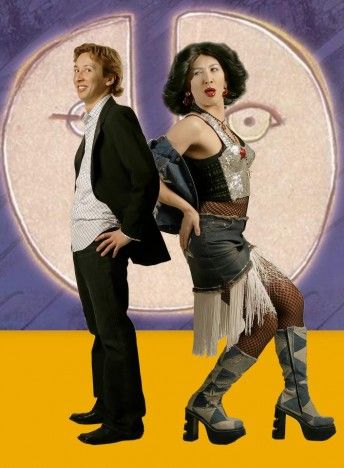 At the spry age of 25, Aaron Swenson first took on the lead role in Plan-B Theatre Company 2003’s production of the rock musical Hedwig and the Angry Inch, and while he was thrilled and, by his own admittance, terrified to play such an outrageous, multifaceted character, his main focus was on nailing down the music for that production. Today, however, the actor has grown as an artist and an individual — albeit he still looks 25. Using personal life experiences from the last decade is how he says he’ll channel Hedwig in this, Plan-B’s third revival being staged at Park City’s Egyptian Theater, June 8-17.

“I know more about myself that has helped me to now understand more about the story,” says Swenson. “You know, going back and re-reading the script there are things I didn’t quite get the last time around. The whole piece is so much about growing up. Before, playing the character was fun but really terrifying, and as much as I loved her I was also very worried about how much of myself I was seeing in her.”

Swenson goes on to explain that stripping away the layers of your past, all the things you put on yourself, and finding who you truly are underneath is the real story of Hedwig. “That’s kind of how the story goes. It starts out super tame and ends up stripped down almost completely naked, emotionally and physically. This time around I don’t think I will be afraid to strip that stuff back — the last time I was still hiding behind some stuff and this time I will not hide, you know, just leave it all on the stage.”

The musical is based loosely on writer John Cameron Mitchell’s childhood German babysitter/prostitute. When an East German rock musician named Hansel meets Luther, an American soldier, they fall in love and devise a plan to flee communist Germany. Hansel agrees to a sex-change operation and taking his mother’s name, Hedwig, in order to marry Luther. Unfortunately, the operation is about an inch less than a full success; and though Luther weds Hedwig and they move to small-town America, he eventually leaves her for another man.

Once she has recovered from the separation, Hedwig meets and falls for a timid teen named Tommy. They form a glam rock band and write music. But Hedwig is once again abandoned when Tommy steals her songs and becomes a successful rock star. Embittered and a little nuts, Hedwig follows Tommy on his tour, providing her own unique and, oftentimes, unruly concerts at much smaller venues while he performs nearby at larger arenas.

“Hedwig is a tornado, sucking everything to her center, just tearing everything apart as she goes,” says Swenson. “But she’s also incredibly charismatic so she’s able to get away with a lot of stuff because of her talent and charisma and her sort of sociopathic world view, in a way.”

Underneath it all, and more than just the nub, there’s a mistreated and misguided character who’s desperately finding her way in life.

“I get to insert my attitude into the character (of Hedwig) in terms of forgiveness because there are so many terrible choices that she makes, selfish choices and short-sighted choices — or genuinely making these big sacrifices that may not have been the smartest to do at the time,” Swenson says.

This story is about a universal need for self-forgiveness, Swenson continues to say. “The person that you are is going to emerge from the choices that you’ve made, and you have to forgive yourself for those choices; to step back and embrace and bless the situation.”

Director Jerry Rapier says that although Hedwig is one of Plan-B’s most successful productions in its history, he feels like the third time is the charm. “Doing a show this many times, we know what works and we also know what areas we can try something totally new; for example, in this production Aaron (Swenson) is also designing the costumes,” says Rapier. “There are also a couple of new band members.”

“However, and I cannot overstate enough the importance of Dave Evanoff’s (the musical director) participation in this show,” Rapier adds. “We should say first off that yes, for those that have seen the show before, Dave will be without his shirt again. But honestly, you can only do a successful rock musical with Dave Evanoff in this community.”

“People who have only seen the movie version, the big and important difference is that on stage you see everything through Hedwig’s eyes; all the characters in the movie we actually see through her because it’s really just her and the band on stage,” says Rapier.

Giving Swenson much-deserved kudos, Rapier finishes by saying, “There’s always one role that was made for a specific actor and this is one of those roles. There’s something to be said about a real skill to keep a show moving and on track and be true to the show while being able to ad lib within that framework, as Swenson does so well. This show is dependent on that, it’s scripted to have the freedom to banter with the audience. And make it sight specific.”

Pride around the globe