With more than 20 new-to-market stores opening and anchoring giants such as Nordstrom and Tiffany & Co., there’s plenty to excite the gay shopper at the soon to open City Creek Center in Salt Lake City. The 20-acre complex — complete with high-end retail, restaurants, and office and residential space, is a rarity of investment during a down economy. Normally, the gay dollars would be flowing through this retail magnet in Utah’s capital city, which opens March 22, but considering the financial backer and investment, will the queers turn out in droves to spend their hard-earned money?

The $2 billion project is an undertaking by Property Reserve, Inc., the commercial real estate division of The Church of Jesus Christ of Latter-day Saints. Investing in the area next to their world headquarters and Salt Lake City Temple, the LDS Church made the enormous construction project a magnet for economic boom and development, said Dee Brewer, marketing and sponsorship director of Taubman, the company managing the retail aspects of the mall.

However, an unscientific online QSaltLake poll indicated that a vast majority of readers do not feel comfortable shopping in the new mall because it’s owned by the LDS Church. Of the more than 100 responses to the survey, more than 70 percent said they will not shop at City Creek Center. Approximately 9 percent of respondents said they are excited for the opening of the mall; another 9 percent indicated they will shop there but only because the stores are not in other non-Mormon-owned malls and 11 percent said they are undecided.

The retail outlets of the mall will be operated by Taubman Centers, which runs more than 20 malls around the country. Taubman has no affiliation with the Mormon Church and encourages queer shoppers to visit their properties, Brewer said.

“First and foremost, City Creek Center is for everyone,” Brewer said. “We can’t wait to open the doors for everyone and we are very excited to have gay and lesbian shoppers visit. I’m sure they’ll love the new stores we have to offer Utah and I can assure that they will feel welcomed and comfortable.”

Gay and lesbian couples will not have to worry about breaking any rules or regulations of the mall if they hold hands while perusing the shops or even if they share a kiss, Brewer said.

“There is no difference between how gay and straight couples will be treated and City Creek will follow the same stipulations that other Taubman properties use. There are no different rules and the LDS Church will not be influencing any of the rules or regulations,” Brewer said. “It’s not just gay and lesbian shoppers who were concerned about visiting City Creek but we want to make sure everyone is aware that they are welcome.”

Despite having a middle-management company between the shoppers and dollars going directly to the LDS Church, many Utah gays and lesbians are still voicing concern. The Mormon faith does not allow gays and lesbians to date or marry. While the checkered and difficult past includes a changing of doctrine, the current stance is that gays and lesbians should remain celibate and attempt to change their sexuality to fit cultural norms whenever possible. The Mormon Church also became embroiled in scandal when leaders encouraged members to donate time and money to a campaign to ban gay marriage in California.

“I vote with my money. I do not shop at a facility that contributes or donates to advocating government force that is used against another group of individuals,” said one poll participant.

“I don’t have a problem shopping at places owned by Mormons, however, I will not shop at a place owned by the Church itself because I don’t want my money going to the Church so they can pull the same shit they did during prop. 8,” said another.

With other high-end and local retail shops around the city, it appears likely that many Utah queers will spend their dollars elsewhere.

However, many of the companies that will be opening in City Creek Center offer comprehensive nondiscrimination policies and domestic-partnership benefits. The Human Rights Campaign’s Corporate Equality Index, which grades companies on treatment of queers, has given perfect scores to some of the businesses opening in City Creek. Nordstrom received a 100 percent score, even offering transgender-inclusive health care policies. Macys and Tiffany & Co. both received 90 percent scores. Jewelry retailer PANDORA was not graded by the HRC, but it requires employee sensitivity training and operates under a self-imposed nondiscrimination policy.

“As part of this commitment we have made a pledge to advancing responsible business practices within human rights, sound working conditions, environmental issues and business ethics. Thus, we have issued a set of mandatory polices that all PANDORA employees are required to follow and we constantly encourage all business partners to take up similar procedures,” a company representative said in a statement.

Poll responders cited various reasons to avoid the new center and while ownership was a large concern, there are others who are concerned about shopping locally and sustainably. Despite individual companies within the mall and the operators of the retail stores, many Utah queers have promised to shop elsewhere. And while overly broad definitions of where queers will shop are speculative, it seems that Utah queers view the situation at City Creek Center as unique. 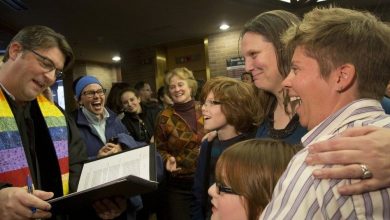