Openly gay, indie-pop singer-songwriter Tom Goss, 29, is a man who has certainly had more than a fair share of ups and downs. How he interprets them through his new album systematically cradles on a peaceful plane enveloped by an ominous sky. Having been faced with a seizure disorder and an alcoholic parent as child, and later with his homosexuality, Goss’ journey into manhood had the potential for disaster; in fact, it came close, but he rose above it, thanks in part to a guitar and the love of his life. 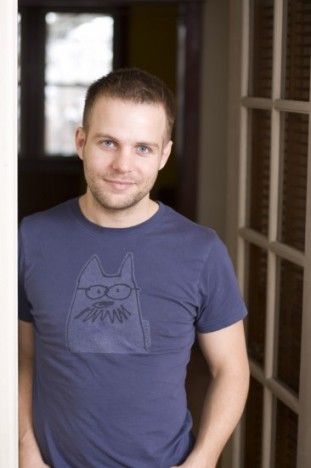 In this second interview with QSaltLake since 2009, there’s seems to be, on the surface, little play to who he is today as a man. (He says during the interview that he’s taking steps to be the man he hopes to be.) His music and approach to the world suggests he’s a man with great confidence, an empathetic heart and a soul humbled by its history; it would be hard to debate a better outcome.
Goss returns to Utah, May 8, in support of his fourth album. When I spoke with him in 2009, he had just become engaged. Here, he shares a little about his marriage, what inspired the tracks on his new album and an evermore yearning.

The new album is called Lost Songs and Underdogs — will you elaborate on the context? Do you see yourself as an underdog?

Absolutely. However, in this context, underdogs refers to the songs more than it does to me. These songs, for the most part, are songs that didn’t fit on my other albums. I love writing bright pop music. I love writing love songs. On this album a lot of the songs are darker, more sparse. They deal with sensitive issues from my past, divorce, infidelity, suicide, death and alcoholism. It’s definitely not a bright pop record. In a way, I do suppose that these songs are from a time when I was more of an underdog as well. This album is so different for me; I was curious as to how folks were going to respond to it. Luckily, like all my work, it’s honest, real, and works to connect with each individual on a deeper emotional level. It seems to be doing just that.

I like the logistic predecessors (written on the album’s insert) to each track on the album. Referencing “Me and My Dinosaurs” you say, “I loved to think of the innocence I once had, where all that is magical can be real: God, dinosaurs, monsters and even Santa Claus. As we gain experience we grow bitter, realizing that these things aren’t real.” You grew up Catholic and, at one stage in your life, was prepping to become a priest; what, besides bitterness, specifically directed the 360 in your direction?

I’m definitely not bitter. In a lot of ways that’s the point of the song. By the time you get to “Me and My Dinosaurs” on the disc, you get a snapshot of my life where it would seem to be the logical conclusion that I might be bitter, but it’s the opposite. I speak of these things simply as realities. This is what happened, this is what made me who I am. I love who I am, I wouldn’t trade any of those negative experiences for anything. They have made me more compassionate and empathetic, more understanding and caring and most of all, stronger. “Me and My Dinosaurs” ends with the lyrics “but I refuse the failings of my past, to learn a jaded laugh, like all the other fools. Cause my truth, lies in my youth and those silly games. Me and my dinosaurs.” I’m always working hard to embrace innocence, and seeing my faults and hardships for what they are — just another step in becoming the man I hope to be.

“Summer of 1994” is a heartfelt kiss-off, if there’s such a concept, to suicidal inclinations. To what do you attribute to writing this song? I mean it’s been over 15 years since your attempt, right? So, why write about it now?

That’s an interesting way to think about it. I haven’t thought of it as such. I mean, there is so much youth suicide in the news these days that it’s hard not to think about why. In addition to all that which makes the news, there was a scare with someone very close to me. It kind of sent me backward in my head as to why? What could someone be facing that’s so hard that they would want to take their own life?

I could tell you the reasons why I wanted to, and eventually tried, but only from a distance. When you’re 15 years beyond that point it’s hard to feel what you used to feel. However, in order for me to be more open and honest about it, I felt I needed to try to get back to that point in a way that opened a dialogue with others. That song has already begun to make a difference as a result. I’ve heard stories from adults and youth alike, all over the country, that are finding solace in that song. In the end, the song is written more to teach the youths that are contemplating suicide, and much less about being a heartfelt kiss-off to my own experience.

You are lyrically poetic … and somewhat intense. Your music, to me, feels sermonic. Is this a byproduct of your seminary days?

Hahahahahaha, I don’t know! I mean, that’s not my intention, but I definitely try to sing about hope and redemption. I think a lot of times the music industry gets it wrong. There is so much power in music and lyrics, why waste them on bragging about how cool you are, trying to sell shoes or liquor or talking about sex all the time. I think that people are yearning for something deeper. I know that I am.

You’ve been married now for what, three years? Is, as the saying goes, the honeymoon over? How has your relationship with Mike changed since tying the knot?

Not really. We’ve been together going on seven years and we were living in sin long before we were married. I think in our hearts we were married to each other within six months of getting together. We’re crazy about each other, so much so that people tease us. People are always like, “Oh yeah, just wait, it gets boring… blah, blah, blah.”

We don’t live life like that. We cherish and respect each other, enjoy each others company, find each other irresistible, are sensitive to each others needs and most importantly, we communicate. I mean, how many love songs have I written about him? I wrote a new one last week!

Mike’s sick at home right now and it’s driving me crazy that I can’t make him soup and take it to him in bed. We have a real connection and I’m so lucky.

What do you like most about Salt Lake City? Do you have plans to see the Mormon Temple or shop our new multimillion-dollar City Creek Center while you’re here? (Apparently, The Cheesecake Factory is the new hotspot in downtown Mormondom.)

I love Salt Lake. I’m excited to be back in a couple weeks. What I love more than anything is the people. Everyone is so friendly, it’s refreshing. You can’t argue about the scenery either, it’s pretty stunning! As for The Cheescake Factory? I’ve never been to it in SLC but I doubt I’ll go. I much prefer to stick to local stuff, get a taste of the local flavor.