Utah Sen. Orrin Hatch has called for an investigation on the possibility an Internal Revenue Service employee improperly disclosed of the National Organization for Marriage’s confidential donor information.

Hatch, the ranking member of the Senate Finance Committee, wrote IRS Commissioner Douglas H. Shulman Tuesday that “evidence suggests that the IRS may have been the source of the unauthorized disclosure of donor information.”

NOM is considered a nonprofit organization by the IRS, founded in 2007 as an organized opposition to same-sex marriage in state legislatures.

“NOM’s charges of illegal conduct by HRC are absolutely false,” the group said in an earlier statement

A matter has recently come to my attention that raises serious concerns about the procedures providing for security and confidentiality of information filed with the Internal Revenue Service (“IRS”). This matter demands your immediate attention.

As reported recently in the press, the National Organization for Marriage (“NOM”), a nonprofit tax exempt social welfare organization under Section 501(c)(4) of the Internal Revenue Code, believes that the confidentiality of information furnished to the IRS has been disclosed without authorization. Specifically, evidence suggests that the IRS may have been the source of the unauthorized disclosure of donor information from NOM’s 2008 Form 990 Schedule B (“2008 Schedule B”), which was obtained and published by the Human Rights Campaign (“HRC”) and the Huffington Post. The unauthorized public disclosure of return information is strictly prohibited by law, and appropriately treated as a serious crime, punishable not only with loss of employment but with imprisonment. See 18 U.S.C. 1905.

The information that has come to my attention regarding the unauthorized disclosure of NOM’s 2008 Schedule B donor information is disturbing. That document includes a list of the donors to NOM who have contributed $5,000 or more during the reporting period. Both NOM and its donors had reason to expect that the donor information on the 2008 Schedule B would not be publicly disclosed without authorization. NOM filed the 2008 Schedule B pursuant to 26 U.S.C. 6033, and disclosure by the IRS of the names or addresses of contributors to NOM is not authorized. See 26 U.S.C. 6104(b).

NOM is required, pursuant to 26 U.S.C. 6104, to make the public portions of its Form 990, those that do not include confidential donor information, available for public inspection. It is my understanding that HRC has published NOM’s public Form 990 for both 2009 and 2010 on its website. Yet those public 990s differ in critical ways from the 2008 Schedule B at issue here.

The public 2009 and 2010 forms do not include confidential donor information. Moreover, unlike the 2009 and 2010 public 990s, the 2008 Schedule B published by HRC and Huffington Post is a PDF document that appears to have been deliberately altered in a manner to obscure information that would identify its origins with the IRS. First, the 2008 Schedule B appears to have been cropped in order to hide a stamp appearing across the top of each page that states, “THIS IS A COPY OF A LIVE RETURN FROM SMIP. OFFICIAL USE ONLY.” Second, a white rectangle appears diagonally across the middle of each page of the document at issue — a redaction that hides a number that appears to have been generated by the IRS.

The possibility of an unauthorized public disclosure by the IRS of NOM’s 2008 Schedule B donor information is a matter that I take with the utmost seriousness, and I expect that you will treat this inquiry with the attention that it deserves. Violations of the statutory protections accorded confidential return information threaten the mission of the IRS. Our political history shows the absolute necessity of maintaining the nonpartisan integrity of the IRS. The proper administration of the nation’s tax laws requires confidence that the personal and confidential information filed with IRS will not be improperly disclosed or used for political purposes.

I request that you update my staff by May 29, 2012 regarding the actions you are taking to investigate this matter. Given the potential commission of a crime in this case, I are copying the Attorney General on this letter and expect that he will provide you with any assistance that you need in getting to the bottom of this matter. 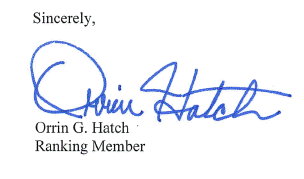