The road to Pride is fraught with danger and excitement.

There are two real dangers of marching in the Pride Parade.  First, the driver of the float following me could be dazzled by the sunshine glinting off of my sequined gown, thereby being blinded and running over the top of me.  My only hope would be that it was a float full of Speedo-clad go-go boys.

The second and most dangerous outcome of marching in the parade is that I might fall off my heels and break my delicate ankle.  Naturally, the handsome motorcycle cops in the tight, tight pants would rush to my aid, urgently trying to determine the least disruptive way to bring a crane in and lift my motionless immensity from the street and into a dump truck. Much to my chagrin, Salt Lake’s finest would be confused by the proper course of action from the gathering hordes chanting “Put her down, put her down,” as if I were the race horse Barbaro who shattered her leg at the Preakness and had to be “put down” as a result.  Placing these fears aside, I gladly march “onward, ever onward.”

I recall that last year during the parade, as I was promenading down the street in my finest crinoline skirt, cotton candy-pink beehive hair, twirling bosoms and a fuchsia sequined cape, a reporter asked why I was there.  I replied with something about the excitement of the event, gathering with like-minded folks and enjoying the diversity of the community.  Over the course of this last year I have been pondering more deeply my answer to that question.

Why do I march in a Pride parade?  Just what is it that I am “proud” of?  Is the fact that I occasionally like to “take it up the bum” an adequate reason to march in a parade?  Is the detail that I enjoy looking at a scantily clad, hard-body men reason enough to ride a float?  I hardly think so.

I looked up the definition of pride in the dictionary.

Having or showing self-respect or self-esteem.

A satisfied sense of attachment toward one’s own or another’s choices and actions, or toward a whole group of people, a product of praise, independent self-reflection, or a fulfilled feeling of belonging.

Historically, society called us unnatural. The church calls us sinners. Our families cast us out. Government treats us as second-class citizens. The medical profession called us sick. Literature called us the “Love that dare not speak its name.”  Bullshit!  I dare speak its name!  In my case his name is Kelly.  He is the love of my life and damned be anyone who attempts to subvert, denigrate, deny it or try to separate us.

So, there it is!  Pride is not to celebrate my sexual proclivities. Pride for me is the rejection of the negative, sinful attributes and shame with which society has tried to label me.  I include in this the negative comments even from within the gay community.  I recently felt it necessary to cast aside a young, gay man who stated that older, heavier gay men should just go away and die. I will not give such insensitive uncaring people any power or influence over my life.

My strategy is thus:

Name it —  Don’t accept negative labels “THEY” try to assign to me.  Call things as they rightfully are.  I’m not a “sinner.”  I am an equal child of god, and we disagree about definitions.

Claim it — Own my identity.  Yes I am gay, queer, fag, queen, pansy, fairy, homo, friend of Dorothy and I’m fabulous! Like there was anything wrong with that.

Tame it — Learn to be the best damned fag I can be. In my case that’s going to mean learning how to sew.  These sequin capes just don’t grow on trees you know.

Frame it — Take charge of how I present myself to the world — don’t let others force me into their preconceived stereotypes.  I think I just might run out of sequins and rhinestones.  Believe it or not, but when I’m not marching in a parade, I’m a truck driver.

Pride for me is to stand up in public, in front of God and everybody and claim my rightful place as a citizen, equal to all and inferior to none. “THEY” do not get to define me, that’s my job.

A tale of the pit and the pendulum 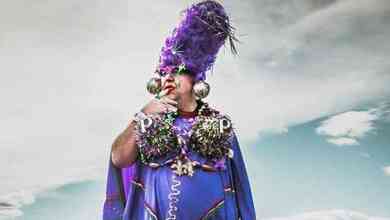