[dropcap style=”font-size: 60px; color: #9b9b9b;”] W [/dropcap]hile official numbers are not yet in, around 5,000 people in nearly 120 entries marched along Second South in the Utah Pride Parade and an estimated 30,000 partied on Washington Square in downtown Salt Lake City at the Utah Pride Festival.

This year’s parade made national headlines as over 300 current and former members of the Church of Jesus Christ of Latter-day Saints followed Utah Pride Parade Grand Marshal Dustin Lance Black at the head of the procession.

“Nearly 300 Mormons marched in a gay pride parade on Sunday, holding signs that read ‘”God Loves His Children’ in a unique display of support from believers of a religious tradition that has long opposed homosexuality,” a story by the Reuters news agency started.

“More than 300 Mormon church members who are not gay drew shouts of approval and tears from spectators while marching in the Utah Gay Pride Parade in downtown Salt Lake City. The Mormons say they sought to send a message of love to Utah’s lesbian, gay, bisexual and transgender community by joining the annual parade Sunday,” the Associate Press wrote.

Erika Munson, an LDS mother of five, started Mormons Building Bridges as a Facebook group several weeks ago. She was, at first, trepidatious over what the reactions of the crowd lining the streets would be. At a parade organizational meeting a few weeks ago, she brought her concerns to the organizers and was assured the most likely response would be overwhelmingly positive. And it was. LDS marchers watched, and sometimes hugged, people alongside the route crying, saying ‘thank you’ and otherwise showering love right back at them.

Many other organizational groups such as the QUAC Aquatics Club, Salt Lake Cheer and the Utah Gay and Lesbian Chamber of Commerce, businesses such as Zions Bank, Prestman Auto and Wells Fargo and Salt Lake’s gay and lesbian bars joined the parade. Many people were dressed in colorful outfits, many in very skimpy outfits, and some in full Sunday attire.

The pace was swift, as city officials put a 90-minute cap on the parade. Police were getting antsy as that mark was approaching and many more entries were still queued, waiting to enter the route.

“We are pushing the 5,000 people through as quickly as we can,” parade director Logan Brueck told an officer.

Thousands made their way down to Washington Square to enjoy the year’s first 90-degree, sunny day to enjoy the entertainment, visit the hundreds of booths, dance and quench their thirst. Festival-goers were unanimous in their appreciation of short beer lines, a sticking point at past events.

Organizers said only very minor incidents were reported through the 2-day event.

Parade award winners will be announced in the next few days and a full wrap-up will likely be released in a few weeks with final numbers, such as attendance and what income the Utah Pride Center received for all of its work to help run their projects through the year.

In the end, though, festival and parade attendees seem to be giving a chorus of “job well done” to organizers and volunteers. 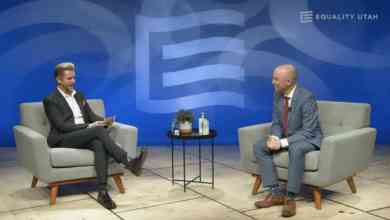