It’s almost inconceivable that a man of 68 years, born and raised in a conservative Christian family, and whom he says was once a typical conservative and segregationist (of the time) – having been mentored by, and hobnobbed with, Jesse Helms – could today be considered a pioneer in bringing homosexuality into mainstream literature and, in contrast, gay activism. Author Armistead Maupin, a fine and benevolent storyteller, will be in Salt Lake City, June 23, to read and discuss the next chapter in the Tales of the City series, The Days of Anna Madrigal.

It wasn’t until Maupin was close to 30 years old that he decided to come out as a gay man, and during that same period he began writing a serial column for a San Francisco newspaper that eventually blossomed into a series of novels involving a mishmash of colorful and unforgettable characters, both gay and straight, living in San Francisco. Over the following 35 years, Maupin’s books have been translated into several languages, and today there are over six million copies in print.

Maupin, a veteran naval officer, is married and lives in San Francisco with is husband Christopher and their dog Philo. You can find Maupin on Facebook, and for more info visit armisteadmaupin.com.

Armistead Maupin will be at the King’s English Bookshop, June 23, 7 p.m. to read from his new novel and speak to his LGBT activism, life and work.  Tickets are $25, with percentage of the proceeds benefiting The Trevor Project. Tickets are available at kingsenglish.com. 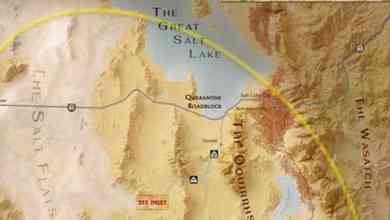