A few issues back I mentioned I was planning a trip to a rural community outside Omaha, Neb. Well, I’m happy to report I’ve returned home unscathed. Other than several times a day having to frisk myself for ticks and bearing witness to a live, bloodied game of whack-a-mole, it was really quite peaceful. My friend Jeremy, the actor-turned-chicken farmer, and I played Pick up Sticks, fished the Platte River off his airboat, which he boastfully named ‘Cocks in the Corner’ … don’t ask! and spent many hours bird-watching like a pair of old coots. It was delightful. Jeremy and Jeff’s property is quaint and cozy. I love the bathtub-turned-flowerbed and the Wizard of Oz-themed outhouse (although, I don’t recall duckies and dinosaurs in the land of Oz … maybe there’s a clodhopper version). Thank you boys for showing me a unique (but not subtle) way of life. Go Cornholes!

22friday Grammy-winning country/pop artist k.d. lang is slated to take over West Wendover tonight. The Canadian-born songstress has garnered an impressive career and mainstream success, especially among lesbians and, what I’ve come to term, “lesboyans.” With such classic hits as “Constant Craving,” “Miss Chatelaine” and “Trail of Broken Hearts,” this should be a wham-bam-thank-you-mam good time.
8pm, Peppermill Concert Hall, 680 Wendover Blvd., W. Wendover, Nev. Tickets $30–80, 866-820-4553 or wendoverfun.com.

According to a reliable source, there’s a lot of gay buzz (and you know how loud that can be) around breakout actress Greta Gerwig. Her role in Damsels in Distress has left the homos twirling in their tiaras. Her latest flick, Lola Versus, is about a sweet, needy, neurotic girl who, days away from being married, is dumped by her fiance (the sexy Swede, Joel Kinnaman). In retaliation of sorts, Lola turns a wee bit promiscuous … please, we’ve all done that — it’s therapeutic and well, a lot of fun to watch. The superb Debra Winger co-stars.

23saturday  Even if you’re not much of a bookworm, this incredible opportunity to meet and converse with one of the most well-known and acclaimed gay authors, Armistead Maupin, is bound to be riveting and memorable. Maupin’s signature claim to gay fame is his Tales of the City series. He is in town to share a sneak peek into the next chapter in the Tales series, The Days of Anna Madrigal, which will be released next year. He will also speak to his LGBT activism, life and work. A percentage of the ticket proceeds will benefit The Trevor Project.
7pm, King’s English Bookshop, 1511 S. 1500 East. Tickets $25, 801-484-9100 or kingsenglish.com.

24sunday  The Utah Pride Center is thrilled to present the inauguration of their new program, UP365, aimed for, but not limited to, LGBT community members age 21-40. Join and support the Center today for free food and drinks, great entertainment, and great people! UP365 is a program of the Utah Pride Center Jr. Board, and hosts a variety of monthly social events and service projects, 365 days a year.
4–6pm, Gallivan Center, 239 S. Main St. Free, 801-539-8800 or utahpridecenter.org.

26tuesday Utah native and indie pop vocalist Dia Frampton performs in Salt Lake tonight supporting her first solo album Red, on which she wrote or co-wrote all the singles. The 24-year-old songstress is cute as a button on a bow tie! You know, it seems to me that born-and-bred Utahns have a certain look about them: a sort of innocent, naive and, can I just say, boring aura. Dia’s no different at first glance, until I heard her music … wow, she’s conceptual, progressive and unique! Plus, sometimes she uses a cowbell – how unusually fabulous is that?
7pm, The Complex, 536 W. 100 South. Tickets $16 adv/$20 day of show, 801-467-8499 or smithstix.com.

I’m kind of a fan of mushy, romantic ballads, so I too may seem to have a boring aura, and I’m OK with that … I make up for it with odd senses of humor and sexual practices. Anyhoo, I became smitten by the boys of Keane when I first listened to their ballad “Somewhere Only We Know.” Having cited artistic influences of REM, Rufus Wainwright, Queen and A-ha, it’s no wonder this English alternative rock group hold a special place in the hearts, and other pulsating organs, of so many gay men.
7pm, Gallivan Center, 239 S. Main St. Tickets $30, 801-467-8499 or smithstix.com.

27wednesday  For 34 years, the Salt Lake Acting Company has made Utahns from all over the state laugh their asses off with their signature politically-driven musical satire, Saturday’s Voyeur. This year, with a theme of “The Mormon Moment,” there will be five life-affirming discoveries that they will share with us all: 1) How to be a Latter-day gay; 2) What happens when you choose to be a Democrat in the LDS Church; 3) What happens to Mormon girls who kiss girls; 4) Why the Eagle Quorum has so much power on the Hill; and 5) Why Mitt Romney’s tithe makes the world go around. Hey, I just had one of those rare light-bulb moments — add Saturday’s Voyeur to the Utah education curriculum. Lovin’ it!
Times vary, through Sept. 2, Salt Lake Acting Company, 168 W. 500 North. Tickets $35–55, 801-363-SLAC or saltlakeactingcompany.org. 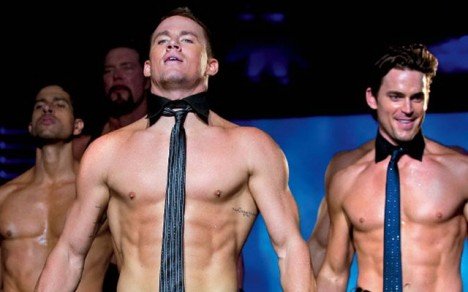 29friday For all the boys who loooovvve boys, there’s a new skin flick opening up, sure to make tongues drop and nipples hard. A dramedy set in the world of male strippers, Magic Mike, stars the melts-in-your-mouth Channing Tatum, and is inspired by his real life … oh my!! The film follows Mike (Tatum) as he takes a young dancer called The Kid (Alex Pettyfer) under his wing and schools him in the fine arts of partying, picking up women and making easy money. I know, I should be considering the merits of the movie, not the number of wet dreams it will conjure, but I’m OK with that. The bounty of beautiful bods include Matt Bomer, Matthew McConaughey, Joe Mangianello, Cody Horn, Adam Rodriguez and Riley Keough.
Opens today, go to fandango.com for participating theaters and showtimes. Tickets $6.25–8.75.

5thursday  OMG I feel like a 13-year-old girl struck by the arrow of Justin Bieber, but in my case it’s the shafts of Foster the People. Yes, I’m a tad outdated to be so titillated by these boys, but I’m OK with that! The indie pop group have been nominated for several music awards including two Grammy Awards. Their hit single “Pumped Up Kicks” has been nominated for seven music awards and won two. Guest performances by Kimbra and Mayer Hawthorne & The County.
7:30pm, Saltair, 12408 Salt Air Dr., Magna. Tickets $28 adv/$30 day of show, 801-467-8499 or smithstix.com.

Like every other concert diva documentary, Katy Perry: Part of Me, will probably be full of drama, costume malfunctions, gay male dancers throwing hissy fits and kisses at the same time, sparkling brassieres and the Betty Ford Clinic on speed dial. But at least this one’s in 3D. Honestly, I really like Katy and I think she has a lot to offer the world, so I’m hoping this film won’t be a bust.
Opens today, go to fandango.com for participating theaters and showtimes. Tickets $6.25–8.75.

6friday Dark Horse Company Theatre presents Chicago, a universal tale of fame, fortune and all that jazz with one show-stopping song after another. This multiple Tony Award-winning musical has also been winning the hearts of Americans for years; and it was made into a movie in 2002, which won the Academy Award for Best Picture. So, you know it’s gonna “Razzle Dazzle.”
8pm, through July 29, Egyptian Theatre, 328 Main St., Park City. Tickets $30–60, 435-649-9371 or parkcityshows.com.

14thursday  With conductor Brent Havens and guest artist James Delisco, the Utah Symphony presents The Music of Michael Jackson. Havens has written music for orchestras, feature films and television. He has worked with some of the world’s greatest orchestras including the Royal Philharmonic in London. As with this show, Havens has been arranger/conductor of several symphonic rock programs that celebrate industry legends like Queen and Led Zeppelin. Delisco is an iconoclastic showroom performer with arousing energy, and he emanates old-school charm with contemporary charisma.
7:30pm, Deer Valley Snow Park Lodge Amphitheater, 2250 Deer Valley Drive S., Park City. Tickets $60–85, 801-355-ARTS or arttix.org.

18wednesday Arguably the most beloved musical of our time is returning to the Capitol Theatre stage after three years. Wicked, based upon Gregory Maguire’s acclaimed novel, exceeds expectations as it unfolds the never-before told tale of the legendary witches in the land of Oz. There’s nothing like two old friends beating each other down, then turning around and picking each other up. Of course they do it with eye of newt, broomsticks and glitter … no wonder homos love it!
Times vary, through Aug. 26, Capitol Theatre, 50 W. 200 South. Tickets $100–195, 801-355-ARTS or arttix.org.

Pride, Heels and ‘Ride Me’

Ani Gets Raw After Dark on 42nd Street