Jennifer Tyrrell, a gay mom who was removed as a den leader by the Boy Scouts of America, will deliver 300,000 petition signatures on Wednesday to the Boy Scouts of America’s national headquarters, calling on the Scouts to reinstate her and end their policy prohibiting gay scouts and scout leaders. Jennifer will be joined by her family, including 7-year-old Cub Scout son Cruz.

Tyrrell started her first petition on Change.org after being told on April 10 that she could no longer serve as den leader for her son’s Cub Scout Pack because of her sexual orientation. Since then, more than 300,000 people — including thousands of scouts, scout leaders and former scouts — have signed her petition, urging the Boy Scouts of America to reinstate her and to end their policy banning gay youth and leaders from serving.

Tyrrell’s campaign recently convinced another Boy Scout board member, Ernst & Young Chairman and CEO James Turley, to publicly oppose the organization’s ban on gay scouts and leaders. Turley announced last month that he intends to “work from within the Boy Scouts of America Board to actively encourage dialogue and sustainable progress” on ending the ban on gay scouts and gay scout leaders. Tyrrell has also collected more than 75,000 signatures on a petition to AT&T CEO Randall Stephenson, rumored to become the President-elect of the Boy Scouts of America Board of Directors. AT&T is also headquartered in Dallas.

“All I’m asking for is the opportunity to resume my post as den leader of my son’s Cub Scout Pack, a post that was taken from me as a result of a discriminatory policy that’s unpopular with Boy Scouts and leaders across the country,” said Tyrrell. “I’m looking forward to engaging the Boy Scouts of America directly so I can share not only my story, but the stories of the more than 300,000 people who have signed my Change.org petition.”

Tyrrell’s campaign has earned the support of numerous celebrities as well, including Julianne Moore, Benicio Del Toro, Josh Hutcherson, Ricky Martin and others, and Tyrrell has been featured at the GLAAD Media Awards in Los Angeles and San Francisco for her work to end the Boy Scouts’ ban on gay scouts and scout leaders. She most recently marched in the 43rd Annual LGBT Pride Parade in NYC with GLAAD as well as actor and former scout leader George Takei. 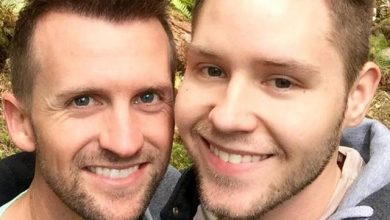