Vagina. That’s the first thing to come up during my recent interview with Gina Gershon, who goes full-frontal as Sharla in the awesomely twisted Killer Joe.

The actress plays a trashy two-timer who gets caught in the middle of a family’s murder plot when they hire a hit man (Matthew McConaughey) to take out their mother to collect the life insurance money. Just minutes into the movie, and there she is – all of her.

We got Gershon on the phone to chat about her crotch coat, the agent that almost stopped her from playing a lesbian in one of her most lady-loved films and why she really wishes that she was gay.

Are you sick of talking about your vagina yet?

You mean my merkin? I never get tired of talking about my merkin.

Did you name your merkin?

Yes, I believe I was calling my merkin Bertha – a big, heavy-set merkin. Make room for Bertha! She’s ready for her close-up.

This isn’t the first time you’ve been part of a movie that was rated NC-17. Do you think the MPAA has been fair to the movies you’ve starred in?

Listen, I think the whole rating system is unfair. It’s just arbitrary and there’s no consistency and I find it fairly ridiculous. I mean Showgirls was NC-17 – why? I’m still not really sure. I guess there was a lot of nudity. And in this country if you cut out a boob, it’s rated PG; if you just show them, then they’re sometimes NC-17. Bound was going to be NC-17 because that love scene was very intense and very beautiful and didn’t show anything of Jennifer (Tilly) or myself, but it was too much of a love scene so we had to change it. Once it was more of a fucking scene then they were like, “Yeah, that’s OK.”

You can get away with full-on sex but you can’t show lesbian love?

It seems a little bit strange to me. I don’t quite get it. Of all of them, Killer Joe probably should be NC-17 if we’re going by an NC-17 rule, which in Europe they don’t have. I forced my parents to take me to see The Exorcist at 11. I was completely enthralled and so excited; my mother was mortified. Had I been a different 11-year-old, I might’ve been completely traumatized. So it’s up to the parents and the kid to know what they can and can’t handle.

To me, it’s a hardcore movie, and I think people should know going in. It ain’t a Disney film! That being said, and because of this system, I’m really respectful and completely behind (director) William Friedkin in choosing not to change a frame. He’s earned the right to make the film that he wants to make – and god bless him for it. I think it’s great. It’s just a bummer that it’s harder to roll out. It can’t show in as many theaters, but I think word of mouth is getting out. People who want to see this film are going to see it.

With Bound, your agent told you at the time that playing a lesbian role would ruin your career. But you did anyway. Why did you take the role of Corky despite your agent’s advice?

Because it was a great role. The hero stories were always men – they got the money, they got the girl, they got away with things. When I read this movie, I was like, “Wow, I get to be the hero.”

I’m really proud that I did that film. And so what – at the end of the day, I got new agents. They literally said, “We can’t represent you if you do this,” and I said, “OK, here’s your commission; I’m doing this film.”

So it was worth the sacrifice?

Yeah, it was actually.

Do you think actors are still being told to avoid gay roles?

No, man. The gayer the role, they’re like, “Do it! You’ll get nominated for an Academy Award.” That just goes to show how far we’ve come. Before it was going to ruin your career. Not anymore.

Are you currently looking at any gay roles?

I don’t look at roles if they’re gay or straight or young or old or black or white. I just don’t distinguish roles like that. I look to see if I can relate to what the character is going through or if I like the whole story and if I like the director. I like colorful stories. 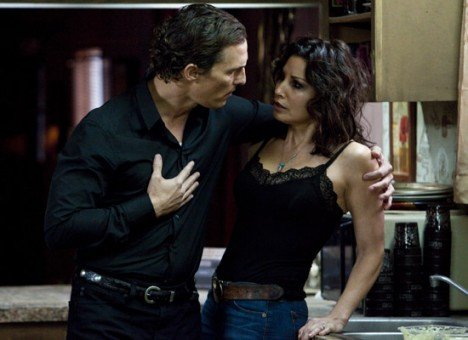 Your co-star in Killer Joe, Matthew McConaughey, is also in another recent movie, Magic Mike, as a stripper. As a dancer in Showgirls, did you approve?

Wasn’t he great? He was so great. I’m so proud of him. As soon as I saw him, I told him, “Dude, that was awesome.” He really did a great job. He showed more ass than I did in Showgirls, too. Look at that. They don’t make a big deal about that!

Is it a double standard?

Yes and no. I think Magic Mike wouldn’t have been made 10 years ago with big movie stars in it. There’s no way their agents would have let them play this 10 years ago, or maybe even seven years ago.

So, fried chicken. Will you ever look at a chicken leg the same after fellating one in Killer Joe?

Juno (Temple’s) like, “I don’t really like fried chicken. I don’t get it.” I’m like, “Yeah, you’re from London; you gotta have real Southern fried chicken.”

How was the fried chicken in Killer Joe?

In an interview with DIVA a couple of years ago, you said you wish you could be gay. Can you clarify what you meant?

It was one of those days. At that time I was looking around at my gay men friends and they were so hot and sexy and nice and I’m like, “Ugh, why can’t I be with them?” If I were a gay man, I could be! And then they would want me in that way. (Laughs)

That’s what all the straight girls say: That gay men are so hot but unavailable.

If you were lesbian, which character of yours would you hook up with?

Corky. That’s the most narcissistic answer, isn’t it? (Laughs)