A brilliant beacon of hope to millions of people worldwide, Olivia Newton-John has worked tirelessly for decades to help erase cancer as a world’s plight. Many people, however, became enamored with her as an actress and singer far preceding her heroic bout with breast cancer. For those of younger generations, Olivia is an example of excellence in many areas of life, an example you should get to know. Now in her early 60s, the English-born entertainer/philanthropist is stronger than ever.

The four-time Grammy winner and beloved actress of iconic films such as Grease, Xanadu and Sordid Lives, talks about her multifaceted career, her new flick, her A Summer Night Tour stop in Utah and her most aspired dream. 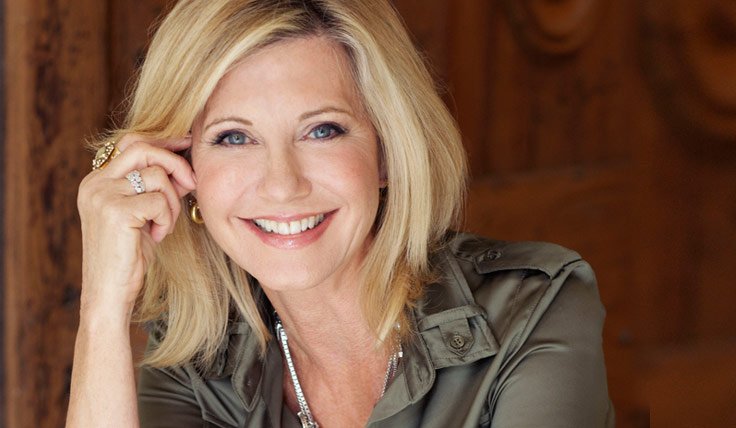 First and foremost, Olivia, you are a true angel among us. I have been an adoring fan for many years, and this is a great honor. Your life, your career, have been incredibly inspiring. Your philanthropy, your compassion, your optimism — I can’t always fathom them. What’s your secret? To be involved in all that you are, it must be extremely challenging. Oh thank you, that is very sweet. I’m very lucky to have the opportunity to use things that have happened to me in my life to help others. We all go through things — good and bad; it’s all about how you look at the situation and what you choose to do with your reaction. For example, when I was diagnosed with breast cancer in 1992 it was one of the lowest times of my life but, here I am, thriving and, almost 20 years to the day of my diagnosis, we just opened the Olivia Newton-John Cancer and Wellness Centre in my hometown of Melbourne, Australia. For me it’s the greatest billboard I will ever have — seeing my name on that hospital every time I drive up to it!

Your debut album, some 30 years ago, titled Let Me Be There certainly rings true to this day. Did you foresee this as a benchmark for your life, or just a noteworthy coincidence?  I can’t believe that was 1973! I’m just happy I’m still here and that I get to do what I love … and that people still turn up to see me. (Laughs)

As you know your hit films Grease and Xanadu were made into hit Broadway musicals, now being mounted all over the country. Have you ever been approached or interested in reprising one or both roles on stage? I mean, at least in reference to Grease, your age shouldn’t be a factor — you were 29 when you landed the role of high-school sweetheart, Sandy. Plus, I think the world would support it with open, loving arms. Oh, I think I am beyond the Sandy days. (Laughs) I was approached for the Broadway production of Xanadu to play one of the evil muses when it was running. I loved that show on stage and laughed harder than anyone else on opening night, but to do a show on Broadway is a really hard job — eight shows a week is a grueling schedule and I have such respect for those who do that all the time.

You were cast as Bitsy Mae Harling, a lesbian country singer and ex-con, in Del Shores’ Sordid Lives, which is a classic among the gay population; how did you come to get the part? As well as in the short-lived (unfortunately) television series. I saw the stage show in Los Angeles with my sister Rona (Del is a great friend) and I told him, “If you ever make a movie out of this, I want to be Bitsy!” Well, a few years later he called me … and then there we were on set! It was so much fun and everyone in the cast was so talented — we had a great time. The character was so different for me, which is what made her so much fun to play.

Tell us a little about your latest film, the Australian comedy A Few Best Men. Are you in the know of the film being released in the U.S.? Well, let’s just say it’s a wedding farce and I play the mother of the bride. I start off as a very proper wife of a politician and by the end of the film, due to various events, I … well, let’s just say I go off the other side and my character Barbara really lets her hair down. It’s directed by Stephan Elliott (Priscilla, Queen of the Desert) and it’s written by Dean Craig (who wrote Death at a Funeral). It was for sure the most fun I have had on the set of a movie. We filmed it in the Blue Mountains of Australia and the cast was amazing, from Xavier Samuel to Kris Marshall to Rebel Wilson, who I think is about to become a huge star in America.

We are still waiting on the USA release date; hopefully we have it soon as it’s been a huge hit everywhere else it’s been released in the world so far.

Your tour stop in Utah includes two nights of performances — give us a snippet of what to expect from the shows such as songs, theatrics, costumes — whatever you like. It’s going to be a fun couple of nights. Basically the concert is a retrospective of my (music) career from my first record nearly 40 years ago to songs from the new film, A Few Best Men. Of course there will be songs from Grease and Xanadu, my country years, some from my new healing CD, Grace and Gratitude, and of course a few surprises. I can’t tell you everything — we have to always throw in some surprises.

Your widely known single “Phyiscal” was banned from air play in Utah when it was first released in the ’80s. Do you have any comments on that and will it be part of your set in Utah? Oh, and the song was recently named the “sexiest song of all time” in a poll conducted by billboard.com. Comments? That was such a funny time for me. When I first recorded the song I told my manager, “Oh, we have to pull that song, it’s just too risque.” He said, “Too late, it’s gone to radio.” Of course it shot to number one so fast and became one of my biggest hits. Back when it was banned from the radio I was a bit surprised, but I compare that song to some of the songs today and it’s so tame in comparison! I think the fact that Billboard named it the sexiest song of all time is an honor. A good song is a good song.

The video for “Physical” was revamped for an episode of Glee, and starred Jane Lynch. What was it like to work with Jane? Jane was so much fun! We laughed so hard and I didn’t know she was such a big fan of mine. She told me she named one of her dogs after me and I thought that was so cute. She is so talented and it was great to have that time to work together. It was a bit spooky when we walked on to the set at Paramount as they recreated the actual set from the music video. It was such a flashback! That entire cast — Jane, the kids and, of course, Ryan Murphy, the creator, are all so talented.

Being an active supporter of HIV/AIDS research, which was once known solely as the “gay” cancer, what is your approach today in educating homosexuals about the disease? What advice would you give today’s LGBT youth about prevention? I am so happy that such progress has been made with research and treatment, and like any disease, the main thing is knowledge and early detection. My advice is to take care of yourself and your partners; just to be smart about how you treat yourself. Early detection is key to survival — from cancer to HIV.

OK, so I just have to ask this because as a young gay boy when Xanadu came out, I was enamored by, and desperately wanted, the white dress you wore in it — the one you’re also wearing on the cover of the soundtrack. Did you get to keep that dress? It’s hot! (Laughs, hysterically) I don’t remember. I might have it somewhere. Unless you’ve been raiding my closet! (Laughs). I do have my leather jacket and pants from Grease and one day I plan to auction them off to raise money for the Olivia Newton-John Cancer and Wellness Centre.

Everything I do today — from my new cookbook, Livwise: Easy Recipes for a Happy, Healthy Life, to my recording projects, they all have some connection so that money is donated to my hospital. It’s my dream that we find a cure for cancer in my lifetime.

I would love to see that dream come true for you, and for all of us.

A social change film based in Utah needs a kickstart

‘Romeo & Juliet’ gets a female facelift