Sweet and Sour are two brothers, separated at birth, in search of the perfect meal and a restaurant serving liquor before 10 a.m.

SOUR: Margaritas and guacamole? In Utah? We’ll be searching forever to find that ideal combination of ambiance; lime and tequila; and mashed avocado — the perfect semblance of Mexico. It’ll be harder than an Idaho congressman in an airport bathroom.

SWEET: Sure it’s difficult, but it will involve a lot of tequila.

SWEET: Rating margaritas in Utah can be hard, as our liquor laws require a tiny amount of tequila, which too often results in a margarita that tastes of nothing but corn syrup and cheap sweet and sour.

SOUR: It’s hard to say “sweet and sour” when our column is named SWEET AND SOUR.

Rio Grande is a classic, known for its ambiance and yes, margaritas. SWEET orders the classic margarita ($9) and SOUR gets the Top Shelf ($8).

SWEET: I always figured you as a top.

SOUR: Well, I like to think of myself as versatile, but generally, yes.

The Classic was overly sweet, with a cloying hint of bottled mixer. The Ultimate is better, the smoky Herradura Anejo cuts through the sweetness. The Top Shelf was another good choice, with a pleasantly strong orange flavor.

The guacamole was fresh and chunky, with just a hint of tomatoes and onion. The simple preparation lets the perfectly ripe avocado do the talking on the taste buds.

Next stop: Red Iguana II, where the usual hustle and bustle swept away the breezy atmosphere of Rio Grande. The basic margaritas were very serviceable, less sweet than Rio Grande’s basic. They make a fine accompaniment to Red Iguana’s excellent food, but not enough to make it a margarita-only destination. The pepina cucumber margarita ($6.50) was very refreshing but the thick cucumber puree masked any tequila flavor. SOUR’s Jalapeño margarita was spicy, as advertised, but that’s all it was — a thick and chunky one-note drinkable salsa.

Also disappointing was the guacamole ($9.40) which was, to put it nicely, Costco-esque and an unappealing brown. For a veritable food institution like Red Iguana, it was a major let-down. 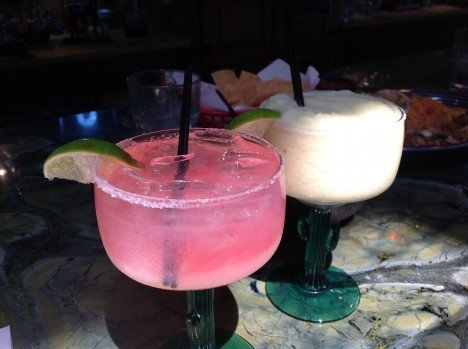 We went to Z Tejas on SWEET’s recommendation, who insisted that it was a great place for margaritas, if not food. SOUR was not excited, but his attitude turned quickly when our server, John, appeared.

SOUR: I won’t turn this into a love letter, but this kid is gorgeous and worthy of a trip alone; but we’re not here to talk about the most affable, friendly, lovely man I’ve laid eyes on in a long time.

SWEET: Um … when I said we were writing a column about things we’d like to eat, that wasn’t what I meant.
The basic was a bit too sweet, but the lime was fresh tasting. The Z-top was nice take, simple and very good. The 20th Anniversary was a blended margarita with a beautifully deep color of purple from the Chambord and tequila. The Pepper Melon margarita was a good blend of spice and sweet that didn’t overpower the tequila. The giant watermelon garnish might make one feel like a member of the Royal Court of the Golden Spike Empire.

But the stand-out for both of us was the guacamole: fresh avocado, cotija cheese, cilantro and pepitas, blended table side by John’s shaved, young, muscled arms.

SWEET: It was amazing!

SOUR: It was gorgeous, heavenly … so firm.

SWEET: Are we still talking about the guacamole?

Heading south to Tres Hombres, our attentive server, Alex, brought guacamole, which was OK but had an off-citrus note.

The drink menu is a dizzying array of more than 25 tequilas and margaritas. La Isla, was quite orange-y, but well balanced — like a tequila creamsicle. La Don was well-balanced, the tequila poking out like a man in boxer shorts.

Venturing into the more creative offerings, the Especial de Casa was a bizarrely refreshing blended margarita of avocado and cucumber, even if it could have stood another shot of tequila.

You’ll find Mexican haute cuisine at Frida’s, a pricey, but delicious place in the warehouse district. The avocado and other ingredients in the guacamole were balanced and wonderful. The Fresca Rita, was a good basic margarita, with some nice tequila flavor, but an unfortunate back note of fake margarita mix or Rose’s lime juice. The El Jefe top shelf was better, the tequila cutting the citrus and sweetness of the basic.

The specialty margaritas, such as the Cucumber and Black Pepper or the Grilled Pineapple Jalapeño, were tasty enough, but the large glass allowed the juices and spices to overwhelm any tequila flavor.

SWEET: So there you go. We know that there were a lot of great places we just didn’t have the time to get to.

SOUR: Yeah, once the acid reflux passes we could do a second part.