Wasatch Theatre Company gets their hands dirty in season 15 premiere

Started in 1997 by a group of Westminster College graduates as an outlet for recreational theater, Wasatch Theatre Company’s style of minimalism has been growing momentous. Their inaugural production was performed in the lobby of the Westminster Jewett Center; they then spent four years performing shows on weekends in a deli owned by WTC Artistic Director Jim Smith’s father; further productions were held in coffee shops, churches and the Columbus Center; today however, Rose Wagner Performing Arts Center is home-sweet-home to WTC.

“The most rewarding part of being artistic director of WTC is seeing people experiment in new and exciting ways with theater. We love seeing directors, actors and technicians emerge and grow from their experiences with us,” says Smith. “The biggest challenge in being artistic director is building an audience. We try to do pieces that speak to us artistically; however, it can be challenging to do this and still interest the public in what we’re doing.”

In September, WTC opens their 15th season with the three-time Tony Award-winning musical Avenue Q, an undertaking far beyond their standard experimental curriculum. Rick Rea, a Musical Theater graduating senior at Weber State University, who proposed the idea to WTC, is also directing the production, and while he says that some artistic licensing (experimentation) has been at the forefront of his mind, he feels that “to impose a radical new concept would likely destroy the production.”

“Take a musical like Godspell, which has probably been produced thousands of times, thousands of different ways,” Rea says in comparison. “You have so much flexibility because the content of the show allows you to go so many different aesthetic and artistic directions whilst staying true to the text. The same goes for most of Sondheim’s musicals (Sweeney Todd, Company, Assassins) — they leave so much to the director.

“Not so with Avenue Q. Now don’t get me wrong, our actors’ performances and my direction and choreography are fresh, original and as much as possible, distinctly our own. But the framework in which you can work in Avenue Q is tighter than many others. Avenue Q does not exist in a vacuum — it is very much a parody of a very specific art form (children’s television, specifically Sesame Street) and a very specific medium.”

Therefore, Rea avows that this WTC production will carry a similar look to other professional productions of Avenue Q, and he iterates it’s the right decision to make. “Our job is not to try to be different for the sake of being different, but to put on this show like putting on a costume and seeing how our voice, our life experiences, our love and our pain can bring them (the puppets) to life in a way no one else has.” 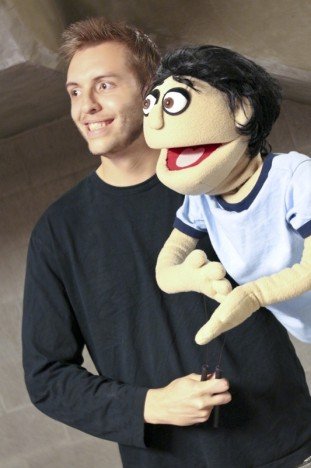 Speaking of the puppets, the company has brought in the original animations and puppets (designed by Rick Lyons) created for the Broadway production. “Every character is a dyed in the wool spin-off of either specific Sesame Street characters such as Bert, Ernie and Cookie Monster, or an archetypal character from the Jim Henson world,” Rea says.

George Plautz, a WTC board member, joins the stage crew as puppet master. “I’m creating the role of puppet master as I go, as I’ve never done it before,” says Plautz. “There are no guidelines, no money, just a lot of ‘hands-on’ fun. Mostly, it’s supervising the care and maintenance of the puppets, and helping with operational tips.”

Plautz, however, is not without experience with puppets. He is a playwright for the Starry-Eyed Puppets, a local puppet theater. “The genesis of the Starry-Eyed Puppets began when I helped form a traveling theater troupe, Bookspeak Theatre Company, which performed children’s books for schools, libraries,” he explains. “When it became difficult to get human schedules to work out, we reformed as the Starry-Eyed Puppets … puppets have no schedules and can’t talk back … most of the time. We do very Rocky/Bullwinkle-like shows, with songs and some irreverent humor for the parents to enjoy.”

Avenue Q is more adult-driven — at times, more American Pie-like — with songs and some irreverent sex for the audience to enjoy. According to Rea, the original content of the show will be left uncensored. In fact, he says that a couple of the numbers are perhaps a bit more colorful than in the Broadway show. “I was up literally all night two days ago choreographing three minutes of puppet sex,” he admits. “It’s a challenge but also a joy. These are the kind of problems I wish I always had!”

A satirical, biographical coming-of-age tale, Avenue Q follows a group of friends and neighbors in New York City, who are just starting out in life; they find themselves duped by their upbringing and unprepared for the realities of adulthood.
Rea conceptualizes the show as “the joy of disillusionment.”

“Seeing the actors on stage singing and dancing along with the puppets they are operating, you are simultaneously seeing the illusion (fantasy) and the modus operandi (reality),” explains Rea, “and you quickly realize that this is not a bad thing, but a wonderful thing. When you see things as they really are, and embrace the fact that your life sucks right now and you may never get your dreams, suddenly reality becomes OK. Disillusionment becomes liberation. And when you add to that a person, or people, or a community, that loves you and going through that stage with you, reality becomes a fantasy.”

“While we are playing all of the comedy to the fullest, there is an especially tender quality to this production,” Rea says. “Some of that comes from the concept and staging but a lot of it comes from a choice to cast not just talent but also people who exemplify love and community — there is no place for cynicism in this company or this show (though it may deceptively seem cynical, it’s anything but.) I firmly believe that Avenue Q is not only a great musical, but one of the very greatest in the history of the art form. We only hope to do it justice, and to entertain and inspire this community that we love so much.”