Another modern family is moving into prime time: Ryan Murphy’s The New Normal, premiering Tuesday, Sept. 11, on NBC, casts Andrew Rannells and Justin Bartha as gay dads going through a surrogate to raise their own little bundle of joy (and tears, and poop).

Known for originating the role of Elder Price on Broadway in The Book of Mormon, Rannells dished on breaking ground with a progressive family TV show, controversy from anti-gay groups and whether we can expect these gays to have more sexy time than the gays do on Modern Family.

You make such a cute dad. Are you aware of how many gays will want to have your babies?

(Laughs) Well, I don’t know about that. We’ll see!

What’s been the most fun you’ve had on set?

The episode we’re doing currently is one of the first times that we all get to work together on the same day. This episode is a big dinner party, so everybody’s there. Yesterday (I was) just shooting the shit with Ellen Barkin and NeNe Leakes. We’re a funny little motley crew of personalities here; it’s been a lot of fun getting to work with all these folks.

Do you think America is ready for a show about two gay dads?

I hope so. There’s obviously been a lot of progress in the past decade-plus in terms of gay characters on TV. In terms of gay families, Modern Family has done a really fantastic job with Jesse Tyler Ferguson and Eric Stonestreet’s characters – that was a good introduction.

I feel like in a lot of ways, this is the next step in terms of showing exactly what that whole process is of surrogacy, and really how much love and work and money it takes for a gay couple to start a family. I’m really excited that we get to show that for one of the first times on television.

What do you have to say in regards to naysayers like One Million Moms, who boycotted the show?

The silly part is that no one has seen it. So what that boycott is based on is a two-line description of what they read this show was about and, just based on that alone, they’re upset. That’s disappointing because ultimately what the show is about is how much love it takes to start a family – and not just our family.

To be greeted with such resistance and such judgment is disappointing. Ryan (Murphy) made a very good point that Ellen Barkin’s character really represents the right-wing Republican viewpoint in America. Ryan said One Million Moms might enjoy Ellen Barkin’s character because she’s sort of one of them. (Laughs) Every argument is made on our show and continues to be made.

How well did you and co-star Justin Bartha connect when you first met?

Justin and I had never met prior to him being cast. We had a lot of friends in common but had never really hung out or anything. We had one meeting before we got started, and just hit it off. We have a very good time working together.

In the last 20 years, what do you think of some of the gay people we’ve seen on TV shows?

It’s all steps in a very positive direction, as far as I’m concerned. As a kid, there wasn’t a whole hell of a lot on TV for me to watch in terms of gay people. I remember my mom loved thirtysomething and Peter Frechette played a gay character – that was one of the first gay people I’d ever seen on TV. Then Will & Grace came out the first year I was in college, so that was obviously very exciting.

What’s really cool to me is what Ryan has done with Glee in showing gay high school students. If I had been able to watch that show and see other young gay people on television, that would’ve been very comforting and empowering. Ryan obviously makes big strides in terms of gay characters.

America is warming up to the idea of gay characters – and not just as a sassy gay person, but being a person. A real character. And that’s just what’s so fun about this show. Certainly we are a gay couple, but we get to do a lot more than just that.

How do you think Bryan is more than just a stereotypical gay man?

I obviously get to be quote-unquote fabulous in terms of my outfits, but Bryan has a lot of heart and a lot of strength. It’s nice to get to play that; it’s nice to get to play someone with sass but also a lot of smarts and sincerity. To have the opportunity to show all of that is really fantastic. To completely strip all the sass away would be equally untrue; there’s a certain amount of sass and glamour that goes along with being gay. There’s a certain amount of fabulousness that is needed or wanted. But running around being fabulous day-to-day isn’t every moment of your life.

Is there fabulousness in your life?

Yeah, I try. I try to live with low-level glamour – absolutely! But with two varying degrees of success, I can’t always pull it off as easily as I’d like. (Laughs)

Ryan gave Modern Family a hard time for the lack of intimacy between the gay couple. You and Justin, however, kiss in the first episode – in bed! Do you think that’s Ryan’s way of reacting to Modern Family?

We’re telling a different story. This show has a different tone, and I’m happy to say that we’re showing a very romantic side to this couple, which is great. It’s really thrilling to get to do. Justin and I have filmed some really great scenes together that are real, honest, flirtatious and sexy. Obviously people have really embraced Modern Family – audiences love that show and they love Eric and Jesse, so they’re clearly doing something right. I’m a big fan of that show, but they’re just different. Yes, we’re going to be more affectionate, but it takes nothing away from what they’re doing. 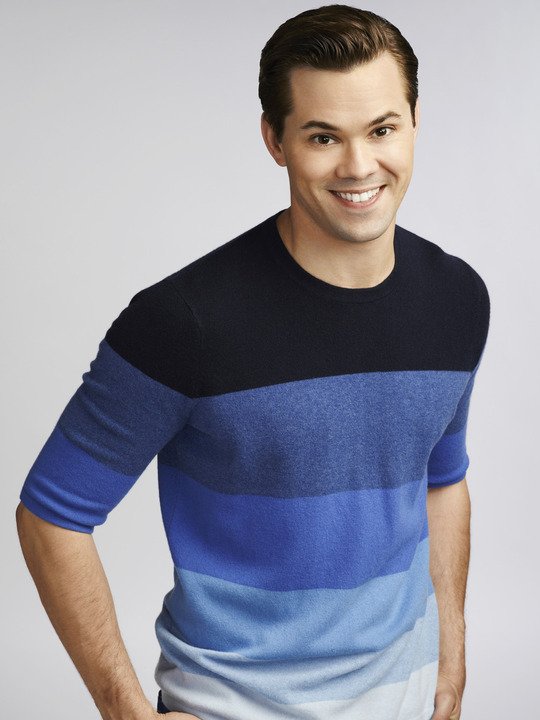 There’s a heterosexual sex scene in the premiere episode. Will you ever get that intimate with Justin?

I don’t know if we’ll necessarily be riding each other. I don’t know about that! (Laughs) But we shot another scene in bed together just this morning, actually. There’s definitely more of that, but we’re not on cable; we’re on network. I don’t know how much sex we’ll actually get to do. Maybe down the road. I’ll see what I can do. (Laughs)

What kind of responsibility do you feel portraying one of the first major gay families on television?

As far as how it’s received and how people perceive it, we’re obviously not in control of that. I’m optimistic that we will find an audience, and I hope that people find it effective and moving and funny, but we’ll see. My focus right now is telling the story to the best of my ability.

Has playing a dad on TV influenced you becoming a real-life parent?

It hasn’t yet, but I haven’t been in the mindset to start a family, either. I’ve been career-focused. I have thought about that: I wonder if this process will sort of change my mind about that as we get into these scenes with sonograms and things like that. Will I feel differently? Who knows. Maybe I’ll want one myself. I have seven nieces and nephews, and that’s good for me right now.

Why do you gravitate toward gay characters?

I’ve been lucky, particularly with (HBO’s) Girls. That was a really well-written, really funny and very well-developed gay character. I was pleased about that. Then, as far as Bryan goes, it was, again, a really wonderful opportunity to play a really great character. I don’t really think about the sexuality of (the character) so much, but I do recognize the fact that I’m very lucky, particularly as a gay man able to play these gay parts that are really developed and are good roles.

Because those roles oftentimes go to straight actors?

Absolutely. Which is very strange to me. I mean, it’s like any acting job. I’ve played a lot of straight characters, too, and if I had been denied those because I was gay, I would’ve been pissed. It comes down to who’s best for the part, so I get that. But it is refreshing for me, as a homosexual, to play these gay characters. It’s nice to get to play somebody who’s a little bit closer to who you are.

Tell me about your role as a stripper in Bachelorette.

It was the most eventful two days of work for me. The first day was super fun because it was just me and Isla Fisher – she’s so cool. Then the next day, I had to rip off some tear-away cop pants in front of Kirsten Dunst and 40 extras.

Right. No big deal! That was nerve-wracking, but I think that movie is really great. I’m very proud to be a small part of that.

Where did you get your stripper moves from?

There’s an event in New York called Broadway Bares. I was in the show but I didn’t have to take off my clothes, so I asked a couple of friends of mine who had done the show: “What’s the trick with tear-away pants?” So I got some tips. That was my big rehearsal. We didn’t really get to rehearse it at all. I just had to rip off my pants.

What do you miss most about your role as Elder Price in The Book of Mormon, which you wrapped up in June?

I miss doing the show every night, I miss performing in front of that audience and I miss my cast. That was almost every day of my life for two years. I was wrapped up in that show with those people so it was hard to leave, obviously. I had the best-case scenario because I was leaving to do another job.

That job changed my life. I certainly wouldn’t be where I am right now without it. All I wanted to do when I moved to New York 15 years ago was open a Broadway show. The fact that that was the show I got to open – I don’t think you can really ask for more as an actor.