Delaware Republican State Senate candidate Eric Bodenweiser, who is a member of the Family Policy Council, has been arrested on suspicion of child molestation. The indictment includes 113 felony sex charges, including 39 counts of unlawful sexual intercourse. The indictment does not identify the gender of the victims; however, The Grape Gazette identified a man who was allegedly sexually abused by Bodenweiser between 1987 and 1990. He was endorsed by the Family Policy Council, but has since been removed from their online voter guide.

Utah lawmaker stands up for intern convicted of sexual abuse

Republican Utah Rep. Wayne Harper asked a judge to show leniency on a former intern who has been convicted of sexually abusing a teenage girl. Prideinutah.com first reported Eric Ray, who was convicted of sexual abuse in a 2010 case, is receiving backing in the form of a letter of recommendation from Harper. The letter calls Ray “dependable and reliable.” Harper is part of a Republican coalition that has repeatedly blocked attempts to ban discrimination based on sexual orientation and gender identity.

Prime Minister under fire for using ‘gay’ as an insult

New Zealand Prime Minister John Key is under fire for mocking a radio host’s red jacket, suggesting he’s a weak golfer because the jacket’s color is “gay.” His comments came shortly after he called soccer player and gay ally David Beckham “thick as bat shit.” Key defended his use of the word “gay” in that context by later saying, “A hell of a lot of people would use it and the common use of it is in the Oxford dictionary.” He said the word also means, “weird.” 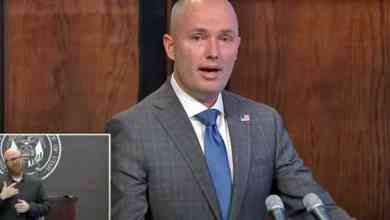 Gov. Cox: transgender sports bill among the most difficult this session