For a good chunk of Kathy Griffin’s run, the spitfire comedian’s touted herself as a washed-up celebrity who nobody really cares about.

Griffin’s rips on the Hollywood elite – and Snooki – have opened up a world of opportunities: My Life on the D-List, her Bravo talk show, a book deal, sold-out concerts and a relationship with Anderson Cooper that we could only dream of.
The woman who likes to take on everyone else takes on herself in our completely ridiculous interview. Griffin gives tips on making fun of her, presents her plan for running this country if she were president and admits that she sometimes forgets how funny she is.

Who’s your favorite person to make fun of at the moment?   I’m gonna go with Demi Lovato because she seems to have no sense of humor about herself and she has a rather checkered past, and that is a great combination. And she changes the color of her ponytail almost daily. Sometimes it’s blue, sometimes it’s pink – I like that stuff.

No Anderson Cooper? Would that be weird?   Not for me! 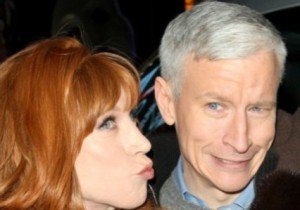 Which women are in your binder?   My binder is chock-full of women. It’s overflowing with women. My binder is filled with Gloria Steinem, Jane Fonda, Suze Orman, Marlo Thomas and a lot of young, smart, aspiring chicks: Olivia Munn, Scarlett Johansson, Rosario Dawson, Kerry Washington – the girls that seem to have a few brain cells working. You know what’s weird? Somehow I also found room for Oprah. She was in the final flap.

Go-to karaoke song?   “No Scrubs” by TLC. It’s always a crowd-pleaser. And “Waterfalls” can be so pensive.

Say you have a magical power, what would it be and how would you use it?   That’s easy. It would be to make people more open-minded, because of course, this being election year, I feel like we’re somehow turning back the clock. As far as LGBT rights are concerned, we’re sort of going forward, but as far as women’s rights and a lot of issues that are on the ticket, we’re kind of living out a bad episode of Mad Men. So, it would just be the power to say to the United States of America, “Calm down, girl.” And I would spell it g-u-r-r-r-l. Because I feel like when people get upset about whether gay people should be able to get married or women should make equal wages, they have these nonsensical and illogical reasons for why they are opposed to these things, so I would just like to collectively say, “Calm down, gurrrl. We’re all gonna be fine. It’s OK to have a little progress.”

We already know everyone in Hollywood is scared of you.   Good.

How could someone be successful at making fun of you?   Oh god. It’s so easy. I mean, obviously things have rolled off my tongue and fallen out of my mouth that are cringe-worthy, so things I’ve said. You could make fun of me for … god, a myriad of things. I’m, like, neurotic. You can always make fun of my mom – that’s throwing her under the bus a bit, but I never get tired of it. You could make fun of my Catholic upbringing and how it went so horribly wrong. My love life is usually in shambles, too. It’s open season on my life.

How does your mother, Maggie, feel about your use of that word?   My mother says this thing. This is so ridiculous. She says “feck,” and that’s an Irish thing. It’s an old Irish-Catholic thing where they think if you say “feck” it’s like a clean way of saying fuck. My mother also says “whoo-re” because she thinks she’s fooling you, so if she’s going to call one of the Kardashians a whore, which she might if she has enough wine in her, she will say, “Look at those whoores,” and think she’s fooling you. And maybe if you’re from a suburb of Dublin you’ll get that reference; my mom is not afraid to make a reference from the turn of the century – the last one.

If you were president, what would you promise the people of the United States?   I would promise … well, actually, I don’t know how I would promise it because good luck with Congress. But I would fire them. I would fire Congress and hire all Lady Gaga backup dancers; if they can get through that show, they can run a country.

I would run the country in a way that makes sense. I feel like we’re all waiting for that politician to say something that makes sense and they’re all so scared to say something like, “Yes, we should all have equal civil rights. Yes, men and women are equal. Yes, LGBT people are equal. We shouldn’t practice tolerance; we should practice actual kindness.” How about that, fuckers? That would be my campaign slogan: How about that, fuckers? It would be the Hey Gurrrl campaign of 2016.

I would actually resign and I would appoint Suze Orman as president, which has never happened before. You’ve never actually had someone say, “Well, thank you for electing me,” but the more I think about it there is someone a little better for the job and her name is Suze Orman.

Please describe, in detail, Anderson Cooper naked.   He’s creamy and dreamy. He’s as pale as I am, muscular and his eyes are just as blue naked as they are with clothes on.

What makes you cry?   Honestly, I can cry at a fucking commercial. It takes almost nothing to make me cry. Like, if I see those frickin’ ASPCA PSA commercials for the dog shelters, I don’t even need to hear the Sarah McLachlan song; even if I just see the images, I will start sobbing and I will then grab my own rescue dogs, who, by the way, have zero appreciation for the fact that they are fucking rich.

I’ll cry at Olympic commercials, too. And I love a slow clap. I don’t even like sports, but I will cry if there’s a sports movie and the guy with one leg gets a touchdown or a basket.

If you could turn back time like Cher, what experience would you want to relive all over again?   You know what’s funny, I was actually thinking of turning back time and going back to the ship with Cher and putting her back in the outfit from the “Turn Back Time” video.

There’s so many I would relive again. My great times with the divas: time I actually got to spend with Bette Midler, Joan Rivers, Cher, Jane Fonda, Gloria Steinem and Gloria Vanderbilt (Anderson Cooper’s mom). I just love those gals, and I know you guys do too, and you get them and you love them and you support them. It’s something that’s the most important thing to me.

Author, TV host, singer, public pap smearing – what’s left?   Look, I am so excited about the Kathy talk show on Bravo. We’re coming back on Jan. 10. I hope we stay on; I think we’ll stay on. I am so looking forward to the guests. Last year I did a show with Jimmy Kimmel and two gays; I did a show with Jane Fonda, Lisa Ling and Sharon Osbourne. I love the combinations of people and mixing them with the topics that we’re talking about around the water cooler – that is really what I’m looking forward to most. I’m still kind of working on the Kathy show, seeing what works about it and what you respond to, so that’s still a work in progress that I’m really excited about.

Who do you most want on your talk show when it returns for a second season?   You know, it’s not about most; it’s more about who’s going to have fun doing it. We’re talking to everybody on the planet and all these unusual combos of people and seeing who’s going to be in Los Angeles. I joke that I am bored with anybody under 80, because my dream talk show would be my mom, Gloria Vanderbilt and, you know, Jackie Collins. (Laughs) I guess there are some people under 75 who are interesting; I’m just looking for them. Of course I’d love to have Cher on the show. I’d love to have Anderson on again; he’s so much fun. I’ve also been talking to (Kristin) Chenoweth and Megan Mullally and her husband Nick Offerman (who plays Ron Swanson on the NBC comedy Parks and Recreation). All these people are just great. The type of person who’s just game for anything is my dream guest.

Who should play you in your biopic?   The vain part of me wants Christina Hendricks, but it could end up being Andy Dick.

Song you love most on Taylor Swift’s new album?   Well, obviously the break-up song (“We Are Never Ever Getting Back Together”) because there’s something so hilarious to me that she’s writing a really silly, fun, insipid song about Jake Gyllenhaal while he’s promoting his shaved-head, gritty, South-Central L.A. crime movie. There’s something funny about a split screen of a clip from that movie and then a split screen of Taylor singing, “Never, ever, ever, like I am never going out with you, like never. Don’t even call Jake Gyllenhaal. I’m serious this time. It’s me, Taylor.” Look, if she didn’t get crabs from John Mayer, then she’s gonna live a long, safe life.

Queer-inclusive soap opera to be filmed in Utah